Beltane and the Reclaiming of Spirit 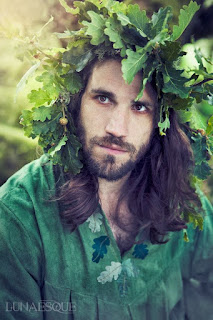 Yesterday was Beltane, the Gaelic May Day festival. In ancient times it was generally held throughout Ireland, Scotland and the Isle of Man at some point halfway between the spring equinox and the summer solstice and marked the beginning of summer. It was the time when cattle were driven out to the summer pastures and when rituals were performed to protect the cattle, crops and people, and to encourage growth.

In modern day Britain, Beltane continues to be celebrated; and, as you'll read below, is considered by some as a path to "rediscovery of what it means to be a human living in the world."

I see in festivals like Beltane an opening towards a new paradigm, a rediscovery of what it means to be a human living in the world. For the past half a millennium, our culture has placed more and more emphasis on the individual. We’ve separated the individual from the community, just as we’ve separated mind from matter and nature from culture. In doing so, we’ve separated consciousness from the physical, and carved up the world into a mathematical model where value exists only in numbers and everything is leveled down. We belong everywhere and nowhere, existing paradoxically as both masters of nature and as insignificant specks in the universe. There is no room in this worldview for the sacred. “God is dead” said Nietzsche, as this era began to culminate, “and we have killed him”.

Of course, there have been wonderful benefits from this rise of materialist individualism – modern science, medicine, technology, on the one hand, democracy and educational opportunity on the other. Yet as we push this paradigm through to its logical conclusion, we also encounter a darker side, epitomised by neo-liberal capitalism and the accompanying exploitation and environmental destruction, as well as a yawning gap in our souls, a lack of meaning that cannot be filled by shopping or by the 9-5 cycle of busywork and bar-hopping that is offered by the modern economy.

I see festivals like Beltane (and not only Beltane) as some of the first footsteps towards filling that gap. In that sense, we are not a ‘modern’ festival, and certainly not postmodern, but neither are we (nor should we, nor even could we) returning to some previous era. Yet in acknowledging the roots that ground us, exploring pre-modern ceremonies with modern eyes, we become pioneers of a new, un-named era.

The reclaiming of spirit that I see in Beltane is not a resurrection of old gods, but a way of understanding that we are part of something bigger than ourselves, of something which is more than the sum of its parts, in a way that transcends intellectual understanding. It’s a way (and not the only way) of experiencing magic and transcendence without playing make-believe.

By celebrating the season’s turn, we tune ourselves into the land around us. . . .

– Josh
Excerpted from "When We Dance Together, We Dissolve"
Beltane Fire Society
April 30, 2016 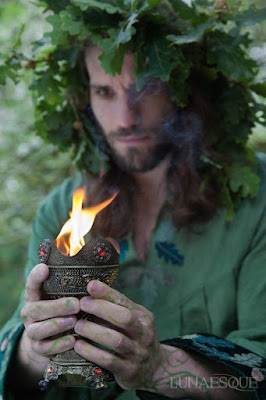 I am the bright pavilion and the feasting,
I am the wedding couple and the bed,
I am the morning chorus and the heartbeat,
I am the goal to which all paths are led.

See also the previous Wild Reed posts:
• A Return to the Spirit
• "I Caught a Glimpse of a God"
• Integrating Cernunnos, "Archetype of Sensuality and the Instinctual World"
• The Body: As Sacred and Knowing as a Temple Oracle
• The Piper at the Gates of Dawn
• The Devil We (Think) We Know
• The Pagan Roots of All Saints Day
• Celebrating the Coming of the Sun and the Son

He writes:
"In the very simple ritual of gathering around the bonfire, we connect to every ancestor who ever gathered by a fire and remember that we are not fixed points, but a living process, part of a greater living process that existed long before us and will outlive us all."
He mistakes feelings, and the sorts of ecstatics that can come from a focused group, for a connection to an imagined past. Any person at a rock concert, or different sorts of theatrical events, can enjoy this same kind of connection to the people around them and the environment they are in. The right kind of mushrooms will get you to the same place. I've had all these experiences, and of course they have some value. Yes humans are part of a process so much greater than us, but it is not necessary to fashion a poorly imagined and executed costume and play pretend pagan in the woods to recognize and respect this. In fact, this pretending holds people back from any genuine connection to the world we actually live in.

I wonder, though, how else can we experience connection to that process you identify and recognize as "so much greater than us," other than through our feelings and emotions? Also, one person's "pretending" is another's profound mystical experience. I'm hesitant to pass judgment of such things, preferring instead to simply observe and note what results from the encounter/experience. Does it promote human flourishing and community-building and social & environmental awareness/activism? If so, than in my opinion it is something genuine and thus worthy of support and encouragement.