Called to the Field of Compassion 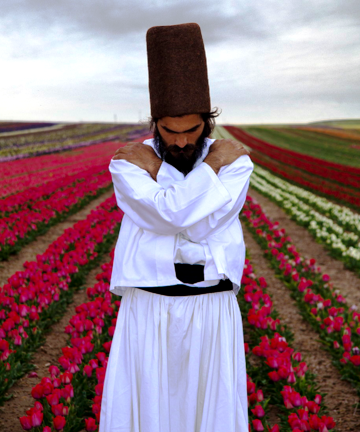 I can't recall where I found the image above, but it's one that I really love. It shows a dervish standing in a flowering field. He looks very intentional, don't you think? I see him as preparing to dance a prayer of praise and surrender to the Divine Presence.

Part of this image's appeal is to do with the fact that for quite some time now I've understood myself to be a dervish – as one who stands, metaphorically, at a doorway – on the threshold of something. This something could be a new experience, a new phase of life, the next stage of a journey in awareness about oneself and/or life. It's something that usually contains both positive and negative aspects. For example, it generally feels uncomfortable, even scary to consciously move toward that which we know will change us, will transform us, even as, at a deep level, we know that such transformation is of divine origin and is what we long for. With all this in mind, I understand myself as not only a dervish but also a mystic, as one who desires and seeks intimate union with, and thus transformation by, the Divine Presence within and beyond us all.

I've come to trust that our individual and collective union with the Divine is changing humanity. I believe increasing numbers of people are living and serving as a collective dervish for humanity, ushering in a new way of being, a new level of consciousness.

In her book Field of Compassion, Judy Cannato explores this paradigm shift of which humanity is in the midst. It's a shift into a new level of consciousness, of awareness of our interconnection with and interdependence of each other, the planet, and the Divine Presence that imbues all things. She calls this type of awareness cosmic or unitive consciousness. Others refer to it as Christic consciousness. I believe it can also be understood as what Albert Einstein said in 1949 was that “new type of thinking . . . essential if humanity is to survive and move toward higher levels.”

This thinking has always been with us, but at this point in human history it's becoming the predominant way of thinking and being. For many, that's very hopeful and exciting. For others it's very scary, prompting them to fearfully retreat into a fortress mentality and embody lower level of consciousness, such as tribalism. One way we're seeing this being played out is in the rise of Donald Trump, with all its attendant fear, racism, xenophobia and violence.

I think it's true to say that Donald Trump and his supporters do not embody unitive consciousness. Nor do they display an openness to the paradigm shift taking place around them. But others – many others – are open to it, and are embodying it in their thoughts and actions. Following is how Judy Cannato describes the characteristics of such people and their relationships. Perhaps in this description you'll see yourself and/or the people and types of relationships that inspire you and give you hope. I know I do! (See, for example, here, here, here, and here.) And what with all that's happening in our world at this time, we surely need such inspiration and hope.

Imagine that the new human being – one with cosmic or unitive consciousness – has already arrived on planet Earth. . . . What characteristics will be both descriptive and essential? What will relationships look like? How will institutions look, and what will they be about? What will life on planet Earth look like when the new consciousness takes hold?

[I believe] that the new human being and its morphogenic field have already emerged. . . . The characteristics of the emerging human consciousness are not startlingly new. They flow out of the old and have been part of our consciousness for a very long time. Yet now they are named and spoken with a newfound conviction and urgency.

The characteristics so often named include love, care, compassion, freedom, courage, unity, simplicity, solidarity, belonging, diversity, empowerment, harmony, equality, and hope. Images that keep repeating are the circle, the spiral, and the dance. The new human is intuitive, has a sense of the whole, lives with integrity, has the ability to make sacrifices on behalf of the whole, is discerning, and takes risks. Relationships are based on mutuality and respect and genuine concern for the common good and are inclusive of everyone, including Earth itself. The new human is both prophet and mystic. The prophet is engaged in the material world, sees with great clarity, and calls the species to grace. The mystic is engaged in the transcendent world, drawn toward incomprehensible holy mystery and unafraid of grace. But far from being separate engagements, the prophetic and mystic roles entangle and have a unitive flow about them.

. . . The new humam who manifests a Field of Compassion not only receives grace but becomes grace. Once we enflesh it, we join with the Holy as co-creators who manifest grace in the world. It is not that we have never done this before – we are always living, breathing manifestations of grace. But most of the time we have been unaware, and awareness, clarity of vision, and the ability to focus – these are essential as we enflesh grace consciously in his moment of cosmic history. This work is at the heart of our capacity for self-transcendence; indeed, it is the fulfillment of self-transcendence itself in our time and in our day.

. . . The more whole we are, the more vital will be our relationships. We will bring into our being with others a sense of self in which egocentric need is diminished and the ability to connect whole-to-whole is possible. I think this is perhaps where the life of Jesus is so helpful for us. We see the wholeness in his strength, conviction, and courage. He never seemed to relate to others except from a place on integrity, mutuality, and love. He taught with an authority that came from the knowledge of the Holy Unity, not from any need to control. Those who listened and were caught by his message responded authentically – because he himself was authentic.

– Judy Cannato
Excerpted from Field of Compassion:
How the New Cosmology is Transforming Spiritual Life
pp. 162-165

See also the previous Wild Reed posts:
• In the Garden of Spirituality – Judy Cannato
• Why Jesus is My Man
• Jesus: Mystic and Prophet
• “Joined at the Heart”: Robert Thompson on Christianity and Sufism
• Sufism: Way of Love, Tradition of Enlightenment, and Antidote to Fanaticism
• Michael Morwood on the Divine Presence
• Genuine Authority
• Gospel Leadership
• The Model of Leadership Offered by Jesus