The State of Marriage Equality in Australia 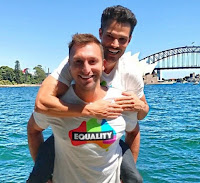 Back in the U.S., I'm always embarrassed when friends ask about the state of same-sex marriage in Australia. More often than not they assume marriage equality is a reality.

Indeed, even though polls consistently show that over two-thirds of Australians support granting civil marriage rights to same-sex couples, the state of marriage equality in Australia is pathetically behind much of the rest of the world.

Alas, the "Great South Land" does not.

This fact has been in the news recently with the conservative Coalition government of Prime Minister Malcolm Turnbull announcing a $122 million postal vote (or plebiscite) on the issue of marriage equality. Ballots will be sent to all registered voters in five weeks, starting September 12, with a final decision by November 15.

So, in short, marriage equality in Australia is to be put to a public vote.

Turnbull, who has previously said that a postal vote on the issue "flies in the face of Australian democracy," now insists that the poll would be legitimate and also consistent with the Coalition's election commitment.

Following is an erudite and insightful commentary on the political history of rather messy matter by Mark Kenny, national affairs editor of The Sydney Morning Herald.

The Truth is, Both Sides
Have Struggled with Marriage Equality

The brouhaha over marriage equality has seen Malcolm Turnbull's Coalition trying to look modern while putting as many barriers as it can think of in the way of change.

It is a process driven primarily by internal considerations within the conservative base and Turnbull's assessment that his pushing through would imperil his leadership.

Such dualism is not unique to the Liberal and Nationals parties. Labor MPs are hypersensitive to criticism of their mediocre performance when faced with the same question while in office.

Many Labor MPs who now back reform and stand strongly with same-sex couples arguing for equality as a human right, would rather forget past equivocations.

As they strafe Turnbull's unwillingness to impose his will, they bristle when reminded that just five years ago, their prime minister Julia Gillard, deputy PM Wayne Swan, and a slew of influential frontbenchers, voted "No", as they danced to the tune of the Catholic right wing.

Even now, if this issue makes it to the Senate, it is expected half a dozen Labor senators aligned to the shoppies' union, the SDA, will either oppose or abstain.

Indeed, a parliamentary vote, cannot be guaranteed to deliver marriage reform as the numbers in both houses are closer than many realise.

In any event, now that the compulsory attendance plebiscite has been scotched, the government is proceeding with plan B, the voluntary participation, postal survey.

Two points about where this leads.

First, there's the franchise question about the postal plebiscite and the expectation that the returns will strongly lean towards the older demographic and therefore the "No" case. The last voluntary postal ballot was conducted in 1997, to determine the members of the constitutional convention. Analysis of that does indeed show a strong linear relationship between age and participation.

The older you were – and remember this was before the Facebook generation and before commerce, and personal administration were shifted from the physical world to online – the greater the likelihood of returning a ballot paper.

Indeed, those aged 56 and above were 75 per cent more likely to lick the stamp than those aged 18 to 25 years.

You can see how this might skew the outcome on marriage reform in particular, especially bearing in mind the trajectory of opinion on this issue.

In political-speak, Labor MPs say their opinions have "evolved". Others might just admit to being wrong in the past.

Second, the government cites as precedent the Australian statistician's conduct of a 60,000-strong phone survey in 1974 to approve a switch from God Save the Queen to Advance Australia Fair.

The "Yes" case prevailed with just 51.4 per cent support.

More than four decades later, we are going back to technology that pre-dated the phone even, in a bid to delay an "advance" whose denial would be anything but "fair."

NEXT: The State of Marriage Equality in Australia – Part 2

See also the previous Wild Reed posts:
• Thoughts on the Australian Catholic Bishops' Latest Ploy in Their "Struggle for the Very Soul of Marriage"
• From Australia, "Possibly the Most Beautiful Ad for Marriage Equality"
• Lanae Erickson on Taking a Lesson from Down Under
• Quote of the Day – July 13, 2015
• A Catholic Statement of Support for Marriage Equality
• Tips on Speaking as a Catholic in Support of Marriage Equality
• Marriage: "Part of What is Best in Human Nature"
• Responding to Bishop Tobin's Remarks on Gay Marriage
• The "Gay Civil Unions" Approach of Some Within the Catholic Hierarchy: Too Little, Too Late
• New Studies: Gay Couples as Committed as Straight Couples
• Competent Parenting Doesn't Require "Traditional Marriage"
• Progressive Catholic Perspectives on the U.S. Supreme Court's 2015 Marriage Equality Ruling

Like you I am an ex-pat. I moved to New Zealand in 2010 and last year I proudly became a Kiwi. While I still own an Australian passport, I only use it when visiting Australia and I would rarely do that if I did not have family and friends there. I say I am Aussie by birth but Kiwi by choice. I guess you, like me, lost the right to vote in Australia, having left for 6 years, I was able to vote in New Zealand after 1 year of permanent residency. Unlike Kiwis who moved the other way I also gained all benefits. I was over 65 so was given the aged pension backdated to my arrival date, my much lower (due to the assets test) Australian pension is paid to the NZ government. I had to wait 2 years for non urgent surgery but that was the only restriction. I did not become a Kiwi to gain any benefits. In 2013 Same-sex marriage was overwhelmingly passed by a free vote in the NZ parliament. It was in the news for a few weeks then disappeared. Most of my (over 60's) friends just said "Why not?" The prime Minister at the time voted in favour, the Deputy (now PM) voted against, he is a devout Catholic, but has now announced he believes he was wrong and would now vote in favour. I regularly state New Zealand is 2 hours ahead in time but years ahead in social and political development.

Thanks for sharing your experience and perspective, Brian.