In Australia, "Love Has Had a Landslide Victory" 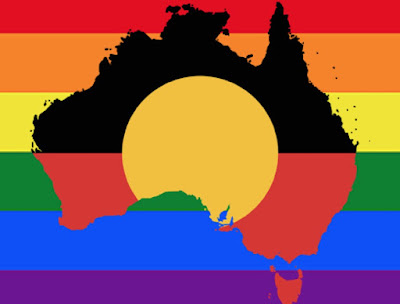 Good news from the country of my birth: Australians have voted in favour of allowing same-sex couples to marry in a landmark national survey.

The Yes vote triumphed with 61.6 percent of the vote, while 38.4 percent voted No.

I take this opportunity to thank all my family and friends in Australia who voted Yes in the survey. And an especially big thank you to my Mum who, after Mass one Sunday evening, gently yet firmly challenged her parish priest over the Catholic hierarchy's support of the No campaign (despite the fact that Catholics themselves comprise one of the largest groups in Australia supportive of same-sex marriage). Of course, my mother's support isn't that surprising given my parents' loving and proactive support over the years of me and of gay people in general. (See, for example, here and here.)

Following, with added images and links, is Michael Koziol's report in The Sydney Morning Herald on this "landslide victory."

Australians have emphatically voted in favour of legalising same-sex marriage, saying "yes" to the historic social change by a substantial margin of 61.6 per cent to 38.4 per cent.

After years of political stagnation, the public has now tasked the Turnbull government with changing the law before Christmas to allow same-sex couples to marry. 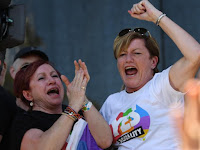 Almost 80 per cent of eligible voters participated in the unprecedented voluntary postal survey, giving the verdict an authority unmatched by most elections globally. It means Australia is poised to join 25 other countries that have granted marriage equality to gay couples, including the US, Canada, New Zealand and the United Kingdom.

At street parties across the country, gay and lesbian Australians cheered, danced and embraced as the results were announced by the chief statistician on Wednesday. 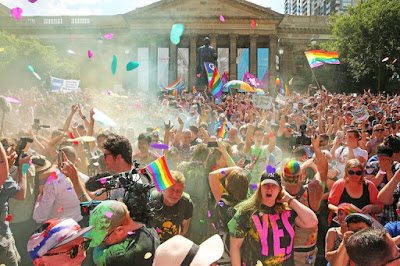 It is a landmark moment in Australia's mixed civil rights record: it was one of the first countries to give women the vote, but still struggles with Indigenous reconciliation and is one of the last English-speaking democracies to legalise same-sex marriage. 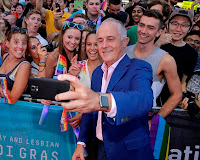 The result is also a significant victory for Prime Minister Malcolm Turnbull, of the ruling centre-right Coalition, who is a longstanding supporter of same-sex marriage and firmly believed the "yes" vote would prevail.

"Love has had a landslide victory," declared Alex Greenwich, co-chair of the Equality Campaign, from a public gathering in Sydney, where John Paul Young's classic "Love Is In The Air" was played. "Getting to this point has not been easy, but rarely in your life can you celebrate with such pride overcoming adversity to make history." Mr Greenwich said the campaign's support and momentum had exceeded all expectations, and the result had delivered "an unequivocal mandate" for politicians to vote through the change by the end of the year.

Every state and territory voted "yes" by more than 60 per cent except for NSW, where the "yes" vote was 57.8 per cent, and the "no" vote was 42.2 per cent. The ACT had the highest "yes" vote in the country at 74 per cent, followed by Victoria at 64.9 per cent. Participation in the survey exceeded 70 per cent across all age groups, including younger voters. Almost 80 per cent of 18- and 19-year-olds voted, the ABS revealed, with the lowest turnout (71.9 per cent) among 25- to 29-year-olds.

Mr Turnbull, speaking shortly after the results were announced, heralded the "overwhelming" support Australians had expressed for same-sex marriage. "They voted 'yes' for fairness, commitment, love," he said. "It is unequivocal, it is overwhelming. "And now it is up to us, here in the Parliament of Australia, to get on with it - to get on with the job the Australian people have tasked us to do, and get this done this year, before Christmas. That must be our commitment." The PM's electorate of Wentworth, in inner-city Sydney, recorded one of the highest "yes" votes in the country at 80.8 per cent.

The results surpassed the expectations of many "yes" advocates in the government, who were eyeing a figure of 55 to 60 per cent. It almost matched the 62 per cent recorded at the Irish referendum on same-sex marriage in 2015.

Gay Liberal senator Dean Smith, who spearheaded action for same-sex marriage within the Coalition but opposed the public vote, declared it "the most important electoral mandate" Australia had ever seen. "This is by any and every measure a huge democratic achievement for our country," he said. "I have never been more proud to stand up and represent Australian people than I was this morning when I listened to that result."

Gay Labor frontbencher Penny Wong, who pushed her own party to change its position on same-sex marriage, was hugged by colleagues in a room in Parliament House as they watched the results announcement. Later, she thanked Australians for their "resounding" verdict and spoke of how difficult the public vote had been for the LGBTI community. "I hope from this you can take a message of solidarity, of support, of decency from your fellow Australians," Senator Wong said. 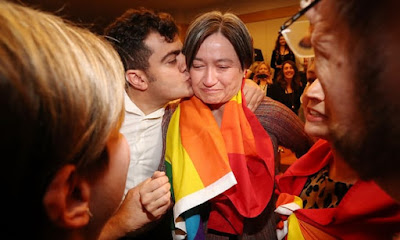 Above: Labor senator Penny Wong, one of the most prominent advocates of the Yes campaign, breaks down after the announcement of the same-sex marriage survey result on Wednesday morning. (Photo: Mike Bowers for The Guardian) 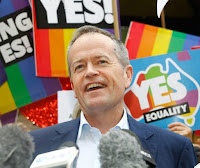 Opposition Leader Bill Shorten, speaking to a jubilant crowd in Melbourne, said the emphatic verdict was "not just good for marriage equality" but showed "Australians have voted for a generous view of themselves, for a modern Australia, where diversity is accepted, supported and respected. "Today we celebrate, tomorrow we legislate."

The de facto leader of the "no" campaign, Australian Christian Lobby director Lyle Shelton, conceded defeat and said he accepted the democratic decision of the Australian people. But he said "in a democracy, no question is ever completely closed", and held out hope of one day changing Australians' minds and redefining marriage as being between a man and a woman. "There may be a time in the future when we can persuade our fellow Australians to that position once again," Mr Shelton said.

Debate inside and outside Parliament will now turn to the legislation to enact the change. A bill by Senator Smith, endorsed by Mr Turnbull, will be introduced into the Senate this week, and fierce argument is expected over religious exemptions in the coming parliamentary fortnight.

The PM said he expected a "very lively debate" that would showcase "Parliament at its best". 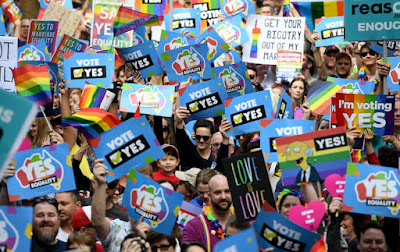 Opening image: An outline of Australia with both the Australian Aboriginal Flag and the Rainbow Flag.

Wonderful news, Michael. Discrimination is so ugly, I'm ecstatic to see it overcome by love!

This just makes me happy. The world is turning....

I'm so happy to hear this, Michael. Looks like you and your country will have a wonderful Christmas this year. Love wins again!