Hope in the Midst of Collapse 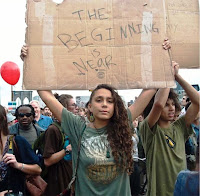 In a commentary published in Business Insider in the ebbing days of 2017, James Traub argued that the United States has become “decadent and depraved.” He explains what decadence means, and how it's tied to corruption. “Decadence is usually understood as an irreversible condition – the last stage before collapse,” he writes.

Today I share an excerpt from Traub's December 24, 2017 commentary, one that, as the new year begins, remains very much relevant and "of the day." . . . And yet I am not despondent. For as Ann Kreilkamp's photograph above and many of the links that follow this excerpt remind us, every end serves also as a beginning. And that's hopeful.

A democratic society becomes decadent when its politics, which is to say its fundamental means of adjudication, becomes morally and intellectually corrupt. But the loss of all regard for common ground is hardly limited to the political right, or for that matter to politics.

We need only think of the ever-unfolding narrative of Harvey Weinstein, which has introduced us not only to one monstrous individual but also to a whole world of well-educated, well-paid, highly regarded professionals who made a very comfortable living protecting that monster. “When you quickly settle, there is no need to get into all the facts,” as one of his lawyers delicately advised.

This is, of course, what lawyers do, just as accountants are paid to help companies move their profits into tax-free havens. What is new and distinctive, however, is the lack of apology or embarrassment, the sheer blitheness of the contempt for the public good.

When Teddy Roosevelt called the monopolists of his day “malefactors of great wealth,” the epithet stung – and stuck. Now the bankers and brokers and private equity barons who helped drive the nation’s economy into a ditch in 2008 react with outrage when they’re singled out for blame.

Being a “wealth creator” means never having to say you’re sorry. Enough voters accept this proposition that Donald Trump paid no political price for unapologetic greed.

The worship of the marketplace, and thus the elevation of selfishness to a public virtue, is a doctrine that we associate with the libertarian right. But it has coursed through the culture as a self-justifying ideology for rich people of all political persuasions – perhaps also for people who merely dream of becoming rich.

Decadence is usually understood as an irreversible condition – the last stage before collapse.

– James Traub
Excerpted from "The U.S. Has Reached
the Last Stage Before Collapse"
Business Insider
December 24, 2017

Related Off-site Links:
10 Good Things About a Terrible Year – Medea Benjamin (Common Dreams, December 25, 2017).
2018: Moving Beyond Trump – Rebuilding Our Civilizations from Source – Otto Scharmer (The Huffington Post, December 28, 2017).
Why Trump Phenomenon Signals an Oligarchy on the Brink of a Civilization-Threatening Collapse – Sally J. Goerner (Evonomics, April 29, 2016).
Golfing Into the Apocalypse, Which Is Happening Faster Than Anyone Anticipated – Abby Zimet (Common Dreams, December 28, 2017).
How Corporate Power Killed Democracy – Richard Moser (CounterPunch, December 6, 2017).
All of Trump's Problems Seem to Perpetually Come Down to Money – Charles P. Pierce (Esquire, January 4, 2018).
Daring to Dream in the Age of Trump – Naomi Klein (The Nation, June 13, 2017).
The End Is Near (or Is That the Beginning) – Neo(un)Orthodoxy (April 2, 2012).
Scores of Leading Economists Demand End to All Fossil Fuel Investments – Andrea Germanos (Common Dreams, December 8, 2017).
How Inequality Is Killing Off Humanity – Paul Buchheit (Common Dreams, January 8, 2018).
What We Want for 2018: The Biggest Movement Leaders Envision the Changes Ahead – Beverly Bell (Yes!, January 5, 2018).

See also the previous Wild Reed posts:
• The End of the World As We Know It . . . and the Beginning As We Live It
• See the World!
• As the Last Walls Dissolve . . . Everything is Possible
• Threshold Musings
• The War Racket
• Buffy Sainte-Marie's Medicine Songs
• Let Us Be "Energized by the Beauty That Is All Around Us": Jane Goodall's New Year Message

Labels: Quote of the Day, Resisting Corporatism and Fascism