Let Us Be "Energized by the Beauty That Is All Around Us": Jane Goodall's New Year Message 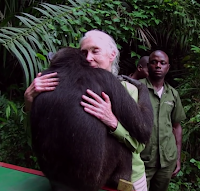 [F]or so many people around the world, 2017 brought hardship and suffering, because of the hurricanes, floods, droughts and fires due to climate change that have caused some to lose their homes, their possessions, even family and friends. And climate change has caused others to migrate from increasingly hostile environments. Then there are the hundreds of thousands of refugees fleeing violence, war and genocide. The horrifying number of people subjected to domestic violence. The poverty, the rising number of the homeless and the millions, including children, subjugated to modern day slavery. And we have inflicted unimaginable suffering also on billions of animals in factory farms, those subjected to wildlife trafficking, or to medical or pharmaceutical testing. And let us not forget the shocking destruction of the rainforests, the pollution of the ocean, the devastation caused by the unsustainable demand for the finite resources of Planet Earth, the clearing of land for development and for industrial farming with its chemical pesticides, herbicides, fungicides and fertilizers. The loss of biodiversity, the increasing number of animal and plant species listed as endangered. A daunting and depressing scenario indeed. The list is endless.

But as I was thinking about all of this, a little robin, with his cheerful red breast, flew onto the bird table outside my window. I could just see him in the bleak morning light. And before taking a beakful of food, he perched there singing his little heart out. An exquisitely enchanting matins that found its way into my soul. I realized then that he was delivering a message: reminding me that there is still so much in the world worth fighting for. So much that is beautiful, so many wonderful people working to reverse the harm, to help alleviate the suffering. And so many young people dedicated to making this a better world. All conspiring to inspire us and to give us hope that it is not too late to turn things around, if we all do our part.

With his bright, beady eyes shining in the light from my bedside lamp, the robin gazed at me through the glass before flying off. He had played his part, rekindled the hope that leads to action. Prepared me for the challenges that lie ahead.

So this is the message I share with you now in the hope that throughout 2018 we shall be energized by the beauty that is all around us, and rather than becoming discouraged and rendered helpless by the ignorance and evil that is so obvious, we shall become strengthened by the goodness and love that is also everywhere. And then we shall be able to use the gift of our lives, to make the world that little bit better – every day.

And, by the way, we must take time to make merry, to have fun – and to laugh!

See also the previous Wild Reed posts:
• A New Year (2017)
• Move Us, Loving God
• Andrew Harvey on Radical, Divine Passion in Action
• For 2015, Three "Generous Promises"
• Something We Dare Call Hope
• Buffy Sainte-Marie: "Sometimes You Have to Be Content to Plant Good Seeds and Be Patient"
• Called to the Field of Compassion
• Threshold Musings

Image: Writes Lori Dorn about this photograph: "In June of 2013, Dr. Jane Goodall and her team set out to release a chimpanzee named Wounda back into the wild. Wounda had spent a great deal of time at the Tchimpounga Chimpanzee Rehabilitation Center in the Republic of Congo being treated for a life threatening illness from which she had since recovered. Before heading out into the jungle, however Wounda doubled back to express her sincere appreciation to the entire team and give the iconic primatologist a truly grateful hug."

Labels: Environmental Issues, Quote of the Day, Signs and Wonders