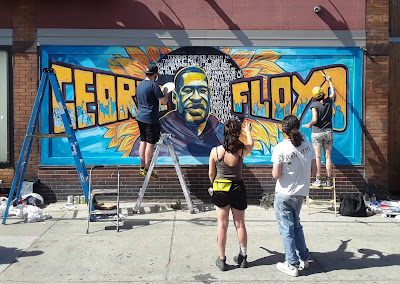 This afternoon after work, I drove to the intersection of Chicago Ave. and 38th St. in south Minneapolis to pay my respects to George Floyd, the 46-year-old African-American man who was murdered by the police at that location on Monday night.

An employee at the Cup Foods grocery store on Chicago Ave. had called the police after Floyd allegedly tried to pass a counterfeit $20 bill. A bystander captured the terrible scene of Floyd's subsequent death on his smartphone. The clip, posted later on Facebook, shows Floyd already on the ground, in handcuffs, and groaning under the weight of a white police officer's knees on his back and neck. Off camera, three other police officers stood nearby. All three chose to simply look on as Floyd struggled to breathe. 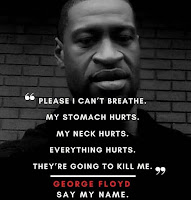 As Floyd says and struggles less, a gathered crowd pleads for the police officer, later identified as Derek Chauvin, to remove his knee from Floyd's neck. He refuses to do so. About three minutes into the 10-minute video recording, Floyd stops moving altogether. He was later pronounced dead at a nearby hospital.

For the last two nights there have been protests in Minneapolis in response to the killing of George Floyd. The four police officers involved have been fired and are being investigated, but no arrests have been made. Last night violence erupted around the Minneapolis Police 3rd Precinct, not far from my home, after police fired rubber bullets, stun grenades, and tear gas into a crowd of protesters. Later, some of those gathered set fire to several buildings and cars. In the ensuring chaos and destruction, one man was killed, innumerable windows were smashed, and looters descended upon a nearby Target store and Cub Foods store. Protests and incidences of looting have continued today across the Twin Cities.

In an effort to head-off further unrest this evening, Minnesota Governor Tim Walz has called out the National Guard, which is expected to supply personnel and equipment needed to “support emergency operations and response,” according to Walz’s order. Some, however, fear that a military presence will further inflame the situation.

As I left work earlier this afternoon, I considered visiting the site of last night's unrest and devastation but then decided to go instead to where George Floyd was killed. I wanted to somehow pay my respects; to bear witness to the terrible crime of his death. 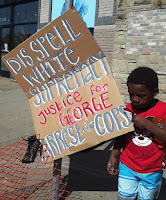 As you can see from the pictures that accompany this post, many people were gathered at Chicago and 38h. Indeed, there has been a permanent presence of people since Monday night, and the intersection has been closed off by those who have continued to gather there.

Although people are justifiably sad and angry, there is also a very respectful and somber atmosphere that shrouds the intersection. Flowers and cards and other creative expressions of love and remembrance cover the spot outside the Cup Foods deli where Floyd was murdered, and a table of refreshments is set up nearby for those who visit and opt to stand in the sun so as to listen to the steady stream of speeches and testimonies by local community leaders.

My photos are accompanied by a powerful piece written by MN Rep. Aisha Gomez (DFL, 62B). 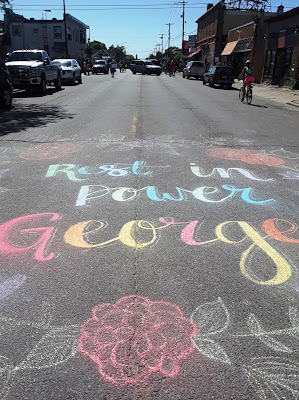 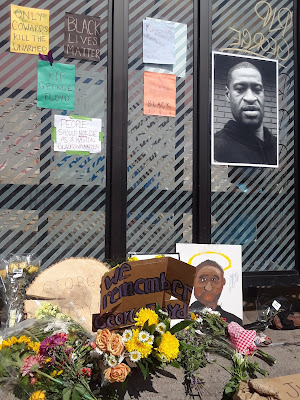 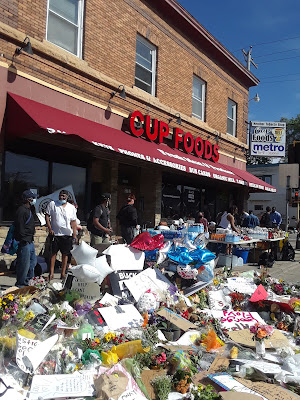 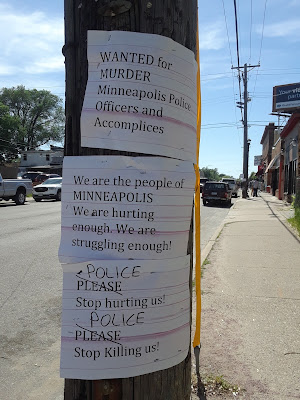 This is why we talk about police abolition.

The rot in police departments is the rot in our political and social systems, crystallized and heavily armed. It is a reflection of our country, built on the enslavement of African people and the genocide and dispossession of Native people, reliant on exploited immigrant labor to enforce the racialized social order and help the powerful accumulate wealth.

The police exist to uphold this social order, with deadly force when necessary. Like they did on 38th and Chicago last night, with a knee on George Floyd’s neck as he said he couldn’t breathe and begged for his life.

The origins of policing in the US are in slave patrols that hunted liberated enslaved people and quelled uprisings. There is no reform that can fix that.

When we talk about abolition or divesting from the police it’s not an aggressive or dreamy or unrealistic stance.

It is a dispassionate acknowledgement that our current policing system does what it was designed to do, to protect private property, uphold white supremacy, and terrorize Black and Brown people. It does not serve the interests of the people and it does not make our communities safe.

We have to reimagine and reorganize how and for whom we build safety in communities.

The police state was not constructed overnight and won’t be replaced overnight. We have to start by divesting from police budgets and stripping away functions that we don’t need people with guns to do and investing in anti-poverty efforts, public health-informed safety interventions, and critical mental health and addiction resources. We have to question the way policing has always functioned.

Why isn’t there a number we can call to dispatch an unarmed crisis team to respond to mental health or substance abuse related crises?

If we want the City to pay for distributing bikes and helmets to kids is the police department the best way to get that done?

If we want representatives of the City to walk around commercial districts and be a presence on the street do we need them to be armed?

We can and must intentionally walk away from a system of state violence that murders and terrorizes Black and Brown men to uphold white supremacy and capitalism.

We can and must orient ourselves to a world beyond policing as it is currently designed, where we build real safety for all members of our community, or we will stay caught in the same cycle of state sanctioned murder of Black men in the streets, outrage, and failed reform, on and on, that we’ve been in for decades.

Love and tenderness and protection to Mr. Floyd’s people, the beloved Black community in our city, and everyone hurting today. 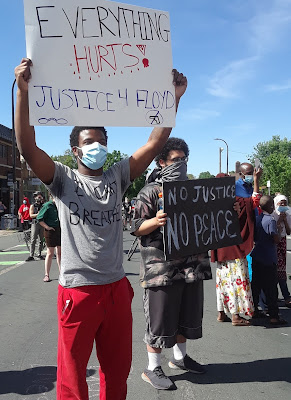 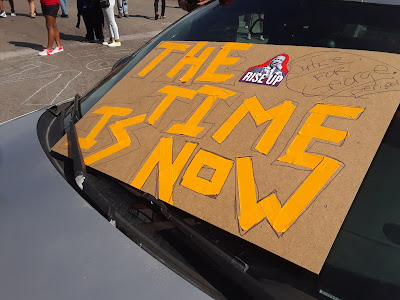 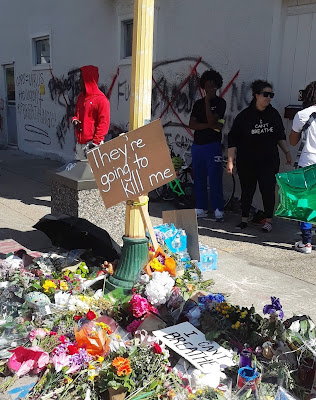 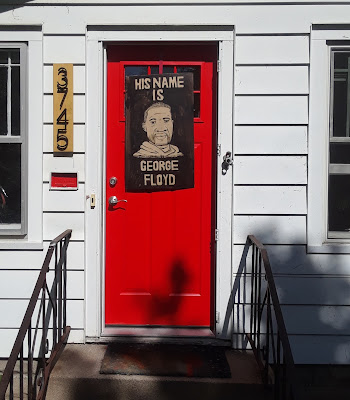 NEXT: “New and Very Dangerous”:
The Extreme Right-Wing Infiltration
of the George Floyd Protests 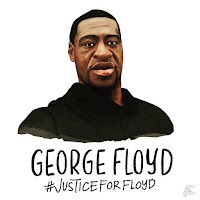 See also the previous Wild Reed posts:
• “I Can't Breathe”: The Murder of George Floyd
• Something to Think About – May 28, 2020
• Rallying in Solidarity with Eric Garner and Other Victims of Police Brutality
• In Minneapolis, Rallying in Solidarity with Black Lives in Baltimore
• “Say Her Name” Solidarity Action
• “We Are All One” – #Justice4Jamar and the 4th Precinct Occupation
• Quote of the Day – March 31, 2016
• “This Doesn't Happen to White People”
• Remembering Philando Castile and Demanding Abolition of the System That Targets and Kills People of Color
• Sweet Darkness
• Photo of the Day, 5/3/2015: “Black Is Sacred”
• “And Still We Rise!” – Mayday 2015
• “And Still We Rise!” – Mayday 2015 (Part II)
• Something to Think About – March 25, 2016

Photography: Michael J. Bayly. (Opening image is of a mural honoring George Floyd that's being created on the 38th St. side of Cup Foods. Three artists — Xena Goldman, Greta McLain, and Cadex Herrera — started the artwork around 7 a.m. this morning.)

Makes me wonder if this murder was a red-flag event to encourage mob violence that would be useful for Don Trump's re-election. However justified the anger and rage, the mob violence benefits only one person: Don Trump. We've seen this repeatedly over the last 55 years and the fruits of mob violence are consistent and bad for poor people.

Again your roundups are nothing short of thorough and amazing. This blog deserves more views!