Mayor Melvin Carter: “The Anger Is Real, and I Share It With You” 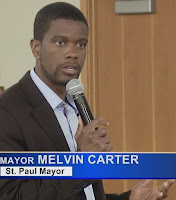 Yesterday morning, Mayor Melvin Carter III of Saint Paul delivered an impassioned and inspiring speech at a press conference hosted by Minnesota Governor Tim Walz. The press conference was held in response to the ongoing protests and social unrest in Minneapolis and Saint Paul following the May 25 killing of George Floyd by a Minneapolis police officer.

Yesterday, we asked a big thing of our residents. We asked you to stay home. We asked you to clear the streets to give our police officers and law enforcement professionals the opportunity to reclaim a sense of peace, a sense of calm, a sense of order in our community. At the heart of that request was an invitation. It was an invitation for us to take the anger, to take the grief, to take the trauma, and even the rage that we’ve all experienced over the past week, and decide how we would channel it.

[. . .] We know that right now is a moment of deep soul searching for our community, and for our nation. Right now, we ought to be focused on the fact that George Floyd should still be alive today. We ought to be focused on the fact that when someone takes one of our lives in such dramatic and gruesome fashion, especially when it’s as well-documented as George Floyd’s murder was, that we ought to have some ability to be confident, to be sure that the people responsible, not just one, but the four people responsible for his death will of course be held to account in a democracy as great as ours.

We’ve had a lot of conversations about whether [those inciting acts of violence and property destruction] are insiders or outsiders, whether they’re from in town or out of town. The one thing that’s absolutely clear to me is those folks who would seek to act in a way that during a pandemic would deprive our senior citizens of the local pharmacy they need to go to, to get their life-saving medicine; who in the midst of a food shortage would deprive our families of the grocery stores they need to go to, to feed their children; who would deprive in the middle of one of the greatest economic crises in our country’s history our workers from the opportunity to go to work, and to earn a living, and to build, and to go and participate in our economy. The one thing that is clear to me is those folks [and] those actions are not driven by a sense of deep drive for the betterment of our community.

I also want to acknowledge, as I have before, that that doesn’t mean there’s not real rage, that doesn’t mean there’s not real anger, and that doesn’t mean that our residents are happy with what happened. We’re not. I don’t know a single police officer, I don’t know a single CEO, I don’t know a single lawyer, accountant, neighbor, or community activist who’s happy with what happened, who’s accepting what happened. George Floyd’s killing is unacceptable, and it’s disturbing by itself. In combination with all of the other people, African American people, African American men, who’ve lost their lives unarmed, unaggressive, not just over the past decade as camera phones have become the norm, but over the past decades, and generations, and centuries in our country. That anger is real, and I share it with you.

Today we’re asking our community for peace, but I want to be very clear. We are not asking you for patience, and we are not asking you for pacifism. This is not a time for either of those things. I am not asking you to sit to the side and patiently wait while we slowly and incrementally stem the bloody tide of African American men killed by law enforcement. We’re asking you to take that energy, that energy which has consumed our country, that energy which is a nuclear energy that could either destroy us or bring us together and build us up in a way that we have never been together before as a country. We’re asking you to take that energy and use it not to destroy our neighborhoods, but to destroy the historic culture, to destroy the systemic racism, to destroy in specific where this is concerned the laws, the legal precedents, the police union contracts, all of the things that make it so difficult to hold someone accountable when a life like George Floyd’s is so wrongfully taken.

We’re asking you to channel that energy in a way that builds us, in a way that makes us better, in a way that brings us together. And to every single person who’s frustrated, who’s sad, who’s angry, who’s devastated, who wants the world to know that this can never happen again, I say that we’re with you. I thank our law enforcement professionals for serving us so valiantly, our firefighters for serving us so valiantly over the course of a devastating week, working in challenging conditions, sometimes with bottles, sometimes with rocks hurled at them. I know that they have to stand as a part of this work with us as we build this stronger pact, this stronger social compact, and this better future together. Thank you.

To read the transcript of Mayor Carter's speech in its entirety, click here.

NEXT: He Called Mama.
He Has Called Up Great Power 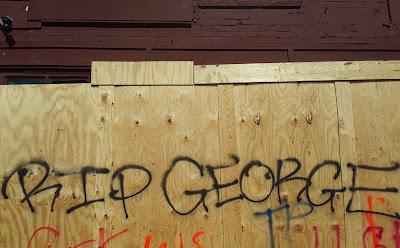 See also the previous Wild Reed posts:
• “I Can't Breathe”: The Murder of George Floyd
• Something to Think About – May 28, 2020
• Honoring George Floyd
“New and Very Dangerous”: The Extreme Right-Wing Infiltration of the George Floyd Protests
• Trevor Noah on the “Dominoes of Racial Injustice”
• Rallying in Solidarity with Eric Garner and Other Victims of Police Brutality
• In Minneapolis, Rallying in Solidarity with Black Lives in Baltimore
• “Say Her Name” Solidarity Action
• “We Are All One” – #Justice4Jamar and the 4th Precinct Occupation
• Quote of the Day – March 31, 2016
• “This Doesn't Happen to White People”
• Remembering Philando Castile and Demanding Abolition of the System That Targets and Kills People of Color
• Sweet Darkness
• Photo of the Day, 5/3/2015: “Black Is Sacred”
• “And Still We Rise!” – Mayday 2015
• “And Still We Rise!” – Mayday 2015 (Part II)
• Something to Think About – March 25, 2016