Emma Jordan-Simpson: “There Will Be No Peace Without Justice” 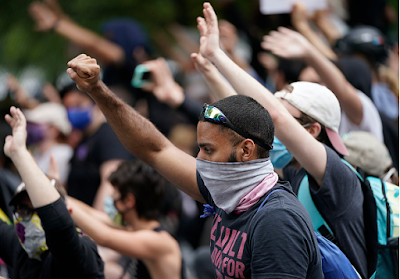 .
As you may know, I live in south Minneapolis, just blocks from the epicenter of the uprising against police brutality and systemic racism that began in response to the May 25 killing by police of George Floyd. 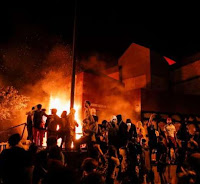 I've shared photos and commentary on this uprising (see, for example here and here) but lately I've had to step back and tend to my heart in the midst of all that's happening and the speed at which it's happening. In just a few days the uprising that began with the burning of the Minneapolis Police 3rd Precinct on the night of May 28 (right) has gone global, and the reaction to it by authorities here in the U.S. has often been shocking in its level of violence.

The Rev. Dr. Emma Jordan-Simpson, Executive Director of Fellowship of Reconciliation USA, recently penned an article entitled "Honoring the Righteous Rage, Agony and Despair of This Global Uprising." It's an article that provides an excellent summary and analysis of events in the week following the death of George Floyd. I share it in its entirety below.

Honoring the Righteous Rage, Agony
and Despair of This Global Uprising 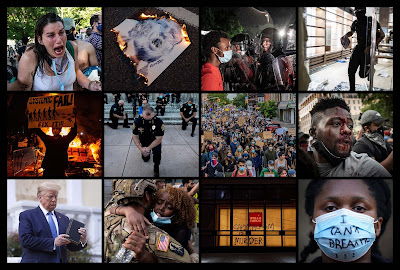 Following the senseless killings of George Floyd and so many other Black civilians, we need fundamental policy changes focused on reparative justice and healing.

The Fellowship of Reconciliation honors the righteous rage, agony, and despair that has fueled a renewed global uprising against the powers and principalities of racist policing and punishment in recent days. This rebellion, rooted in a deep desire for justice and respect for the inherent human dignity of all persons, has been treated with contempt and fury by the White House. Indeed, rather than seeking to repair and unite, the office of the president has emboldened and escalated repressive policing and poured salt on the festering wound of systemic, institutional violence and racism.

On June 1, 2020 – in the midst of a pandemic that has left over 100,000 people dead in the United States, and while protests gripped much of the country over the unjust killings of George Floyd, Breonna Taylor, Tony McDade, Desmond Franklin, Ahmaud Arbery and other Black civilians throughout the nation in recent weeks – the president of the United States effectively forewarned martial law by threatening from the Rose Garden to deploy U.S. military forces in local communities nationwide.

He then walked across Lafayette Square, opposite the White House, which had been viciously cleared of peaceful protestors by the use of rubber bullets, flash bang grenades, and tear gas, to the historic St. John’s Episcopal Church for a photo op in which he held up a Bible, like a prop in an absurdist drama of his own making. For an administration well-practiced in the arts of disinformation and dog-whistles intended to inflame its political base, President Trump’s photo op was a sickening new low that further demeaned the office he has spent nearly four years degrading and debasing.

The fact that as tens of thousands of Americans were dying from COVID-19 Mr. Trump resisted invoking special powers to save lives, but was swift in committing federal troops to the militaristic occupation and policing of cities to protect property, isn’t ironic, it is soul-crushing and tragically true to form. This is an administration that has shown no interest in healing wounds and fostering unity among people; it is abundantly clear that its default posture is instead to fan the flames of hate and division for political gain.

As an international, interfaith organization, the Fellowship of Reconciliation has worked for over a century to promote peace and justice among people. Our membership includes Baha’is, Buddhists, Christians, Hindus, Jews, Muslims, and other faith practitioners, as well as those without institutional or religious affiliation. For the president to hold up a sacred text in front of a house of worship while ordering a brutal crackdown on democratic, peaceful protestors is an affront to every religious, moral, and human value we hold. Who is this God he wishes to invoke? It clearly is not the God of justice, peace, and love revealed to humans over millennia.

In the words of the Right Rev. Mariann E. Budde, Episcopal bishop of Washington, whose diocese includes St. John’s parish: “He did not pray. He did not mention George Floyd, he did not mention the agony of people who have been subjected to this kind of horrific expression of racism and white supremacy for hundreds of years.”

The systemic inequities baked into America’s social and economic life will continue to lead to violence and death if unabated. We call for fundamental policy changes focused on reparative justice and healing, such as defunding policing, deconstructing our carceral state, and demilitarizing our federal budget. This fed-uprising must be a wake up call to Americans. There will be no peace without justice. There will be no reconciliation without truth and repentance.

“Why So Many Police Are Handling the Protests Wrong” (June 1, The Marshall Project)


The Rev. Dr. Emma Jordan-Simpson is the Executive Director of FOR USA, President of the Board of American Baptist Churches-Metro NY, and a member of the pastoral staff at The Concord Baptist Church of Christ in Brooklyn, NY.

See also the previous Wild Reed posts:
• “I Can't Breathe”: The Murder of George Floyd
• He Called Mama. He Has Called Up Great Power
• Something to Think About – May 28, 2020
• Honoring George Floyd
• “New and Very Dangerous”: The Extreme Right-Wing Infiltration of the George Floyd Protests
• Mayor Melvin Carter: “The Anger Is Real, and I Share It With You”
• Marianne Williamson: Quote of the Day – June 2, 2020
• Trevor Noah on the “Dominoes of Racial Injustice”
• Rallying in Solidarity with Eric Garner and Other Victims of Police Brutality
• In Minneapolis, Rallying in Solidarity with Black Lives in Baltimore
• “Say Her Name” Solidarity Action
• “We Are All One” – #Justice4Jamar and the 4th Precinct Occupation
• Nancy A. Heitzeg: Quote of the Day – March 31, 2016
• “This Doesn't Happen to White People”
• Remembering Philando Castile and Demanding Abolition of the System That Targets and Kills People of Color
• Sweet Darkness
• Photo of the Day, 5/3/2015: “Black Is Sacred”
• “And Still We Rise!” – Mayday 2015 (Part I)
• “And Still We Rise!” – Mayday 2015 (Part II)
• Something to Think About – March 25, 2016