On the 100th Anniversary of Their Horrific Murder, Remembering Elmer Jackson, Elias Clayton, and Isaac McGhie 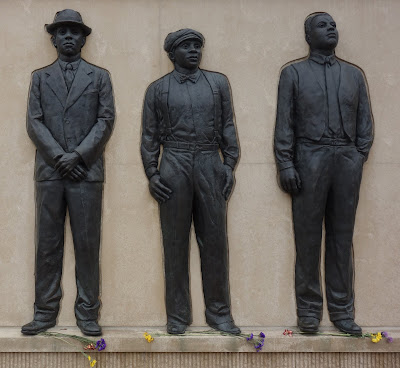 Notes Wikipedia about this heinous event and its aftermath:

On June 15, 1920, three African-American circus workers, Elias Clayton, Elmer Jackson, and Isaac McGhie, suspects in an assault case, were taken from jail and lynched by a white mob of thousands in Duluth, Minnesota. Rumors had circulated that six African Americans had raped and robbed a nineteen-year-old woman. A physician's examination of her subsequently found no physical evidence of rape. 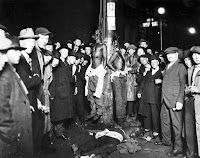 Right: A postcard of the lynching of Elias Clayton, Elmer Jackson, and Isaac McGhie. Lynching postcards were in widespread production for more than fifty years in the United States. Often inscribed with racist text or poems, these postcards were intended to be distributed so as to intimidate blacks and/or be collected and kept as a souvenir by whites. Although their distribution through the United States mail was banned in 1908, some white supremacists still distribute them today. 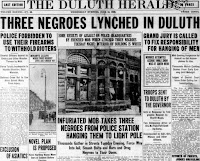 [At the time of the lynchings] prominent blacks in Duluth complained that the city had not protected the circus workers. The mayor, commissioner of public safety and police chief were criticized for their failures to break up the mob before it had gotten so powerful. A special grand jury was called to investigate the lynchings. It said that the Duluth commissioner of public safety, William F. Murnian, was "not competent" and the police department was in need of a "thorough overhauling."

Two days after the lynchings, on June 17, Judge William Cant and the grand jury had a difficult time identifying the lead mob members. In the end the grand jury issued thirty-seven indictments for the lynching mob. Twenty-five were for rioting and twelve for the crime of murder in the first degree. Some men were indicted on both charges. Three men: Louis Dondino, Carl Hammerberg, and Gilbert Stephenson were convicted of rioting; none served more than 15 months in prison. No one was prosecuted for the murders of the three black men.

Prosecution continued against the other black circus workers. Despite the lack of significant physical evidence, seven men were indicted for rape. The NAACP had protested to the city about the lynchings. It hired defense attorneys for the men, and charges were dismissed for five. Max Mason and William Miller were tried for rape. Miller was acquitted, but Mason was convicted and sentenced to serve seven to thirty years in prison. He was a native of Decatur, Georgia, who had been traveling with the circus as a worker. He appealed his case without success. He was incarcerated at Stillwater State Prison, serving four years, from 1921 to 1925. He was released on the condition that he would leave the state. On June 12, 2020, three days before the 100th anniversary of the lynchings, Max Mason was granted the first posthumous pardon in the history of the state of Minnesota.

In the late twentieth century, journalist Michael Fedo wrote The Lynchings in Duluth (1970), which began to raise awareness of the event. Community members from many different groups began to come together for reflection and education. Elmer, Elias and Isacc's unmarked graves were located and in 1991, gravestones were erected with funding from a local church. Vigils began to be held at the intersection where the men were lynched. In 2000, a grassroots committee was formed, and began to offer speakers to groups and schools. At around the same time it was decided to commemorate the event with a memorial. The Clayton Jackson McGhie Memorial, which includes a corner wall and plaza, was dedicated in 2003. It includes three 7-foot (2.1 m)-tall bronze statues of the three men. The CJMM Committee continues to work for racial justice through educational outreach, community forums, and scholarships for youth.

Irene Tusken's great nephew, as of 2020, is the chief of the Duluth Police Department. 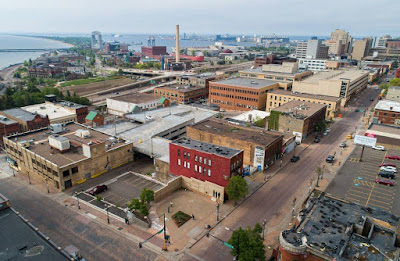 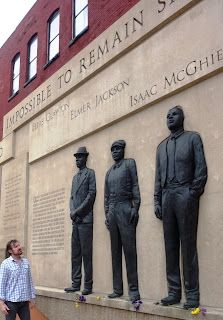 On June 17, 2017, when returning to Minneapolis from a visit to Grand Marais, my friend Kathleen and I stopped in Duluth and visited the memorial to Elias Clayton, Elmer Jackson, and Isaac McGhie.

Designed and sculpted by Carla J. Stetson, in collaboration with editor and writer Anthony Peyton Porter, this memorial comprises a plaza and bronze statues of the three men who were killed. Situated across the street from the site of the lynchings, the Clayton Jackson McGhie Memorial was dedicated on October 10, 2003.

At the memorial's opening, thousands of citizens of Duluth and surrounding communities gathered for a ceremony. The final speaker at the ceremony was Warren Read, the great-grandson of one of the most prominent leaders of the lynch mob. Here is part of what he shared:

It was a long held family secret, and its deeply buried shame was brought to the surface and unraveled. We will never know the destinies and legacies these men would have chosen for themselves if they had been allowed to make that choice. But I know this: their existence, however brief and cruelly interrupted, is forever woven into the fabric of my own life. My son will continue to be raised in an environment of tolerance, understanding and humility, now with even more pertinence than before.

Read has written a memoir exploring his learning about his great-grandfather's role in the lynching, as well his decision to find and connect with the descendants of Elmer Jackson, one of the men killed. Read's book, The Lyncher in Me: A Search for Redemption in the Face of History, was published in March 2008. 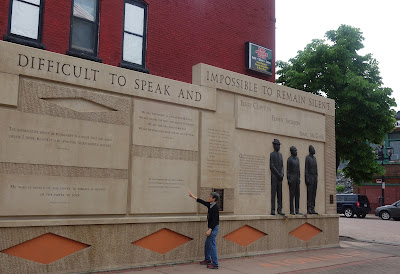 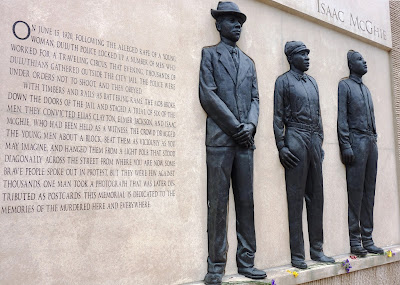 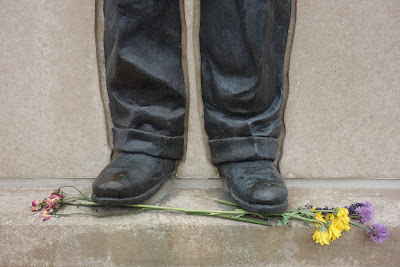 Following is a 12-minute documentary produced by TPT about the Duluth lynching and its aftermath.

See also the previous Wild Reed posts:
• “I Can't Breathe”: The Murder of George Floyd
• He Called Mama. He Has Called Up Great Power
• Something to Think About – May 28, 2020
• Honoring George Floyd
• “New and Very Dangerous”: The Extreme Right-Wing Infiltration of the George Floyd Protests
• Mayor Melvin Carter: “The Anger Is Real, and I Share It With You”
• “An Abolitionist Demand”: Progressive Perspectives on Transforming Policing in the U.S.
• Marianne Williamson: Quote of the Day – June 2, 2020
• Trevor Noah on the “Dominoes of Racial Injustice”
• Emma Jordan-Simpson: “There Will Be No Peace Without Justice”
• Keeanga-Yamahtta Taylor: Quote of the Day – June 9, 2020
• Rallying in Solidarity with Eric Garner and Other Victims of Police Brutality
• In Minneapolis, Rallying in Solidarity with Black Lives in Baltimore
• “Say Her Name” Solidarity Action
• “We Are All One” – #Justice4Jamar and the 4th Precinct Occupation
• Nancy A. Heitzeg: Quote of the Day – March 31, 2016
• “This Doesn't Happen to White People”
• Remembering Philando Castile and Demanding Abolition of the System That Targets and Kills People of Color
• Sweet Darkness
• Photo of the Day, 5/3/2015: “Black Is Sacred”
• “And Still We Rise!” – Mayday 2015 (Part I)
• “And Still We Rise!” – Mayday 2015 (Part II)
• Something to Think About – March 25, 2016