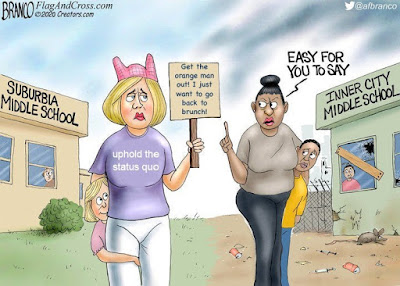 Regardless of who wins the U.S. presidential election today,
the real task remains: Repairing the moral compass of American politics.

David Sirota and Andrew Perez have an excellent piece over at Jacobin in which they critique centrist Democrats like Barack Obama for suggesting that if Joe Biden wins today’s presidential election, we can, in Sirota and Perez’s words, all basically tune-out of politics and “go back to brunch.” 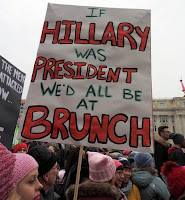 This brunch expression had its first iteration on protest signs shortly after the election of Donald Trump: “If Hillary was president we’d all be at brunch.” More recently, this line of thinking has had a resurgence — but now in support of Joe Biden against Trump.

The idea is that once a Democratic president is in office, everyone can disengage and demobilize, because the government is being run by Josh Lyman, Sam Seaborn, Leo McGarry, and President Bartlet, who always have our best interests at heart and can fix everything on their own, in one succinct television episode.

Of course, it is absolutely true that what sets Trump apart from other presidents is his desire to incite, inflame, and sow anxiety in the American psyche – and Obama is certainly correct in suggesting that Trump’s psychological assault must end.

However, Obama’s [recent speech in Flint, Michigan] went further. Echoing a previous refrain from Democratic Sen. Michael Bennet, it was a call to resurrect Brunch Liberalism whereby large swaths of the American left disengage and defer in much the same way it did during the Obama administration, to disastrous effect.

Though it is now forgotten history, the history is clear: After years of mass protest and activism against the George W. Bush administration, many liberal activists, voters, and advocacy groups went to brunch after the 2008 election, fell in line and refused to pressure the new administration to do much of anything. Those that dared to speak out were often berated and shamed.

In touting a presidency we don’t have to think much about, Obama conjures the notion of a Democratic administration once again insulated from pressure from an electorate whose poorer populations are too busy trying to survive, and whose affluent liberals are thrilled to be back at Sunday morning brunch after watching an MSNBC host reassure them that everything is All Good. 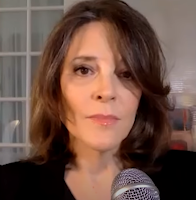 Sirota and Perez’s article reminds me of a recent interview that entrepreneur Andrew Yang did with author and activist Marianne Williamson (left). Both Yang and Williamson are former 2020 Democratic presidential candidates.

In this interview, Williamson, like Sirota and Perez, calls out the “delusion” that “if we just vote Blue, it will all be fixed.” In doing so, she also critiques the Democratic establishment, an establishment which, as Obama demonstrates, wants people to look forward to returning to a pre-Trump “normal” instead of recognizing that this “normal” helped pave the way for Trump and that the majority of Americans actually want progressive policies that go way beyond what the Democratic establishment is prepared to talk about, let alone embrace.

As Marianne points out, the corporate Democratic machinery purges progressive voices. This is “the wrong call” for the party, she says. Why? Because it’s a call that signifies entrenchment in an amoral economic (and thus political) system that has turned short-term profits for huge multinational corporations into a false god. And as Marianne noted in last year’s second Democratic presidential debate (in which she was the most Googled candidate), “this new false god takes precedence over the safety and the health and the well-being of we the American people and the people of the world and the planet on which we live.” Progressive voices challenge this false god. Yet as we’ve seen again and again, such voices are routinely minimalized, unsupported, and/or banished from the Democratic party, primarily because the party leadership is beholden to its corporate donors and their “consultants” over and above all else. Marianne accurately names this as a type of corruption.

As I talk about it in more detail here, both political parties in the United States are entrenched to varying degrees in this amoral economic system, the result being a broken democracy and a societal moral compass in need of repair. That’s what has to change. That’s the work before us, regardless of who wins today.

Now, all that being said, I definitely think this work is more likely to get traction under a Biden administration than a Trump administration. That's why I join with many other progressives, including the four progressive former presidential candidates (Williamson, Yang, Elizabeth Warren, and Bernie Sanders) in urging people to vote for Joe Biden.

So, yes, we have to resoundingly defeat Trump. But we also have to bring about a fundamental course correction of the political and economic system of the United States so that in four or eight years time we’re not contending with the rise of another authoritarian populist (perhaps even Donald Trump Jr.). This means challenging and transforming the centrist, neoliberal agenda of the Democratic establisment and resisting any temptation to “go back to normal.” It means forging instead a way predicated on repairing our broken democracy and re-setting our moral compass as a nation. Only then will our political system become truly of the people, by the people, and for the people.

See also the previous Wild Reed posts:
• Election Eve Thoughts
• Eight Leading Progressive Voices on Why They're Voting for Biden
• Chadwick Boseman’s Timeless Message to Young Voters: “You Can Turn Our Nation Around”
• Heather Cox Richardson on the Unravelling of President Trump
• Deep Gratitude
• My Summer of Supporting Progressive Down-Ballot Candidates
• Progressive Perspectives on the Biden-Harris Ticket
• Progressives and Obama