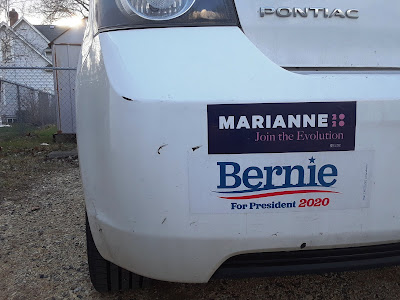 This evening I’m choosing to actively cultivate and share my deep gratitude for the two Democratic presidential candidates who, in my view, most resolutely and authentically embodied and championed the democratic ideals and humanitarian values at the core of the “American experiment.” In each of their own unique ways, Sen. Bernie Sanders and author Marianne Williamson called for the same thing: deep (i.e., radical) systemic change; a course correction to this country’s political/economic system, a system that for the last 40 years has placed maximization of short-term profits for transnational corporations over the needs of people and concern for the environment. 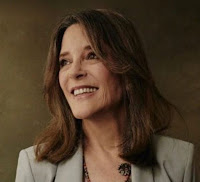 During the course of her year-long campaign (one which she suspended in January), Marianne Williamson never wavered in changing the conversation from symptoms to root causes in a way that the political media establishment routinely avoids. She also talked about the need to fundamentally disrupt the political and economic status quo and to initiate a “season of moral repair.” Her “politics of love” was informed by both her love for democracy and her decades-long work with and for people in crisis, especially spiritual or meaning-making crisis. 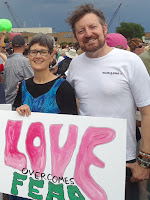 Through her presence, words, and actions on the campaign trail, Marianne not only advanced a genuinely progressive political agenda to address the cause of this traumatizing despair, but also embodied the shift in consciousness that many believe the Sacred is calling all of humanity to manifest in and through both individual and communal actions. It's a shift that invites all to consciously choose love over and above fear. Marianne Williamson continues to remind us that when such a choice is realized in our politics as well as in our individual lives, we are bringing to birth an era of justice, peace, and healing to our world and our lives. 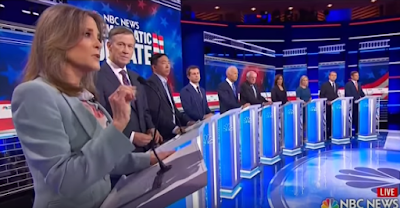 Above: Marianne Williamson participating in the first Democratic presidential debate in Miami, Florida on June 27, 2019. (For commentary and analysis of her participation in the second debate, click here.) 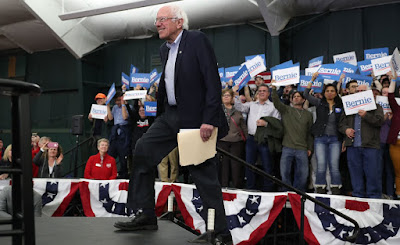 Above: Sen. Bernie Sanders at a campaign event earlier this year. I saw Sanders speak at a "Get Out the Vote" rally in St. Paul, Minnesota, on March 2, 2020. (For commentary and images of this event, click here.) 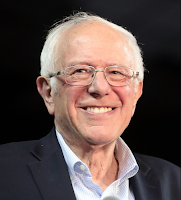 For his part, Bernie Sanders has spent a lifetime championing working people over corporate greed. For decades, Bernie has embodied what the U.S. (and the world) needs most: an elected leader refreshingly unbeholden to corporate interests and committed to justice for all. Bernie is the complete opposite of the tepid, bought-and-sold, politically regressive Wall St. Democrats, the party’s neoliberal “centrists” who rose in prominence and influence during the Clinton years and, sadly, continue to define the Democratic establishment. Yet thanks to Bernie’s tireless efforts over the years, issues and policies that were once viewed as “extreme” (such as Medicare for All, a $15 minimum wage, and the Green New Deal) are now solidly part of the “mainstream,” with many of them already being implemented in some form or another in cities and states across the country. 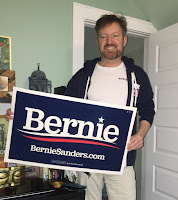 With a Bernie Sanders candidacy we had, in the words of John Atcheson, “a chance to rewrite history . . . to restore government to a role in which it assures an equitable economy and society; a role that isn’t one of a scapegoat, a punch line, or a tool of the Oligarchy; a role where once again, government is the vehicle we use to accomplish great things together.” My hope is that the unprecedented movement that Bernie inspired will continue to keep this “chance” for genuine hope and change alive, though in new ways now that Bernie has announced today the suspension of his presidential bid.

So now both Marianne and Bernie are out of the race. I’m sad, of course, but prefer to focus on and lift up the immense gratitude I feel for both of these inspiring figures, and the thankfulness I harbor in my heart in knowing that what they stand for lives on and will continue to influence and shape the political landscape in the lead-up to November.

See also:
• Hope, History, and Bernie Sanders
• Carrying It On
• Marianne Williamson: In the Midst of This “Heartbreaking” Pandemic, It's Okay to Be Heartbroken
• Moderates, Radicals, and MLK
• In the Garden of Spirituality – Marianne Williamson