The Problem Is Ultimately Bigger Than Individuals. It’s Systemic 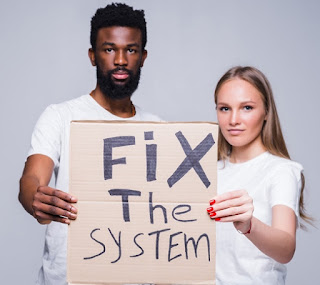 In Minneapolis yesterday, attorneys delivered opening statements in Derek Chauvin’s trial. The former Minneapolis police officer is accused of murder and manslaughter in the killing of George Floyd.

Floyd’s killing occurred last May, not that far from my home in south Minneapolis. It sparked a global uprising against systemic racial injustice and police brutality. The epicenter of that uprising was the Twin Cities of Minneapolis and St. Paul.

When talking about the trial that starts today, I sometimes catch myself about to the say “the George Floyd trial.” Perhaps you find yourself about to say that too. Maybe you are saying it. Yet it’s not George Floyd who is on trial; it’s Derek Chauvin. It is the Derek Chauvin trial we’ll be watching and following in the days and weeks to come.

I hope and pray that justice will be served, and that Floyd’s death and Chauvin’s trial will motivate individuals, communities, and institutions to confront and transform any and all forms of entrenched structural racism and white supremacy.

Until that happens, black lives won’t matter in our society. And if you’re an advocate for the phrase “All Lives Matter” . . . well, all lives can only matter when black lives matter.

Recently my friend Antipas in Australia challenged something I posted on Facebook about the disproportionate number of Black people killed by police in the U.S. by saying, “Blacks killed by Blacks are way too many and refutes the leftist narrative.” When I asked my friend what exactly this “leftist narrative” is, he replied, “That whites are the bad guys.” Following is my response.

What’s “bad,” Antipas, is not so much individuals but social structures. To really get to the root of the problems and tensions we’re talking about and to start resolving them, we need to go deeper than the level of the individual. We need to talk about systems – the economic system, the political system, the criminal justice system, the banking system. Here in the U.S., all these systems have their roots in racist ideology, including white supremacist ideology.

After all, this country was “discovered” and “tamed” by Europeans who believed in the Doctrine of Discovery, a profoundly racist theological way of thinking that saw non-whites as sub-human. This country’'s twin original sins were the genocide of Native Americans and the enslavement of Africans. Moving into more modern times, the economic and social disparity that existed at the end of the Civil War between whites and blacks has never been adequately addressed, and so continues to this day. (This disparity produces hopelessness and despair, and often contributes to the high levels of drug abuse, crime, and black-on-black murder in some inner-city Black communities that you referenced, Antipas. It doesn’t excuse it, of course, but it does go a long way in explaining it.)

The economic and social disparity that can be traced back to the end of the Civil War is perpetuated today by racist policies and practices that are all deeply embedded in the above mentioned systems. I’m referring to things like “redlining” practices in banking; suppression of Black voters by Republicans; environmental and zoning policies that see toxic waste dumped and noise pollution allowed in or near communities of color but rarely white communities and never wealthy white communities; urban planning policies that historically have seen freeway construction purposely planned to carve through communities of color, often completely destroying them; policing policies and practices that have their roots in the ideology of white supremacy as expressed in the 1850 Fugitive Slave Act; and a criminal justice system that disproportionately kills and incarcerates people of color.

So I hope you can see that what we’re dealing with is, first and foremost, a systemic problem, not a problem of “bad” individuals. And you certainly can’t – and the “leftists” I know certainly don’t – label people “good” or “bad” depending on their color. After all, many white individuals are working to reform or dismantle these deeply racist systems, while some Black people unquestioningly live and work within these systems and even (either consciously or unconsciously) seek to perpetuate them. (I’m thinking of Black right-wingers like Ben Carson and Candace Owens.) It’s way more complex, my friend, than people on the left simply thinking that “whites are the bad guys.”

I conclude with Charity Croft’s response to conservative political commentator Candace Owens, who, in one of her videos last year, stressed that George Floyd was a “criminal” who does not deserve to be depicted as a “martyr” or be “supported” in any way.

See also the previous Wild Reed posts:
• “I Can’t Breathe”: The Murder of George Floyd
• He Called Mama. He Has Called Up Great Power
• Honoring George Floyd
• “New and Very Dangerous”: The Extreme Right-Wing Infiltration of the George Floyd Protests
• Emma Jordan-Simpson: “There Will Be No Peace Without Justice”
• The Language of the Oppressor
• Something to Think About – July 26, 2020
• Out and About – Spring 2020