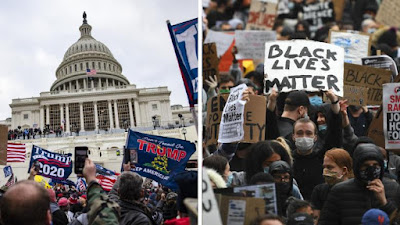 I wrote the following back in January in response to a Facebook contact, Charles, who superficially compared and contrasted aspects of the January 6, 2021 storming of the U.S. Capitol by Trump supporters with last summer’s nationwide protests against systemic racial injustice and police brutality sparked by the May 25, 2020 police killing of George Floyd. In making these comparisons, Charles concluded that the greater level of “outrage” being expressed by the media to the Capitol attack then to the protests was hypocritical given that the “left-wing violence” of the protesters lasted longer and caused more destruction, death, and injury than the “right-wing violence” at the Capitol.

We need to go deeper than surface appearances, Charles. And when we do, we discover that there is a world of difference between what triggered the events of the summer and what transpired at the U.S. Capitol. There is also a world of difference between what these events mean in relation to humanity’s ongoing efforts to build a world where all are safe and treated with dignity, respect, and fairness. But to go deeper and discern these differences would challenge and dismantle the bullshit narrative that the two events and their backgrounds can be unquestionably comparable, that examining them is simply a matter of comparing and checking-off stats about each of them. At a deeper level there is so much more going on.

Last summer’s uprising here in the U.S. was the epicenter of a global protest against systemic racial injustice and police brutality. It was triggered by the police killing of George Floyd. Some took advantage of this protest for their own purposes and mindlessly destroyed property and looted. You can both denounce that and support the real purpose of the uprising. In other cases, including here in Minneapolis, the protests were infiltrated by white supremacists who incited violence and destruction (particularly of small, Black-owned businesses) so as to discredit the movement and seek to undermine diverse inner-city communities. They ultimately failed. This isn't my opinion, it's a documented fact. (See here and here.)

Acknowledgement of all of this doesn’t excuse the wanton violence and destruction but it clearly can, as you demonstrate, blind people to the deeper reality of systemic (or structural) racial injustice. Those protesting accept that this deeper reality is an actual reality. After all, many of them painfully experience it on a daily basis. But they also object to this reality, and seek to transform it. It was both this objection and longing for transformation that compelled them to take to the streets to march and protest. These marches and protests, it should be noted, were overwhelmingly peaceful.

Compare all of this to the insurrection at the Capitol on January 6. It was not in any way a response to an injustice. It was an insurrection; an attempted coup by far-right extremists upset that their privileged, white-supremacist worldview is being eroded away, most recently by the defeat of their racist and fascist hero in the 2020 election. That’s what triggered it: Trump’s defeat and his false claim that the election had been stolen from him. This white supremacism and authoritarianism comprise the deeper reality of the Capitol insurrection, one that’s connected to and accounts for the deeper reality of racism and injustice that groups like Black Lives Matter and so many other concerned Americans recognize, object to, and protest against. Yet the deeper reality of racial injustice is rejected by the Capitol insurrectionists. Instead, they support the lies, the unreality, being peddled by their cult’s leader. And it was this support that compelled them to storm the U.S. Capitol, America’s “temple of democracy.” There was absolutely nothing peaceful about this assault on the nation’s Capitol and the people’s representatives within it.

Charles, your superficial comparisons totally ignore all of this. They not only fail to go deeper but imply there is nothing deeper to go to, let alone examine. Your comparisons stay merely with the surface view of violence and destruction. Sure, go ahead and denounce such things. But remember that they are the surface signs and symptoms of much deeper, inter-connected realities, namely the efforts by some to maintain white supremacy and the efforts by many more to dismantle the historic legacy of white supremacy: systemic racism and injustice. Awareness of such deeper realities should call us to make distinctions between – and be discerning about – what we see on the surface. 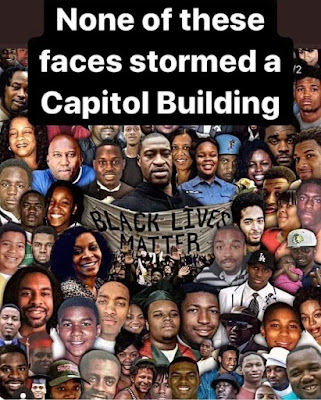 Above: The faces of just some of the many Black people killed by police (or who died under suspicious circumstances while in police custody) in the U.S. Those pictured include Trayvon Martin, Michael Brown, Eric Garner, Freddie Gray, Sandra Bland, Jamar Clark, Philando Castile, Stephon Clark, and George Floyd. As is noted here, in 2019 “more than 1,000 people were killed by police, according to Mapping Police Violence, one research group. Black people were disproportionately among those killed, the group found. Black people accounted for 24% of those killed, despite making up only about 13% of the population.”

See also the previous Wild Reed posts:
• Insurrection at the United States Capitol
• Michael Harriot: Quote of the Day – January 7, 2021
• Acknowledging Where We Are
• The Republican Party in a Nutshell
• “The Republican Party Has Now Made It Official: They Are a Cult”
• “Fascism Is Upon Us”
• “I Can't Breathe”: The Murder of George Floyd
• He Called Mama. He Has Called Up Great Power
• Honoring George Floyd
• “New and Very Dangerous”: The Extreme Right-Wing Infiltration of the George Floyd Protests
• Emma Jordan-Simpson: “There Will Be No Peace Without Justice”
• The Language of the Oppressor
• Something to Think About – July 26, 2020
• Out and About – Spring 2020

THE GLOBAL UPRISING AGAINST SYSTEMIC RACISM
Why This Started in Minneapolis – Sharon Holder (CityLab, June 5, 2020).
Minnesota Governor Says Minneapolis Is “Under Assault.” Who Is Behind the Protests? – Chris McGreal (The Guardian, May 30, 2021).
In Portland’s So-Called War Zone, It’s the Troops Who Provide the Menace – Nicholas Kristof (The New York Times, July 25, 2020).
The Rest of the World Sees Uprisings, Not Riots – Reese Erlich (The Progressive, June 4, 2020).

Labels: Black Lives Matter, Resisting Corporatism and Fascism, Something to Think About