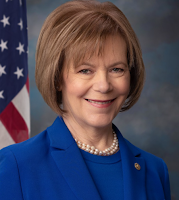 Tina Smith is a U.S. senator from Minnesota who recently shared on Facebook her very insightful and cogent thoughts on why the U.S. Senate’s filibuster rule, which requires a 60-vote supermajority to pass legislation, needs to be abolished.

Smith’s piece, subsequently republished at Common Dreams, is reprinted below with added links.

The Senate needs to abolish the filibuster. Right now, the Senate has 50 Republican senators. They represent less than 44% of America. And yet they still have the power to stop us from passing laws that a majority of America wants. I’ve spent a lot of time thinking about this, and to be honest I started out believing we should keep the filibuster. Without it, I reasoned, what would stop a conservative president and Congress from doing terrible damage to women’s health care, voting rights and civil rights. But the more I thought about it, the more I realized that the filibuster has long been the enemy of progress. In fact, it’s been a highly effective tool to thwart the will of the people.

The U.S. Senate has a lot of rules that most people don’t understand – including most Senators. Most of these rules don’t spring from the Constitution or the minds of the founders; they have grown out of a centuries long battle between about who gets to decide.

So who does decide? You may think the answer is obvious: In our Republic, the people decide. In state legislatures, city halls, county boards and in the U.S. House of Representatives, a majority of those elected by the people decide. But in the U.S. Senate, the rules are uniquely different. In reality, every day in the U.S. Senate a minority can decide. And they do it by threatening to talk to death any idea, policy or proposal that they don’t like. That’s what the filibuster is. And that’s why it has to go.

The filibuster didn’t come from the Constitution, or from our founders. It grew up as tool developed by a minority in the senate – mostly white, racist Southern senators from the Democratic party – to protect their interest in owning and exploiting Black bodies. After the Civil War, and passage of the 13th, 14th and 15th amendments, and after a brief period of hopefulness for the future of Black Americans, the filibuster became an even more powerful tool, used to deny voting rights and the opportunity for Black people to own a home or land, and to build wealth and opportunity for their own families.

If you have fond memories of watching the movie Mr. Smith Goes to Washington, and the heroic Mr. Smith using the power of debate to turn the Senate toward more justice, I’m sorry to tell you that does not happen in the Senate. In fact, the modern filibuster usually doesn’t include any debate at all. What happens is that a senator merely threatens to filibuster, then they go home to dinner. There’s no debate and not even any talking. And definitely not any legislating.

Some will argue that the filibuster is a crucial stopgap, designed to protect the rights of the minority against an overweening majority that would trample those rights. They say that the filibuster encourages compromise and it makes the Senate the famous “cooling saucer” that stops the federal government from careening from one extreme to the other. I’ve not seen that. What the filibuster does is allow a minority of Senators to just say no to any idea they don’t like. They don’t have to negotiate because they can stop anything. [Republican Senator] Mitch McConnell is the master of obstruction, but the big problem is that this is fundamentally undemocratic.