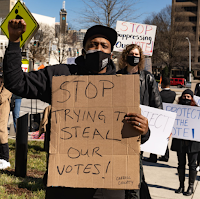 Republican state legislatures are gerrymandering districts to elect members to the House of Representatives. The results are extreme.

Skewing election results toward Republicans plays to former president Donald Trump, who tried to steal the 2020 election by using the power of the federal government to hamstring his Democratic opponent.

Meanwhile, a coalition of nearly 60 advocacy groups is warning of the need to defend democracy ahead of the 2022 midterm elections – including by passing the Freedom to Vote Act. In issuing their warning, the coalition cited “unprecedented and coordinated” Republican efforts to undermine public trust in the U.S. electoral system.

Following is an excerpt from the open letter that the coalition (which includes MoveOn.org, Protect Democracy, Public Citizen, SEIU, and the Sierra Club) released earlier today.

Our democracy faces an existential threat – the very real possibility that the outcome of an election could be ignored and the will of the people overturned by hyperpartisan actors. Since the 2020 election, we have seen unprecedented and coordinated efforts to cast doubt on the U.S. election system. These efforts have taken many forms, including widespread disinformation campaigns and baseless claims of election fraud, . . . intimidation of election officials and administrators just for doing their jobs, new state laws to make election administration more partisan and more susceptible to manipulation or sabotage, and outright violence. . . . [T]hese efforts took on entirely new ferocity with the advent of former President [Donald] Trump’s “Big Lie” regarding the 2020 presidential election.

The danger posed by the concerted effort to spread disinformation and undermine confidence in our elections is not hypothetical or speculative. We have already seen tragic consequences in the form of a violent insurrection at the Capitol on January 6.

Despite the fact that experts across the political spectrum – including Trump’s own Department of Homeland Security – have confirmed that the 2020 election was as free, fair, and secure as any in American history, Trump and his supporters have done all they can to cast doubt on the integrity of the process.

. . . We must push back on dangerous state initiatives that endanger democracy; Congress must enact critical provisions to protect federal elections and elections officials from partisan attacks and subversion, such as those included in the Freedom to Vote Act; and legal remedies must be brought to bear as needed.

Further, elected officials and public servants at all levels must condemn attacks on the processes that allow for free and fair democratic elections, free of partisanship.

To read the coalition’s open letter in its entirety, click here. 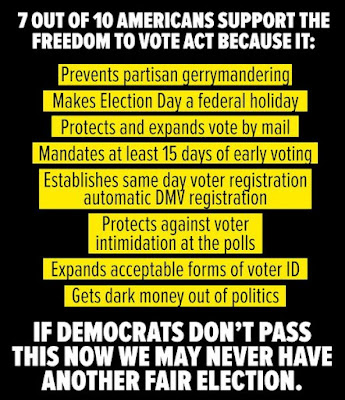 See also the previous Wild Reed posts:
• Meagan Hatcher-Mays: Quote of the Day – November 3, 2021
• Peter Certo: “We Can Have the Filibuster or Democracy – But We Can’t Have Both”
• Sen. Tina Smith: The Filibuster Rule Is “Fundamentally Undemocratic”
• Rep. Ilhan Omar: Quote of the Day – May 29, 2021
• Heather Cox Richardson on Combating the Republican Party’s “Rigging of the System”
• Something to Think About – March 9, 2021
• Insurrection at the United States Capitol
• Republicans Don’t Care About American Democracy
• “The Republican Party Has Now Made It Official: They Are a Cult”