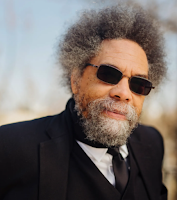 Journalist and novelist Vinson Cunningham recently interviewed Cornel West, who for over three decades has been “one of the preëminent public philosophers in America.”

The following words and insights of West really speak to me. Perhaps they will to you as well.

When you have a vocation, as opposed to just a profession, and a calling as opposed to a career, then you’re really trying to proceed in the spirit of integrity, and you’re going to find persons who also have that same sense of vocation, no matter what color they are. And you form some genuine relations and friendships and brotherhoods and sisterhoods and siblinghoods, as my nonbinary folk would say.

But the problem is that, these days, everybody wants their brand to be so commodified, rather than to find their cause and be so courageous that they’re willing to pay a cost and take a risk for their cause, not just their careers. That’s a spiritual decay right there, and that cuts across region, race, class, gender, sexual orientation – across the board. We see gangsterization and thuggishness, every color, every gender, every sexual orientation, and we see it in every class, but those at the top see the élites unaccountable. Say anything, do everything: no answerability at all.

That’s not just brother Trump, even though he’s a neo-Fascist one. He’s on the continuum with so much of the professional-managerial class in terms of their lack of accountability to working people and poor people. Once you have that kind of spiritual decay and moral decrepitude . . . then it’s just gangsterization on steroids, man. That’s where America’s headed. I tried to say the same thing in Democracy Matters, but it was hard for that book to gain visibility, partly because of what I said about the Middle East. I talked about the gangsterization. Through what? Militarism, free-market fundamentalism, and increasing authoritarianism that’s become neo-Fascism in its expressions. And that’s eighteen years ago.

. . . The Democratic Party is in deep trouble. The neoliberal vision of brother Biden, which, in his own individual case, is predicated on crimes against humanity in terms of mass incarceration, the invasion and occupation of Iraq, and the Wall Street bailout that led toward the collapse of so many poor and working people’s life chances – to me those are crimes against humanity, just as a person that’s trying to be decent in the world, the crushing of lives of so many folk, the killing of so many folk in Iraq and so on. But he’s still better than Trump. Now, good God almighty, we wonder why we are so desperate.

It’s very clear he turns out to be milquetoast, and the only way he can deliver is the opposing posture, as if you put a Black sister on the Supreme Court and you satisfy the Black women who voted. You’re going to tell me that Black women voted solely to have a representative on the Supreme Court, and not to deal with Black people, Black children, and other folk who are suffering economically and socially? All you need is just a Black woman on the Court, and you’re satisfied now? Most Black sisters out there that I know did not go out for that. But, of course, we want a Black progressive on the court, and a Black woman, fine. But he can’t fight for voting rights for a whole year, can’t hardly engage in any courageous action for that for a whole year? [After Biden announced his selection of Ketanji Brown Jackson, I asked West what he thought of the choice. “It’s a beautiful thing,” he said. “I applaud Black success. The challenge is: how do we sustain Black moral greatness?”]

[Biden’s] not dealing with deportation. [He’s] still locked into a very knee-jerk defense of NATO so that the militarism still goes on – everybody knows if Russia had troops in Mexico or Canada there would be invasions [of those countries] tomorrow. He sends the Secretary of State, telling Russia, “You have no right to have a sphere of influence,” after the Monroe Doctrine, after the overthrowing of democratic regimes in Latin America [by the U.S.] for the last hundred-and-some years. Come on, America, do you think people are stupid? What kind of hypocrisy can anybody stand?

That doesn’t mean that Putin is not still a gangster – of course he is. But so were the folk promoting the Monroe Doctrine that had the U.S. sphere of influence for decade after decade after decade after decade, and anybody critical of you, you would demonize. Yet here are you, right at the door of Russia, and can’t see yourself in the mirror. That’s spiritual decay right there, brother, it really is.

. . . The sad thing is that neither the neo-Fascists nor the neoliberals have too much deep love of poor and working people across race, gender, and nation, and very few of them are committed to democratic processes all the way down. And so things really begin to get very confusing on a surface level. But when you really scratch beneath that surface, you can still see just how empty and decrepit, spiritually and morally, both the neo-Fascists are, with all of their ugliness, and the neoliberals, with all of their hypocrisy. Because if we can’t provide an alternative vision between neoliberalism and neo-Fascism, then, as neoliberalism goes under, America will go neo-Fascist. Period.

. . . Certain kinds of democratic processes are precious and fragile. That’s why we try to hold on to them. We’re losing those, too. And that’s why these days are so grim and dim. And that’s why we have to be committed to being certain kinds of persons, no matter what the possibilities are for triumph. We have a chance of a snowball in Hell of fighting for freedom. We fight anyway, because it’s right and because it’s just. And we just get crushed when we get crushed, but we get crushed with a smile.

See also the previous Wild Reed posts:
• “Two of the Most Dedicated and Enlightened Heroes of Present Day America”
• Cornel West: “Of Course America Is Racist”
• Cornel West: Quote of the Day – December 3, 2020
• A Deeper Perspective on What’s Really Attacking American Democracy
• The Problem Is Ultimately Bigger Than Individuals. It’s Systemic
• Reacting to the Effects, Not the Cause, of What Ails Us
• Making the Connections . . . Then and Now
• Hope Over Fear
• Hope in the Midst of Collapse
• Balancing the Fire
• Discerning and Embodying Sacred Presence in Times of Violence and Strife
• The End of the World As We Know It . . . and the Beginning As We Live It
• Buffy Sainte-Marie’s Medicine Songs
• Soul: The Connecting Force in Life