The Neoliberal Economic Doctrine: A View from Australia

A common thread that runs through The Wild Reed is the critique of the economic doctrine known as neoliberalism.

As I've noted previously, I first became aware of the term neoliberalism when I was involved in various protests against corporate-led globalization in the late 1990s/early 2000s. Thanks to the writings of people such as Susan George, Vandana Shiva, David Korten, and Naomi Klein, I not only began to understand that neoliberalism was the name given to the "profits over people" ideology that underpins corporate-led globalization, but that such an ideology must be resisted if environmental sustainability is to be achieved and humanity is to have a future marked by justice and compassion.

As an economic ideology, neoliberalism is most famously associated with the policies introduced by Margaret Thatcher in the United Kingdom and Ronald Reagan in the United States. In the 1990s many of these policies were embraced by the Democratic party in the U.S. under President Bill Clinton. Some academics see the implementation of neoliberal policies and the acceptance of neoliberal economic theories in the 1970s as the root of financialization and of one of this form of capitalism's most destabilizing consequences, the financial crisis of 2007–08.

Writing after this and a string of other crises, George Monbiot reminds us that "neoliberalism sees competition as the defining characteristic of human relations. It redefines citizens as consumers, whose democratic choices are best exercised by buying and selling, a process that rewards merit and punishes inefficiency. It maintains that 'the market' delivers benefits that could never be achieved by planning."

Because of its devastating economic and political impact on people, culture, and the environment, Monbiot refers to neoliberalism as "the God that failed" and as "the zombie doctrine at the root of all our problems."

Susan George offers some helpful historical perspective and some hope when, in her invaluable little book, Another World Is Possible, If . . ., she writes: "Whatever the qualifiers used – corporate-led, finance-driven, or neoliberal – they all describe world capitalism’s most recent phase which it entered roughly around 1980. From the onset, say about 500 years ago, capitalism existed as a global phenomenon. The difference today lies in its scope and the nature of its major actors: giant corporations and mega-financial institutions now have remarkable latitude to set rules that govern everyone, especially because they also frequently control the media. They seek ever greater power to bend national and international policies to fit their needs. . . . Fortunately, both anger and revolt are on the rise." 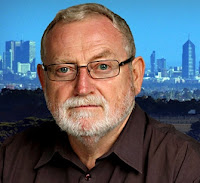 Indeed. . . . And in his July 24, 2017 column, Sydney Morning Herald economics editor Ross Gittins (right) not only acknowledges this backlash but places it within the Australian socio-economic context. He also coins the phrase "bizonomics" to describe the neoliberal belief that what is good for big business is automatically good for the economy. Following is an excerpt from Gittins' recent column, "Big Business Influence Wanes as Public Rejects Credo of 'Bizonomics'."

The collapse of the "neoliberal consensus" is as apparent in Oz as it is in Trump's America and Brexitting Britain, but our big-business people are taking a while to twig that their power to influence government policy has waned.

Their trouble is the way the era of micro-economic reform initiated by the Hawke-Keating government in the 1980s eventually degenerated into "bizonomics" – the pseudo-economic belief that what's good for big business is good for the economy.

Part of this is the belief that when you privatise a government-owned business, or outsource the delivery of government services to for-profit providers – when you move economic assets and activity from the "public" column to the "private" column – you're self-evidently raised economic efficiency and wellbeing. . . . These days, it's not just leftie troublemakers who doubt that benefits going direct to big business will trickle down to the rest of us, it's every punter in the street.

Another element of bizoneconomics is governments in many anglo-phone countries maintaining the facade, but not the substance, of business regulation. They tell the public it's protected by laws governing treatment of consumers, employees, shareholders, taxpayers and others, but then rob the regulatory agencies – in our case the ACCC, Fair Work ombudsman, ASIC and the Tax Office – of the resources they need to adequately enforce the laws they administer.

In this game of nudging and winking, it didn't take long for business to realise that, its chances of apprehension being tiny, obeying any law it found standing in the way of higher profits was now optional. And that, though they could never admit it, this was the way governments of both colours secretly wanted it to be. This is what explains the plethora of business law-breaking being uncovered by Fairfax's Adele Ferguson and other investigative journalists. What's notable is the way the business lobby groups have failed to condemn corporate law-breaking.

A few decades of bizonomics have left our big business chiefs with the assurance they possess a God-given right to have their every demand accommodated.

Sorry guys, democracies don't work that way. In the end, power derives from voting punters, not corporations making generous donations to party coffers. The donations work only as long as the pollies can use them to amass enough votes for a government trying to swing it for big business.

That's what's no longer happening and the sooner you wake up to it, the sooner you can move to profit-making Plan B: find it within your business, not by lobbying Canberra.

NEXT: Guruk Seascapes, From Dawn to Dusk