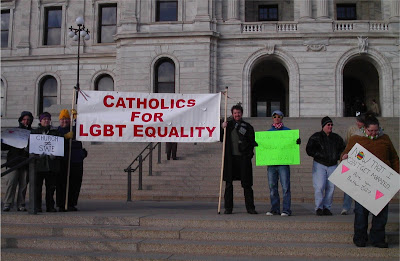 Around the nation and the world today Catholics joined with hundreds of thousands to protest what Jim Burroway has called “the unprecedented stripping of rights from gays and lesbians with the passage of California’s Proposition 8, as well as the passage of anti-marriage amendments in Arizona and Florida.”

In the photo above, David McCaffrey (left), co-founder of the Catholic Pastoral Committee on Sexual Minorities (CPCSM), and I stand on the steps of the Minnesota Capitol in St. Paul, holding a banner that declares: “Catholics for LGBT Equality” (a banner that was originally created by Catholic Rainbow Parents Mike and Mary Lynn Murphy for this event). 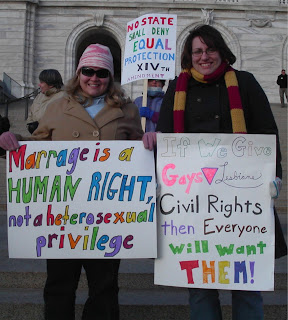 One of the speakers at today’s rally in St. Paul, Minnesota Senator Patricia Torres Ray (DFL, District 62), made special note of our banner when she remarked that the reason she works for the civil rights of gays and lesbians is precisely because she is Catholic. It was a great moment!

Torres Ray clearly recognizes and seeks to embody Catholicism's long and rich tradition of working to increase the well-being of all - though especially those who are disadvantaged and marginalized. I find it intriguing that when it comes to women and LGBT people, the laity is quite a few steps ahead of the hierarchy in this regard. For instance, a study earlier this year by the Pew Forum of Religion in America showed, 58% of Catholics favor acceptance of homosexuality. Such approval is proportionately greater in the Roman Catholic Church than in other Christian churches or in the nation as a whole. In addition, a study by the Cardinal Newman Society’s Center for the Study of Catholic Higher Education has found that 57% of students in Catholic universities and colleges believe same-gender marriage should be legal. 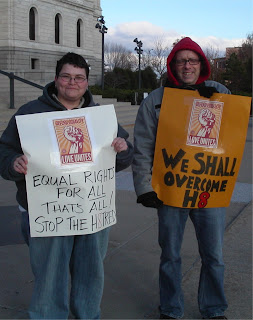 Of course, these figures will only increase with time - both within and beyond Catholicism. In other words, the granting of civil marriage rights for gays and lesbians is inevitable.

This afternoon’s rally in St. Paul drew about 200 people. An earlier protest in downtown Minneapolis reportedly drew between 500 - 1,000. In other parts of Minnesota, Prop 8 protests took place in Duluth and Moorhead.

Below are more photographs from today’s rally at the Minnesota State Capitol. These are followed by excerpts from Associated Press writer Jay Lindsay’s article, “Across Nation, Gay Advocates Protest Marriage Ban.” 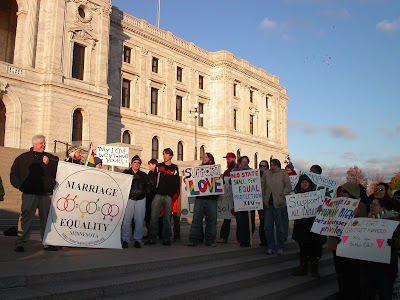 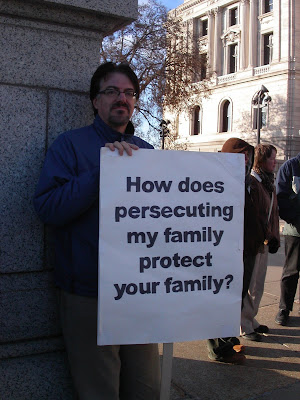 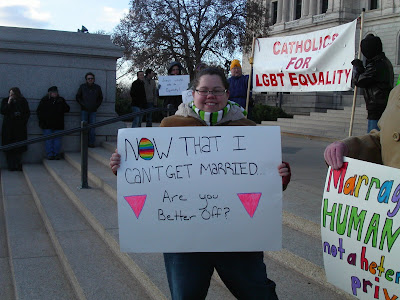 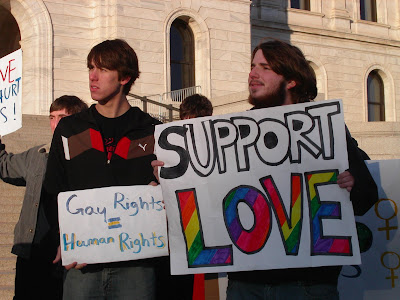 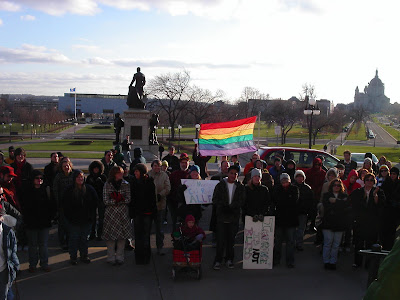 Gay rights supporters waving rainbow colors marched, chanted and danced in cities coast to coast Saturday to protest the vote that banned gay marriage in California and to urge supporters not to quit the fight for the right to wed.

Crowds gathered near public buildings in cities large and small, including Boston, San Francisco, Chicago and Fargo, to vent their frustrations, celebrate gay relationships and renew calls for change.

“Civil marriages are a civil right, and we’re going to keep fighting until we get the rights we deserve as American citizens,” Karen Amico said in Philadelphia, holding up a sign reading “Don’t Spread H8.”

“We are the American family, we live next door to you, we teach your children, we take care of your elderly,” said Heather Baker a special education teacher from Boston who addressed the crowd at Boston’s City Hall Plaza. “We need equal rights across the country.” 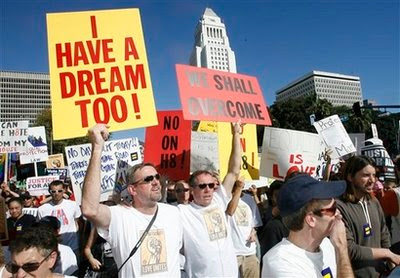 Connecticut, which began same-sex weddings this past week, and Massachusetts are the only two states that allow gay marriage. The other 48 states do not, and 30 of them have taken the extra step of approving constitutional amendments. A few states allow civil unions or domestic partnerships that grant some rights of marriage.

Protests following the vote on Proposition 8 in California, which defined marriage as between a man and a woman, have sometimes been angry and even violent, and demonstrators have targeted faiths that supported the ban, including the Mormon church.

However, representatives of Join the Impact, which organized Saturday’s demonstrations, asked supporters to be respectful and refrain from attacking other groups during the rallies. 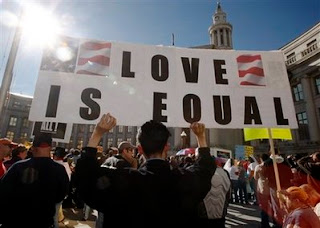 Seattle blogger Amy Balliett, who started the planning for the protests when she set up a Web page three days after the California vote, said persuasion is impossible without civility.

“If we can move anybody past anger and have a respectful conversation, then you can plant the seed of change,” she said.

Balliett said supporters in 300 cities in the U.S. and other countries were holding marches, and she estimated 1 million people would participate, based on responses at the Web sites her group set up.

“We need to show the world when one thing happens to one of us, it happens to all of us,” she said. 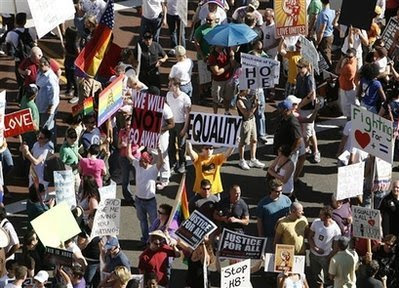 The protests were widely reported to be peaceful, and the mood in Boston was generally upbeat, with attendees dancing to the song “Respect.” Signs cast the fight for gay marriage as the new civil rights movement, including one that read “Gay is the new black.”

Image 9: Alexander Sanchez of San Francisco, waves a rainbow colored flag to a large crowd of supporters of same-sex marriage as they cheer in front of San Francisco City Hall on Saturday, Nov. 15, 2008. Thousands of demonstrators gathered to listen to speakers and protest the passage of Proposition 8, a ballot measure amending California’s constitution to ban same-sex marriage. The event is part of a simultaneous protest planned in hundreds of communities. (Associated Press Photo/Darryl Bush)

Images 10 and 12: Demonstrators turn out for marriage equality at Los Angeles City Hall as part of a National Day of Action in response to the recent passage of Proposition 8 which repeals the right of same sex couples to marry in California, Saturday, Nov. 15, 2008, in Los Angeles. (AP Photo/Gus Ruelas)

Image 11: Luke Duran holds up a sign during a protest against the passage of Proposition 8 in California, outside the City/County Building in Denver on Saturday, Nov. 15, 2008. Nearly 1,000 people were there to voice their opposition to Proposition 8. (AP Photo/David Zalubowski)

The Workers Int'l League were at the Minneapolis demo.

Awesome! It's so uplifting to see religious support for the LGBT community.