Italian Cardinal Calls for a “New Vision” for Sexuality 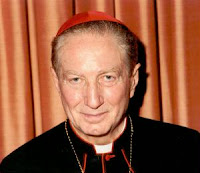 Perusing through the latest issue of the National Catholic Reporter today on the bus, I came across the following “World News Brief” that caught my attention - and gives me hope!

“radical” call for reform of the Church’s sexual theology.)

“New Vision” for Sexuality Needed
National Catholic Reporter
November 14, 2008
Italian Cardinal Carlo Maria Martini said the 1968 encyclical Humanae Vitae (“Of Human Life”) has cut off the church from many of the people who most need its advice about human sexuality and suggested it may be time for a “new vision” for sexuality and birth control.

The encyclical, which teaches that artificial birth control is morally wrong, caused a large number of people to stop taking the church’s views seriously, Martini said. “Serious damage was done.”

Martini, an 81-year-old Jesuit and the former archbishop of Milan, made the comments in a book-length interview titled Nighttime Conversations in Jerusalem. He did not address specifically the morality of contraception but suggested that the question might be better approached from a more pastoral perspective.

Today, he said, the church might be able to adopt “a new vision” and indicate “a better way” than it did in Humanae Vitae. “The church would regain credibility and competence,” he said.

“Knowing how to admit one’s errors and the limitations of one’s previous viewpoints is a sign of greatness of soul and confidence,” he said.

He said the church should take a positive approach to human sexuality, with less emphasis on prohibitions. “Whatever the church affirms, it should be supported by many people, by responsible Christians who want to be conscientious in love,” he said.


See also the previous Wild Reed posts:
Robert McClory on Humanae Vitae
An Australian Bishop’s “Radical” Call for Reform
Stop in the Name of Discriminatory Ideology
The Non-Negotiables of Human Sex
Relationship: The Crucial Factor in Sexual Morality
Joan Timmerman on the “Wisdom of the Body”
How Times Have Changed
A Church That Can and Cannot Change
Truth Telling: The Greatest of Sins in a Dysfunctional Church
A Catholic Understanding of Faithful Dissent (Part 1)
A Catholic Understanding of Faithful Dissent (Part 2)
Posted by Michael J. Bayly at 9:02 AM

I am taking a class on sacraments at a Catholic graduate school and the topic of how sin is perceived came up during our talks on reconciliation. This led to Humanae Vitae and how that impacted so much of how church authority is perceived in relation to sin and penance.

Which then took a sharp and off-topic, but meaningful conversation about human sexuality. It will be interesting if we can revisit that with this from Martini.

Something must change - the truth never does. Our understanding of that truth - that is another matter.

"Prohibitions" can help one be "conscientious in love." "Don't commit adultery" is certainly one of those helpful prohibitions.

What is the Cardinal saying, that its better to say "Be faithful" than to say "Don't commit adultery?"

For centuries many Catholics bemoaned the "captivity" of the papacy by Italians. After JPII and Bene-boy, how many long for the days of a compassionate and human Italian!

Italian Cardinal Carlo Maria Martini said the 1968 encyclical Humanae Vitae (“Of Human Life”) has cut off the church from many of the people who most need its advice about human sexuality and suggested it may be time for a “new vision” for sexuality and birth control.

It seems to me that Martini's dissent may be motivated more by despair than by Christian hope. The difficult teaching about artificial birth control seems like too much to ask, or too far removed from the daily realities and hard choices of human life. It's tempting, when faced with suffering, to want to lighten the load by removing the burden of the cross from our lives. But Jesus has proclaimed a great paradox: that his yoke is freedom, that his burden is light.

I would agree that a positive approach to human sexuality, rather than one that emphasizes prohibitions, is essential. However, I think that John Paul II's teaching on the Theology of the Body does precisely that... getting us past a shame-based ethic of "dont's" and raising our eyes to the beautiful vision of what our bodies and sexuality are capable of revealing. (I know Luke Timothy Johnson disagrees... at some point I will give his treatment a detailed response).

This is all fresh in my mind as yesterday I attended an all-day seminar on the Theology of the Body offered to all teachers in the archdiocese of Los Angeles. It was presented by Christopher West, and I also had the opportunity to join Christopher for a private lunch. He specifically spoke about the need to get beyond the "body bad / spirit good" attitude that so many of us received in our homes and Catholic classrooms growing up... and said that, too often, we received the negative message "don't eat from the dumpster" instead of the inspiring call of "welcome to the banquet."

It's funny now, but he was the progressive papabile that was supposed to cancel out Cardinal Ratzinger.

Well, Clayton, I’ll say this for you: You’re a tireless defender of John Paul II’s Theology of the Body!

My own views on this way of looking and speaking about sexuality are well documented on this site (see here and here.)

Also, I don’t subscribe to the idea that faithful dissent is a product of despair. The people I know who faithfully dissent are the most positive and hopeful people around. From my experience it’s those who cling doggedly to the “old ways,” who refuse to be open to the Spirit within the lives and relationships beyond those deemed acceptable who often come across as rather grim and negative. (And by the way, I don’t include you in this crowd!)

I appreciate Christopher West’s metaphor of “the banquet.” It’s just that it’s a pity that the menu of his banquet is so limited.

One final point: Before the Church can be a teaching church it first needs to be a listening church. With regards to the issue of sexuality, the institutional church has failed miserably in this. A sexual theology that denies the beauty of human sexual diversity, that refuses to listen and learn from all its members, will never be able to articulate a theology that affirms and inspires all of these people. It will never be a truly catholic theology.

I find it ironic that the most catholic sexual theologies are currently found in faith communities beyond the Roman Catholic Church.

I'd be interested, Michael and Clayton, how each of your, respectively, would incorporate the viewpoint expressed in this book into a theology of sexuality. See http://www.amazon.com/Cracked-Life-Edge-Rehab-Clinic/dp/0060096551/ref=sr_1_1?ie=UTF8&s=books&qid=1227373272&sr=1-1