Unrest in California Over Passing of Proposition 8 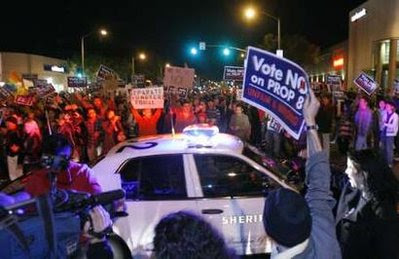 The Associated Press is reporting that in the past 48 hours hundreds of people have taken to the streets to protest California’s new ban on gay marriage. The protests are taking place, says the news agency, “amid deepening political turmoil and legal confusion over who should have the right to wed.”

Following are images from the various protests that have taken place throughout California in the past two days, and more of Associated Press writer Paul Elias’s report on this unrest.

On Thursday, about 1,000 gay-marriage supporters demonstrated outside a Mormon temple in the Westwood section of Los Angeles. Sign-waving demonstrators spilled onto Santa Monica Boulevard, bringing afternoon traffic to a halt. The temple was targeted because the Mormon church strongly supported the ban on gay marriage.

“I’m disappointed in the Californians who voted for this,” said F. Damion Barela, 43, a Studio City resident who married his husband nearly five months ago. He noted that nearly 70 percent of black voters and a slight majority of Hispanic voters voted for the ban.

“To them I say, ‘Shame on you because you should know what this feels like,’” he said. 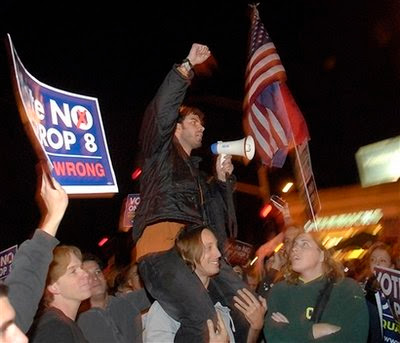 Above and below: Supporters hold signs during a “No on Prop 8” rally
in West Hollywood, California, November 5, 2008. Opponents of
Proposition 8 gathered to criticize passage of the initiative defining
marriage as between one man and one woman.
(REUTERS/Mario Anzuoni) 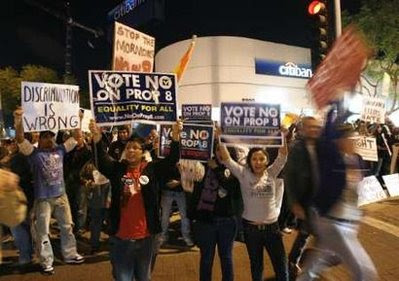 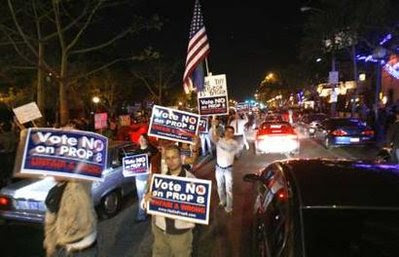 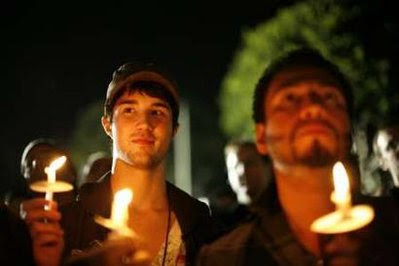 Some spectators cheered from apartment balconies; one person threw eggs at the marchers. Two people were arrested after a confrontation between the crowd and an occupant of a pickup truck that showed a banner supporting the amendment. 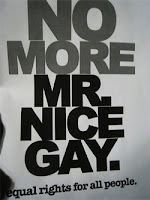 On Wednesday night, police in Los Angeles arrested seven people as more than 1,000 protesters blocked traffic in West Hollywood. One man was wrestled to the ground by police after he jumped up and down on the roof of a squad car. Another man was clubbed by police. Hundreds of protesters also gathered on the steps of San Francisco’s City Hall, some holding candles and carrying signs that read, “We all deserve the freedom to marry.”

Gay-marriage proponents filed three court challenges Wednesday against the new ban. The lawsuits raise a rare legal argument: that the ballot measure was actually a dramatic revision of the California Constitution rather than a simple amendment. A constitutional revision must first pass the Legislature before going to the voters.

“Where do you draw the line between ‘revision’ and ‘an amendment’ when those are words in conversation we would use interchangeably?” asked Erwin Chemerinsky, dean of the University of California, Irvine law school. “It’s a highly technical legal question in a highly charged political atmosphere.”

Andrew Pugno, attorney for the coalition of religious and social conservative groups that sponsored the amendment, called the lawsuits “frivolous and regrettable.”

“It is time that the opponents of traditional marriage respect the voters’ decision,” he said. 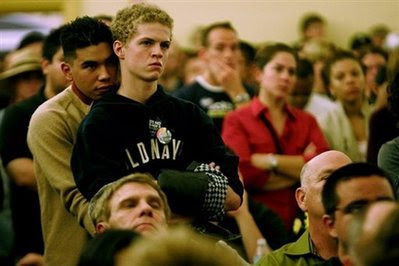 Above: Members of the gay and lesbian community listen to speakers
during a Proposition 8 opposition rally in San Diego.
(AFP/Getty Images/Sandy Huffaker) 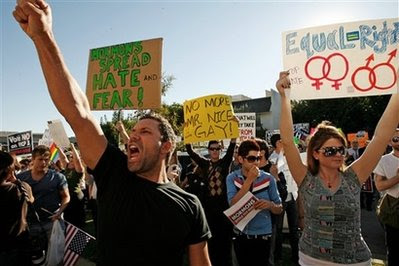 Above and below: Protestors take part in the “No on Prop 8”
march and rally in front of the Mormon Church to protest the
church’s support of Prop 8, Thursday, Nov. 6, 2008, in Los Angeles.
(AP Photo/Damian Dovarganes) 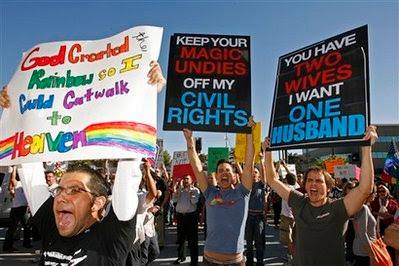 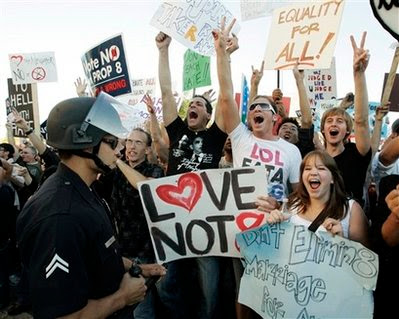 Above: Protesters wait at a police skirmish line before being allowed
to proceed as hundreds demonstrated against the Mormon Church's
support of Proposition 8, the California ballot measure that banned
gay marriage, in the Westwood district of Los Angeles
- Thursday, Nov. 6, 2008. (AP Photo/Reed Saxon) 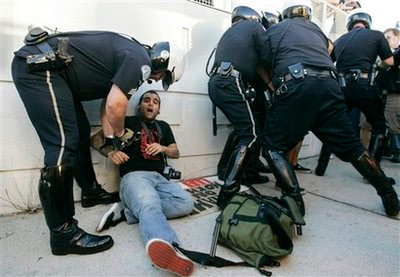 Above: Los Angeles police officers arrest a pair of protesters
as hundreds demonstrated against the Mormon Church's
support of Proposition 8. (AP Photo/Reed Saxon)

The high court has not said when it will act. State officials said the ban on gay marriage took effect the morning after the election.

“We don't consider it a ‘Hail Mary’ at all,” said Kate Kendell, executive director of the National Center for Lesbian Rights. “You simply can’t so something like this — take away a fundamental right at the ballot.”

With many gay newlyweds worried about what the amendment does to their vows, California Attorney General Jerry Brown said he believes those marriages are still valid. But he is also preparing to defend that position in court.

“I wish I could be comforted by Attorney General Brown’s statement that it has no retroactivity,” said Loyola Law School professor Bill Araiza, who married his same-sex partner Oct. 29. “But it's in flux and I just don’t know.”

The amendment does not explicitly say whether it applies to those already married. Legal experts said unless there is explicit language, laws are not normally applied retroactively.

“Otherwise a Pandora’s Box of chaos is opened,” said Stanford University law school professor Jane Schacter. Still, Schacter cautioned that the question of retroactivity “is not a slam dunk.”

An employer, for instance, could deny medical benefits to an employee’s same-sex spouse. The worker could then sue the employer, giving rise to a case that could determine the validity of the 18,000 marriages.

Supporters of the ban said they will not seek to invalidate the marriages already performed and will leave any legal challenges to others.

A 2003 California law already gives gays registered as domestic partners nearly all the state rights and responsibilities of married couples when it comes to such things as taxes, estate planning and medical decisions. That law is still in effect. 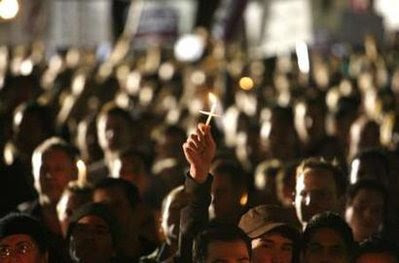 Above: Supporters gather during a “No on Prop 8” rally
in West Hollywood, California, November 5, 2008.
(REUTERS/Mario Anzuoni)


NOTE: To sign a petition to support the legal effort to amend US tax laws so that the Mormon Church, Roman Catholic Church, and other transgressing churches would lose tax-exempt status if they continue lobbying for state propositions, click here.

The debut of "Mllk" will have increased resonance. And he would have applauded that - actually, I suspect he would have vastly preferred a film about him be more political than reverential.

The behavior of the Prop 8 opponents has been pretty embarrassing. If tolerance is what they really want, why can't they demonstrate the same?

I doubt if all Prop 8 opponents are engaging in this reprehensible behavior.

I note that this news story comes from a Catholic news site. Could it be that the hierarchy's penchant for painting all gays with some pretty broad brush strokes is rubbing off?

Of course not all Prop 8 opponents are misbehaving. It will be interesting to see if the opponents can assume a unified, peaceful stance. It will be difficult, since the activists seem to simultaneously say: we respect that not everyone thinks homosexual unions are morally right, but we reserve the right to a different morality. I'm not exactly sure how you have peaceful coexistence with opposing moral worldviews.

BTW, the article I linked to quoted a police officer, not a Catholic official. And the secular press is carrying similar stories. So I don't think it's simply a Catholic bias.