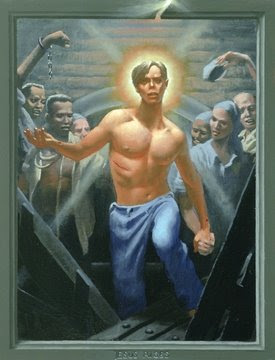 Some people question if the struggle for civil marriage rights for gay people is comparable to the struggle for a range of civil rights by African Americans in the 1960s. Following is a great reflection on this important issue by an African-American professor of theology, Diana Hayes.

Hayes originally wrote this piece for the National Catholic Reporter in 2005, but given that the topic of same-gender marriage is still very much in the news, it’s one that remains very relevant.

In her reflection, one that she entitles “God Don’t Make Ugly,” Hayes talks about her journey from resenting the LGBT movement’s use of civil rights language to her realization that “civil rights for those in the gay/lesbian movement are based on the same premise that all of us claim: the right to live life fully and completely in a style and manner that fits who you are, a human being.”

There was a time when I was appalled and upset upon hearing that the gay/lesbian movement was using the songs and ideas of Martin Luther King Jr. and others from the civil rights movement. How dare they take a movement that had involved millions of every creed and color in a life-and-death struggle for liberation and use it for their issues? My anger, like that of many black Christians then and now, was a result of a narrow understanding of brother and sisterhood and a refusal to recognize the struggle that gay/lesbian/bisexual/transgender persons were engaged in.

Like many today, I felt they were asking for special privileges, whereas black Americans’ issues dealt with human rights and dignity. I was also upset, as were others, by what seemed to be the appropriation of black issues by whites who, despite any problems they might have, were still white with all of the privileges that whiteness entailed.

How wrong I was. As I became engaged in the study of the black liberation movement and of the many theologies that had, like black theology, been catalyzed by the civil rights movement, I realized how narrow-minded and indeed homophobic I had been. The gay/lesbian/bisexual/transgender liberation movement is, quite simply, another example of the catalytic impact the civil rights movement of the 1960s had, not just in the United States but throughout the world. Neither I nor anyone else can box up, claim ownership of, or in any other way attempt to limit the movement of the Holy Spirit as she ignites a spark of hope within anyone and everyone she chooses. That is the true meaning of Jesus’ life, death and resurrection.

The issue is not one of “special treatment.” Those in power have historically used that charge to prevent others over whom they have or seek to have power from gaining equality with them. Civil rights for those in the gay/lesbian movement are based on the same premise that all of us claim: the right to live life fully and completely in a style and manner that fits who you are, a human being. To claim otherwise is to deny their humanity and their creation by God. Are they in some way lesser humans? Are they sub-human?

I would hope we would all agree that such claims are ludicrous as well as offensive. They are the same arguments that were used time and time again to restrict the rights and impugn the humanity of persons of African descent, of Latinos/as, of Native Americans and of women of all races and ethnicities. Sadly, some of the teachings of our church lend themselves to such assertions. Just as some used Christian scripture to support African slavery, so today some use scripture to support homophobia. This is an abuse and misuse of the word of God.

Is it not extraordinary that we as Christians are opposing the rights of persons who desire to marry while others historically privileged to do so seemingly desecrate the sacrament with countless divorces, remarriages and annulments? Should we not rejoice that there are those who want to uphold the sanctity of marriage regardless of their gender or sexual orientation? And should we not also keep in mind that there are many who have divorced and remarried for legitimate reasons? The fault, it would seem, lies perhaps with not only our understanding of marriage but also of human relationships.

Yet we still hear pastors in black and other churches pontificate against homosexuals, naming them as sick and twisted beings. Who is the more sick and twisted, those who simply want to live their lives in peace or those who use the word of God to exclude and destroy in God’s name? I did not choose to be born black and there are few whites who, if given the opportunity, would switch skins. Do we really believe, against medical and psychological evidence to the contrary, that a person chooses to be gay, lesbian, transgender and/or bisexual and can therefore be talked or counseled out of it as if it is simply an addiction of some kind? How do we love the “sinner” but hate the “sin” when what we see before us is another human being, made in the image and likeness of God? How do we separate one from the other? We are called to be holistic, “both/and” people yet we persist in our dualistic, divisive ways of thinking and acting.

We who suffered so much at the hands of our fellow citizens and continue to suffer in many ways today should be ashamed to inflict further needless suffering on others. Have we learned nothing about God’s love, which surpasses all human understanding? Should we not be opposed to any form of oppression regardless of who preaches it? As we say in the black community, “God don’t like ugly.” Let him or her who is without sin cast the first stone but don’t be surprised if no one appears, stone in hand, to do so.

Diana Hayes is associate professor of theology at Georgetown University.

Image: “Jesus Rises” (from The Passion of Christ: A Gay Vision) by Douglas Blanchard.
Posted by Michael J. Bayly at 9:05 AM