Why Jesus is My Man 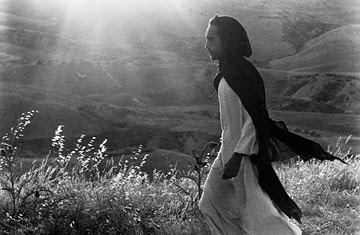 Actually, it was going to be: “Why I Love and Follow Jesus,” which, though no doubt just as corny for some, is probably a better description of what it is I’m trying to get across with this post.


It all started when my friend Paula recently shared with me the response of Bishop John Shelby Spong to the question: “Is there something about the Jesus of history [that allows us to see him today] as an icon of faith?”

I found Spong’s response to this particular question quite moving. Indeed, it triggered an emotional surge of love within me – love for that humble Jewish peasant who walked among us over 2,000 years ago, and love for all who throughout history have sought to follow his example and open themselves to that same transforming and “boundary breaking” spirit of love that he so completely embodied.

Reflecting later on Spong’s words, I realized that they succinctly sum up why it is I feel compelled to love Jesus, and why it is that I hope that when others look at my life, they might be moved to recognize me as a follower of his way of consciousness and compassion.

Following are the words of Bishop Spong that started it all.


I see the primary Jesus experience as being that of a boundary breaker. His humanity and his consciousness seem to me to be so whole and so expanded that he was able to escape the basic human drive of survival that binds so many of us who are less fully developed. Unlike us, he appeared to need no security barrier behind which to hide. He could thus step across the boundaries of tribe, prejudice, guilt, and even religion into a new dimension of what it means to be human, and this is what caused people to experience God present in him. [Of course, it’s also what caused him to get killed.*] His call to us is therefore not to be religious but to be human and to be whole. That is what every gospel symbol, from his miraculous birth to his empty tomb, is seeking to convey, so we read them as doorways into the meaning of God.

* I’ve come to recognize that it was for the message of God’s inclusive love and radical hospitality that Jesus died. Indeed, he believed in this message so much that not even the prospect of torture and death at the hands of those invested in a system of dominating imperial power (a hegemonic power, willing to do whatever it takes to stay in control) could deter him from imparting the liberating message of God’s love and of humanity’s potential to be, like him, living embodiments of this transforming love. 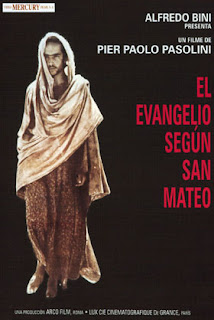 Images: Enrique Irazoqui as Jesus in Pier Pablo Pasolini’s The Gospel According to St. Matthew (1964).

Notes Steven D. Greydanus: “Enrique Irazoqui, a half Jewish, half Basque economics student, had never acted and had no thought of acting when he met Pasolini. Irazoqui’s performance is often noted for its urgency and revolutionary zeal, but what most stands out to me is Irazoqui’s lack of self-consciousness and affectation. Few Jesus films manage to avoid the pitfall of making Christ seem artificially preoccupied with his own authority and status. In productions from the very early 1905 silent Life and Passion of Jesus Christ to Jesus of Nazareth, Christ often seems to wear his divinity like a royal robe (or, in the case of The Last Temptation of Christ, like a horsehair shirt). At the opposite extreme is the casual, unassuming ‘buddy Jesus’ of small-screen productions like the 1999 Jesus and the 2004 Judas, a figure lacking in authority and gravitas. The Gospel According to Matthew is one of the few Jesus films in which Jesus is at once authoritative and forceful, and also unaffected and, for lack of a better term, persuasively human.”


See also the previous Wild Reed posts:
What We Can Learn from the Story of the Magi
Revisiting a Groovy Jesus (and a Dysfunctional Theology)
The Sexuality of Jesus
An Enlightened Exploration of Integrity and Obedience
In the Garden of Spirituality: James C. Howell
On the Road with Punk Rockers and Homeless Mothers
The Harvest Within the Heart
Joy: The Most Infallible Sign of God’s Presence
Reflections on The Da Vinci Code Controversy
Thoughts on The Da Vinci Code
Could Christ Have Been a Woman?
The Triumph of Love: An Easter Reflection
Jesus Lives!

I really like the Spong quote. I just spent a week with Ched Myers where he led a week of Bible Study on Mark 4-8 entitled: Jesus as a Transgressor of Social Boundaries of Race, Class, and Gender. Check out his provocative "Bartimaeus Institute" sometime at www.bcm-net.org

Thanks for the link to the Bartimaeus Institute. I look forward to exploring this particular site.

Will you be sharing on your blog your recent experience of Bible Study with Chet Myers?

I don't think Jesus was of peasant stock. That is an interpretation made and given by Christian churches. I believe there is more than enough evidence in the gospels to indicate the contrary. Sadly mainstream Christianity seems to have elevated poverty to a virtuous quality, as a result.