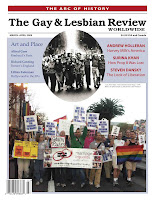 The latest issue of the Gay and Lesbian Review has the following intriguing little news snippet:


British Men Are from Venus

New figures released in the UK show that after three years with civil unions, which give same-sex couples equivalent status with straight ones, some 60,000 Britons have entered into such a union – and 75 percent of them are male couples. What’s curious is that in the U.S., a very different pattern has emerged in states where civil unions are allowed. Take Vermont, the first state to offer same-sex civil unions, where about two-thirds of the couples signing up have been women. No explanation seems ready at hand. An article in The Economist proposed that perhaps Britain has more gay men than lesbians, but it scarcely seems plausible that such a vast demographic difference would exist between the two countries. Clearly, some cultural effect is at work here – perhaps a different attitude toward the institution of marriage itself. What’s interesting is that the U.S. pattern is often held up as evidence that “women are from Venus” and instinctively pair-bonding, while men are naturally promiscuous and reluctant to settle down. Either the theory is wrong or British women are from Mars. 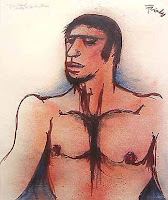 Also in the March-April 2009 issue of the Gay and Lesbian Review is Matthew Hays’ review of Ross Higgins’ book, Peter Flinsch: The Body in Question. Now I must admit that, by and large, Flinsch’s artistic style really doesn’t appeal to me. However, I did find the following from Hay’s review quite interesting, and do appreciate Flinsch’s portrait, at right, of Gros Louis, a “wrestler at the ‘Y’.” (Mmm . . . maybe it’s the sideburns!?).

[Flinsch’s] life story is simply astonishing. During World War II, he was recruited (as all young German men were) into the Nazi military. During a Christmas party in 1942, he was spied planting a kiss on another officer. That led to his being interrogated by Nazi police, submitting to a confession, and being placed in a Nazi prison for over a year during the war. During his detention, Flinsch was forced to openly state, in front of all the other inmates, that he was being imprisoned due to his homosexuality. Every morning he would make this crushingly humiliating announcement. But ironically, Flinsch now credits that experience with his audacity as an artist. In a sense, since that time Flinsch felt he had nothing left to lose. As Higgins notes, “Peter’s wartime arrest made his sexual identity paradoxically less problematic for him than for [other] men . . . who never had to confront it so brutally.”