.
Defenders of the pope attempt to shift blame
from Rome to Milwaukee. Do they have a valid point? 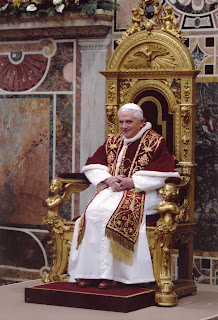 An article in Wednesday’s New York Times asserts that in the 1990s, Cardinal Joseph Ratzinger, now Pope Benedict XVI, failed to take action against a priest in Wisconsin, Lawrence Murphy, who was known to have sexually abused as many as 200 deaf boys. Since the publication of this claim, the Vatican and its defenders have been quick to both denounce it and offer their own version of events.

For instance, in an unsigned commentary in the Vatican daily L'Osservatore Romano, it’s stated that:

According to the reconstruction made in the [New York Times] article, based on ample documentation provided by lawyers for some of the victims, reports relating to the conduct of the priest were only sent in July 1996 by the then-archbishop of Milwaukee, Rembert G. Weakland, to the Congregation for the Doctrine of the Faith – its then prefect Cardinal Joseph Ratzinger and its secretary Archbishop Tarcisio Bertone – to the end of obtaining indications on the correct canonical procedure to follow. The request, in fact, referred not to the accusations of sexual abuse, but to a violation of the sacrament of penance, perpetrated by an enticement in the confessional, that takes place when a priest solicits a penitent to commit a sin against the sixth commandment (canon 1387).

Were Archbishop Weakland’s letters to the Vatican all about Murphy’s “violation of the sacrament of penance” and not Murphy’s long history of sexual abuse? As far as I know, neither the Vatican nor the New York Times have released the actual text of these letters. It’s hard to believe, however, that the Times would not get such a basic element of its story checked before going to press.

Meanwhile, in an article at CatholicCulture.org, Phil Lawler argues that what this story is really about is “the abject failure of the Milwaukee archdiocese to discipline a dangerous priest, and the tardy effort by Archbishop Weakland – who would soon become the subject of a major scandal himself – to shift responsibility to Rome.”

Lawler’s referencing of Weakland’s consensual affair with an adult male is reprehensible. What’s it got to do with this particular situation or issue? It seems to be just one more attempt to “blame the gays.”

But what of Lawler’s main argument, that blame for the Murphy case rests in Milwaukee, not in Rome? Given that I gave space yesterday to a commentary by Andrew Sullivan that was highly critical of the pope’s role in the burgeoning clergy sex abuse scandal, it seems only fair to share Phil Lawler’s perspective and the points he raises to support his argument. These points are as follows:

1. The allegations of abuse by Father Lawrence Murphy began in 1955 and continued in 1974, according to the Times account. The Vatican was first notified in 1996: 40 years after Church officials in Wisconsin were first made aware of the problem. Local Church leaders could have taken action in the 1950s. They didn’t.

2. The Vatican, following the standard procedures required by canon law, kept its own inquiries confidential. But the CDF never barred other investigations. Local Church officials could have given police all the information they had about the allegations against Murphy. Indeed they could have informed police 40 years earlier. They didn’t.

3. Milwaukee’s Archbishop Cousins could have suspended Father Murphy from priestly ministry in 1974, when he was evidently convinced that the priest was guilty of gross misconduct. He didn’t. Instead he transferred the predator priest to a new diocese, allowing him to continue pastoral work giving him access to other innocent young people. And as if that weren’t enough, later Archbishop Weakland made sure that there was no "paper trail." There was certainly a cover-up in this case. It was in Milwaukee, not in Rome.

4. Having called the Vatican’s attention to Murphy’s case, Archbishop Weakland apparently wanted an immediate response, and was unhappy that the CDF took 8 months to respond. But again, the Milwaukee archdiocese had waited decades to take this action. Because the Milwaukee archdiocese had waited so long to take action, the canonical statute of limitations had become an important factor in the Vatican's decision to advise against an ecclesiastical trial.

5. In a plea for mercy addressed to Cardinal Ratzinger, Father Murphy said that he had repented his misdeeds, was guilty of no recent misconduct, and was in failing health. Earlier this month Msgr. Charles Scicluna, the chief Vatican prosecutor in sex-abuse cases, explained that in many cases involving elderly or ailing priests, the CDF chooses to forego a full canonical trial, instead ordering the priest to remove himself from public ministry and devote his remaining days to penance and prayer. This was, in effect, the final result of the Vatican's inquiry in this case; Father Murphy died just months later.

6. The correspondence makes it clear that Archbishop Weakland took action not because he wanted to protect the public from an abusive priest, but because he wanted to avoid the huge public outcry that he predicted would emerge if Murphy was not disciplined. In 1996, when the archbishop made that prediction, the public outcry would - and should - have been focused on the Milwaukee archdiocese, if it had materialized. Now, 14 years later, a much more intense public outcry is focused on the Vatican. The anger is justifiable, but it is misdirected.

Actually, I think there’s enough anger and blame to go around to both Rome and Milwaukee.

Also, if for decades no one in Wisconsin took action against Lawrence Murphy (and no doubt other abusing clerics), doesn’t that say something about the culture of denial and secrecy throughout the entire Church on this issue? Has not this culture been set and maintained by the Vatican and successive popes? And is not such a corrupt culture the inevitable result of a dysfunctional clerical caste system - a system that, again, is vigorously championed and maintained by the papacy?

I welcome my readers’ thoughts and perspectives.

Also, for updates on this issue, check the News Links at The Progressive Catholic Voice.

The Times did release the texts of the letters and AB Weakland did focus on the solicitation issue. It should not be forgotten that it was this issue which put this case into the purview of the CDF--not the actual abuse of children. It was the violation of the Sacrament of Penance that counted.

For both the civil and canoncial investigations the statue of limitations had run out before the boys raised any issues. I imagine many clerics get on their knees in gratitude for statute of limitations clauses in Canon and civil law.

The stipulation for a 10 year statute of limitations in Ratzinger's 2001 directive was diabolically brilliant on his part given the length of time it takes abuse victims to come to enough terms with their experiences to report it. Someone at the CDF was at least current on this particular observation from existing clinical publications.

I heard an interview with Weakland in which he said that he wrote to Rome because many of the cases of abuse had to do with the rite of confession - not sure what that means, though.

I thought Andrew Sullivan's post that you mentioned was worth a read too, as well as a further one by him on the same subject.