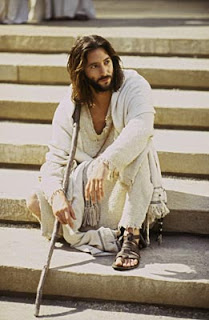 Continuing with The Wild Reed’s special Holy Week 2010 series, I share this evening a second excerpt from Andrew Harvey’s 1998 book, Son of Man: The Mystical Path to Christ.


What is surprising, as recent writers are starting to point out, is not how little we know about the historical Christ but how much. If we cannot always know exactly what he said and did, we can know the kinds of things he said and did. A profound synthesis is now emerging as to exactly who Christ was in his social and political context, and what kind of teacher he was. When this vision is absorbed into Christian practice it will revolutionize everything about Christianity. It will not destroy it, as scandalized conservative critics claim, but renovate and re-inspire it, in a way that, I believe, restores the full radical passion and revolutionary power of Christ’s real path – one that combines the deepest mystical absorption in the divine with the most absolute and selfless work for justice and compassion in the world.

In other words, the essential Christ – the mystical Christ, the one who dared not only see and know the divine and its love in full truth but also to act in every arena to see that that truth became real in its full subversive splendor – will come again to be the inspiration of those who take the Christ-path. Christ’s challenge to everyone – to enter into living communion with the Father-Mother, to pour out every skill and energy in a passion of adherence to the truths of that love and that fire in reality – will only grow in power as the courage, intelligence, and unstinting enactment of the sacred laws of unity and compassion of the historical Christ become ever-clearer.

Such clarity can only deepen the wonder of those who love Christ and increase the focus of their energies on the “actual” – on changing abusive relations of power and trying to realize the Kingdom on the earth. To follow Christ, the new vision of Christ makes clear, means to abandon all safeties and securities except those rooted in God, to subject not merely the self but also the world to ruthless analysis, to become clear about the deforming and betraying nature of power in all its forms, and to dedicate one’s life to standing for justice and compassion in an uncompassionate and unjust world. Without millions of beings willing to make such a leap into authentic love, how can the forces that are destroying nature be reversed, or a bearable and livable life for the billions of beings suffering from actual and psychic poverty be created?

Trying to create an alternative Kingdom of love in the night of Roman patriarchy, the man Jesus of Nazareth has everything to teach us now. We have a great deal to learn not only from his humility and fearlessness but also from his analysis of the divine life of the Kingdom and of the nature of the world and of how to overcome evil within it and represent the healing transforming powers of love. And we have everything to learn, too, from the mysterious and poignant passion of his life itself – the life that burned itself away in service to the truth of divine love and justice and the potential glory of human beings who lived in dynamic harmony with them both.


NEXT: One Symbolic Iconoclastic Act

See also the related posts:
Why Jesus is My Man
An Enlightened Exploration of Integrity and Obedience
Revisiting a Groovy Jesus (and a Dysfunctional Theology)
What We Can Learn from the Story of the Magi