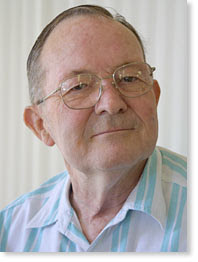 I have a lot of respect for scholar and author Chalmers Johnson, whom Steve Clemons describes as “one of the most successful chroniclers and critics of America’s foreign policy designs around the world” and as the “hard-right conservative” who became “one of the political left's greatest icons.”

Chalmers died this past Saturday at the age seventy-nine. Clemons, who knew Chalmers as a work colleague and friend, has written a heartfelt

tribute to Chalmers on his blog, The Washington Note. Following are excerpts.

Chalmers Johnson . . . rivals Henry Kissinger as the most significant intellectual force who has shaped and defined the fundamental boundaries and goal posts of US foreign policy in the modern era.

Johnson, who passed away Saturday afternoon at 79 years, invented and was the acknowledged godfather of the conceptualization of the “developmental state.” For the uninitiated, this means that Chalmers Johnson led the way in understanding the dynamics of how states manipulated their policy conditions and environments to speed up economic growth. In the neoliberal hive at the University of Chicago, Chalmers Johnson was an apostate and heretic in the field of political economy. Johnson challenged conventional wisdom with he and his many star students – including E.B. Keehn, David Arase, Marie Anchordoguy, Mark Tilton and others – writing the significant treatises documenting the growing prevalence of state-led industrial and trade and finance policy abroad, particularly in Asia.

Today, the notion of “State Capitalism” has become practically commonplace in discussing the newest and most significant features of the global economy. Chalmers Johnson invented this field and planted the intellectual roots of understanding that other nation states were not trying to converge with and follow the so-called American model.

. . . Johnson argued that there was no logic that existed any longer for the US to maintain a global network of [military] bases and to continue the occupation of other countries like Japan. Johnson noted that there were over 39 US military installations on Okinawa alone. The military industrial complex that Eisenhower had warned against had become a fixed reality in Johnson’s mind and essays after the Cold War ended.

In four powerful books, all written not in the corridors of power in New York or Washington – but in his small home office at Cardiff-by-the-Sea in California, Johnson became one of the most successful chroniclers and critics of America’s foreign policy designs around the world.

Before 9/11, Johnson wrote the book Blowback: The Costs and Consequences of American Empire. After the terrorist attacks in 2001 in New York and Washington, Blowback became the hottest book in the market. The publishers could not keep up with demand and it became the most difficult to get, most wanted book among those in national security topics.

He then wrote Sorrows of Empire: Militarism, Secrecy and the End of the Republic, Nemesis: The Last Days of the American Republic, and most recently Dismantling the Empire: America’s Last Best Hope. Johnson, who used to be a net assessments adviser to the CIA's Allen Dulles, had become such a critic of Washington and the national security establishment that this hard-right conservative had become adopted as one of the political left's greatest icons.

Johnson measured himself to some degree against the likes of Noam Chomsky and Gore Vidal – but in my mind, Johnson was the more serious, the most empirical, the most informed about the nooks and crannies of every political position as he had journeyed the length of the spectrum.

. . . Few intellectuals attain what might have been called many centuries ago the rank of “wizard” – an almost other worldly force who defied society’s and life’s rules and commanded an enormous following of acolytes and enemies.

Wizards don’t die – and I hope that those who read this, who knew him, or go on reading his works in the decades ahead provoke, inspire, jab, rebuke, applaud, and condemn in the way he did.

In one of my fondest memories of Chalmers and Sheila Johnson at their home with their then Russian blue cats, MITI and MOF, named after the two engines of Japan’s political economy – Chal railed against the journal, Foreign Affairs, which he saw as a clap trap of statist conventionalism. He decided he had had enough of the journal and of the organization that published it, the Council on Foreign Relations. So, Chalmers called the CFR and told the young lady on the phone to cancel his membership.

The lady said, “Professor Johnson, I’m sorry sir. No one cancels their membership in the Council in Foreign Relations. Membership is for life. People are canceled when they die.”

Chalmers Johnson, not missing a beat, said “Consider me dead.”

I never will. He is and was the intellectual giant of our times. Chalmers Johnson centuries from now will be seen, I think, as the intellectual titan of this past era, surpassing Kissinger in the breadth of seminal works that define what America was and could have been.


To read Steve Clemons’ tribute to Chalmers Johnson in its entirety, click here.