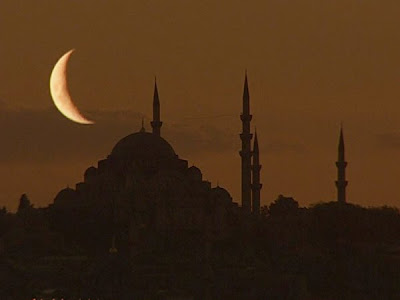 The Wild Reed’s series on Istanbul continues with excerpts from an insightful article by Christopher Hall on Mimar Sinan, the “Ottoman Michelangelo.” I came across this article in the September/October 2010 issue of the travel magazine Afar. 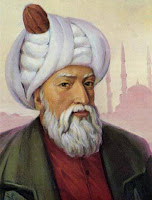 The Turkish architect Mimar Sinan, a contemporary of Michelangelo and Palladio, was responsible for the construction of more than 300 buildings – including mosques, palaces, public baths (hamams), mausoleums, bridges and aqueducts – in the 16th century, a time that is considered the golden age of the Ottoman Empire.

Mimar Koca Sinan Aga (ca 1497-1588) – usually shortened to Mimar Sinan (“Architect Sinan”) or simply Sinan – stands alone in the history of architecture. No other single designer has ever shaped a city as Sinan did Istanbul during his 50 years as chief royal architect for three Ottoman sultans. He created mosques, hamams, and schools for the 16th century’s most important world capital, building a legacy felt today by anyone who walks the city’s streets or sets foot inside one of his masterpieces. His domes are architectural tours de forces sheltering immense interiors of suffused light and deep shadow, According to Nobel-winning Turkish writer Orhan Pamuk, his mosques link the secular and the sacred, blending “monumental exteriors proclaiming the power of the Ottoman empire” with “pure inner spaces that draw the faithful into direct communion with God.” 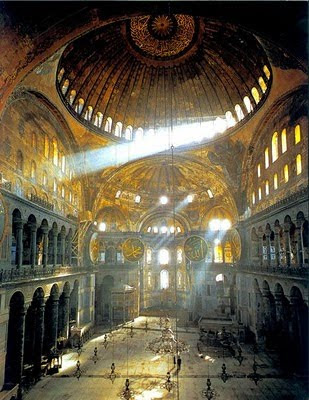 I had come to see Sinan’s Istanbul. More than a hundred of his buildings still exist in the city. Some are in ruins, others put to uses Sinan would never have imagined, a few gloriously restored. The buildings would give me a glimpse of Istanbul’s golden age as the capital of a vast, multicultural empire. But they also tell the tale of a modern megalopolis of 13 million Istanbullus, many newly arrived from poor regions of a secular republic that of late has seen a rise in Islamism. My journey would take me from the grandeur of imperial mosques to a once lovely hamam turned into a mini-mall, from the murky depths of Turkey’s still Byzantine bureaucracy to the thrilling heights of a slender minaret. I would meet the devout who pray in Sinan’s buildings; the shoppers who buy shoes in them; and the academics and restorers dedicated to making sure they endure. 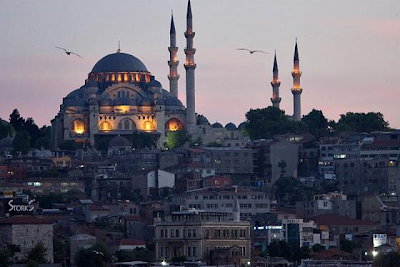 . . . Süleymaniye Mosque [above] . . . crowns the most prominent of old Istanbul’s seven hills. I smelled coffee and chiles as I passed the Spice Bazaar, a blur of almonds, figs, honeycomb, pastel pyramids of Turkish delight, and mountains of brick-red seasonings. I stopped for lunch of lamb-stuffed eggplant and pomegranate juice at a lokanta [a simple restaurant].

Afterward, I located Sinan’s tomb [right], an unadorned sarcophagus sheltered by a graceful stone vault, visible through an opening in the surrounding wall. An old man in a white crocheted skullcap and brown robe stood in front of the opening, eyes closed and palms held in prayer.

. . . The tomb felt forgotten in the bustle of the neighborhood, though I knew this was not always the case. In the 1930s, as Atatürk’s young republic forged its Turkish identity in the wake of purging itself of Armenians and Greeks, it became imperative to transform Sinan into a Turkish cultural hero. Somewhat inconveniently, Sinan was born to Christian parents who were likely Armenian, and he later became Muslim after being drafted into imperial service. Nevertheless, in 1935, to promote its racial theories, the Turkish Historical Society exhumed Sinan’s body and examined his skull, which was dutifully reported to be of the “brachycephalic Turkish race.” Even in today’s debates over Turkish identity, Sinan is claimed by all sides. Some see him as purely Turkish, others see him as purely Muslim, still others see him as being above politics and religion. His complicated biography, born of complex time, resists modern simplification. 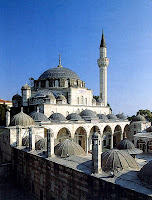 . . . I met Muzaffer Özgüles, a doctoral candidate in architectural history who pedals around the city on a mountain bike and is writing a book about the 10 mosques whose silhouettes dominate the skyline of old Istanbul. Together we visited Sokollu Mehmet Pasha Mosque [left] in Azapkapi, a small gem with eight semidomes radiating from the central dome. “I don’t think so much about religion when I am in one of Sinan’s mosques,” said Muzaffer. “To me, they are more like beautiful sculpture. Beautiful, rational sculpture designed by a man who may have worked for a Muslim sultan, but who was most importantly an Ottoman. Sometimes I wish I could have seen Istanbul when it was still a mix of Turks, Armenians, Greeks, and others. Sometimes I feel hüzün [a melancholy] not just for the ruined buildings of Istanbul but for all the different people who used to live here.”

I made several trips to Üsküdar, on the Asian side of the Bosporus, joining crowds that filed across gangplanks and onto ferries that belched black smoke. On a warm Sunday, I traveled by foot and jam-packed jitney to three mosques, a tomb, and Mimar Sinan Bazaar, a former hamam where natural light that once fell on bathers now illuminates women picking through mounds of cheap shoes and bras. Late in the day, tired, hot, and jangled by the masses, I found myself in the tea garden of Sinan’s Atik Valide Mosque. Men sat at shaded tables sipping, smoking, and quietly talking. A breeze moved through the trees and, closing my eyes, I felt it on my face. “Şerbet gibi,” I thought, remembering a Turkish phrase that describes a situation that is pleasant and sweet. “Like sherbet.”

Recommended Off-site Links:
Traces of a Genius in Istanbul
The Ottoman Architect Who Linked East and West

ı dont agree the purge part. He didnt want to vanish non muslim population of turkey... many of them migrated or died in the wars most important artists etc. after 30s nobody was around