Across America, "the Giant is Awake" 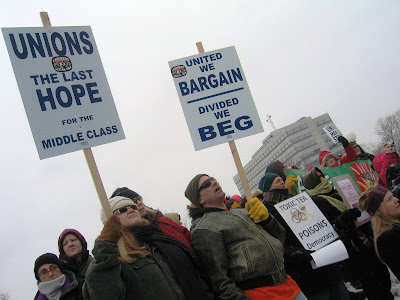 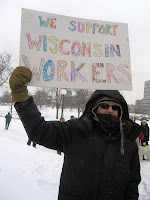 At noon today I participated in a rally in St. Paul that was just one of hundreds across the U.S. held in solidarity with workers in Wisconsin.

As I'm sure you know, Wisconsin public workers, their families and supporters are holding steady at the Wisconsin Capitol in Madison in their fight against Republican-backed legislation aimed at weakening unions.

Of course, that's just the surface issue. For as more than one speaker observed at today's rally in St. Paul, what's also under attack is the middle class – the 98% of Americans who are not the super-rich. Economist and New York Times columnist Paul Krugman puts it this way:

What [Wisconsin Governor Scott] Walker and his backers are trying to do is to make Wisconsin — and eventually, America — less of a functioning democracy and more of a third-world-style oligarchy. And that’s why anyone who believes that we need some counterweight to the political power of big money should be on the demonstrators’ side.

And it seems more and more Americans are!

In Madison, something like 70,000 people gathered at the State Capitol. The crowd at the Minnesota Capitol in St. Paul numbered around 2,500.

In acknowledging the number of pro-worker rights rallies being held across the nation today, one speaker in St. Paul noted how all across America "the giant is awake." Indeed!

Following are photos I took at today's rally at the Minnesota State Capitol. They're accompanied by a commentary by Ralph Nader, "'Mad as Hell' in Madison," that was first published at CommonDreams.org. Perhaps after today it should be entitled: "'Mad as Hell' Across the U.S"! 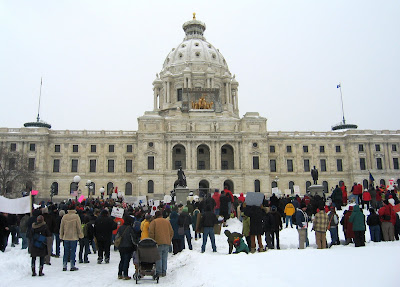 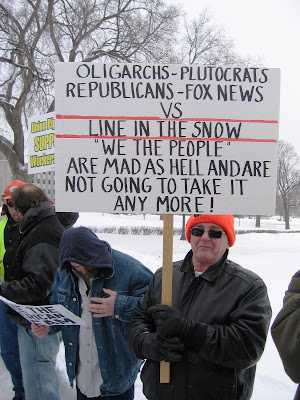 "Mad as Hell" in Madison

The large demonstrations at the state Capitol in Madison, Wisconsin are driven by a middle class awakening to the spectre of its destruction by the corporate reactionaries and their toady Governor Scott Walker.

For years the middle class has watched the plutocrats stomp on the poor while listening to the two parties regale the great middle class, but never mentioning the tens of millions of poor Americans. And for years, the middle class was shrinking due significantly to corporate globalization shipping good-paying jobs overseas to repressive dictatorships like China. It took Governor Walker’s legislative proposal to do away with most collective bargaining rights for most public employee unions to jolt people to hit the streets.

Republicans take rigged elections awash in corporatist campaign cash seriously. When they win, they aggressively move their corporate agenda, unlike the wishy-washy Democrats who flutter weakly after a victory. Republicans mean business. A ram rod wins against a straw all the time. 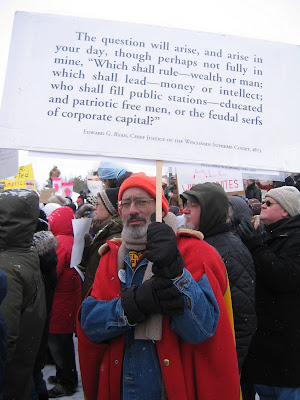 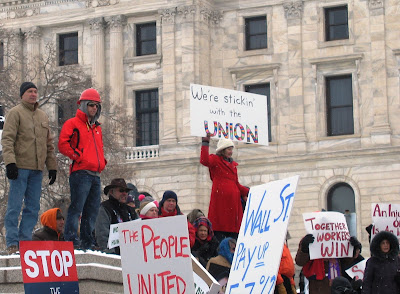 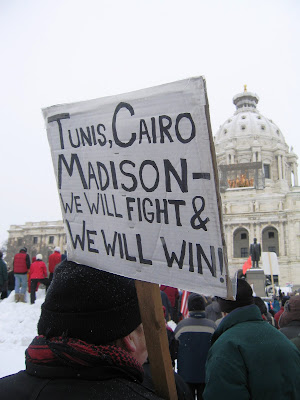 Governor Walker won his election, along with other Republicans in Wisconsin, on mass-media driven Tea Party rhetoric. His platform was deceitful enough to get the endorsement of the police, and firefighters unions, which the latter have now indignantly withdrawn.

These unions should have known better. The Walker Republicans were following the Reagan playbook. The air traffic controllers union endorsed Reagan in 1980. The next year he fired 12,000 of them during a labor dispute. (This made flying unnecessarily dangerous.)

Then Reagan pushed for tax cuts—primarily for the wealthy—which led to larger deficits to turn the screws on programs benefiting the people. Reagan, though years earlier opposed to corporate welfare, not only maintained these taxpayer subsidies but created a government deficit, over eight years, that was double that of all the accumulated deficits from George Washington to Jimmy Carter.

Maybe the unions that endorsed Walker will soon realize that not even being a “Reagan Democrat” will save them from being losers under the boot of the corporate supremacists. 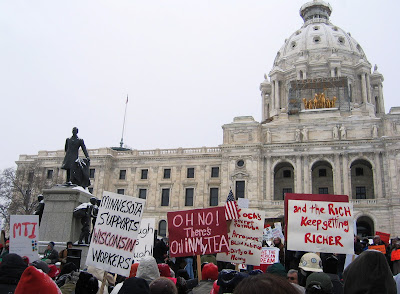 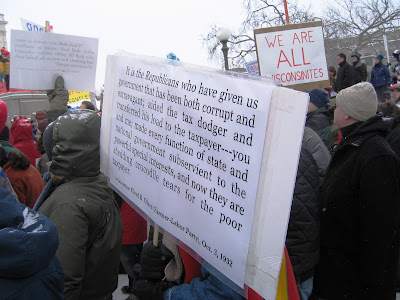 The rumble of the people in Madison illustrates the following:

1. There is an ideological plan driving these corporatists. They create “useful crisis” and then hammer the unorganized people to benefit the wealthy classes. Governor Walker last year gave $140 million in tax breaks to corporations. This fiscal year's deficit is $137 million. Note this oft-repeated dynamic. President Obama caved to the Minority party Republicans in Congress last December by going along with the deficit-deepening extension of the huge dollar volume tax cuts for the rich. Now the Republicans want drastic cuts in programs that help the poor.

2. Whatever non-union or private union workers, who are giving ground or losing jobs, think of the sometimes better pay and benefits of unionized public employees, they need to close ranks without giving up their opposition to government waste. For corporate lobbyists and their corporate governments are going after all collective bargaining rights for all workers and they want to further weaken The National Labor Relations Board.

3. Whenever corporations and government want to cut workers’ incomes, the corporate tax abatements, bloated contracts, handouts and bailouts should be pulled into the public debate. What should go first?

4. For the public university students in these rallies, they might ponder their own tuition bills and high interest loans, compared to students in Western Europe, and question why they have to bear the burden of massive corporate welfare payouts — food stamps for the rich. What should go first?

6. The mega-billionaire Koch brothers are in the news. They are bankrolling politicians and rump advocacy groups and funding media campaigns in Wisconsin and all over the country. Koch Industries designs and builds facilities for the natural gas industry. Neither the company nor the brothers like the publicity they deserve to get every time their role is exposed. Always put the spotlight on the backroom boys.

7. Focusing on the larger struggle between the people and the plutocracy should be part and parcel of every march, demonstration or any other kind of mass mobilization. The signs at the Madison rallies make the point, to wit—“2/3 of Wisconsin Corporations Pay No Taxes,” “Why Should Public Workers Pay For Wall Street’s Mess?”, “Corporate Greed Did the Deed.”

8. Look how little energy it took for these tens of thousands of people to sound the national alarm for hard-pressed Americans. Just showing up is democracy’s barn raiser. This should persuade people that a big start for a better America can begin with a little effort and a well-attended rally. Imagine what even more civic energy could produce!

Showing up lets people feel their potential power to subordinate corporatism to the sovereignty of the people. After all, the Constitution’s preamble begins with “We the People,” not “We the Corporations.” In fact, the founders never put the word “corporation” or “company” in our constitution which was designed for real people.

As for Governor Walker’s projected two-year $3.6 billion deficit, read what Jon Peacock of the respected nonprofit Wisconsin Budget Project writes at WisconsinBudgetProject.org about how to handle the state budget without adopting the draconian measures now before the legislature. 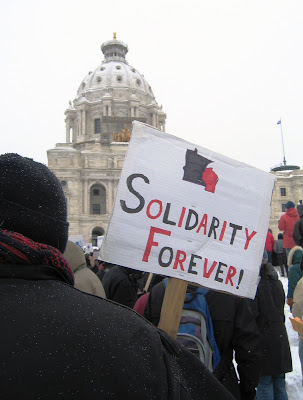 See also the previous Wild Reed posts:
At the Minnesota Capitol, a Show of Support for Workers' Rights in Wisconsin and Beyond
Buffy Sainte-Marie: Singing It and Praying It; Living It and Saying It