The Archangel Raphael – Patron Saint for Those Seeking Their Soul Mate 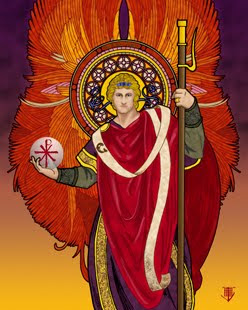 Thanks to Colleen over at Enlightened Catholicism, I've been introduced to the 2009 article reprinted below that's all about St. Raphael.

good friend named Raphael and having always been intrigued by the notion of angels, I found this article to be a very interesting and entertaining piece. Its title, however, is misleading. St. Valentine can still be rightly associated with love. He apparently is just not the patron saint for finding love or, in other words, one's soul mate. That's Raphael's job!

Anyway, perhaps you'll find this article just as interesting. Oh, and for Colleen's insightful reflections on it, click here.

St. Valentine "Not Saint of Love" 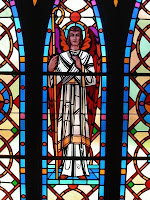 Britain's Roman Catholic Church is advising lovelorn singles to direct their February 14 requests for love to St Raphael, rather than St Valentine.

Over the years St Valentine has come incorrectly to be associated with finding love, the Church says.

He is the patron saint for those who have already found their soul mate.

St Raphael is the patron saint for happy encounters and it is to him those fearing the Valentine's post should properly direct their prayers.

Clare Ward, spokeswoman for the Catholic Enquiry Office, the official body providing information on Catholic life, said that while the distinction between the saints has always been clear within the Church it has, over the years, been blurred outside.

"Saint Valentine passed a note to his jailer's daughter, whose sight he is thought to have cured," she said.

"The note had no romantic content, but it's from this story that the tradition of sending notes of appreciation has come from.

"If tomorrow you are still looking for your soul mate, the actual patron saint is St Raphael.

"He's the person you should dedicate your day or pray to if you are looking for Mr or Mrs right."

St Raphael, according to legend, helped Tobias enter into marriage with Sarah, who had seen seven previous bridegrooms perish on the eve of their weddings.

It is he within the canon of Catholic saints who is properly associated with helping to forge partnerships.

St Valentine is said to have been martyred in Rome in 269.

While his exact history is unclear, Valentine is thought to have existed as archaeologists have unearthed an early church dedicated to someone of that name.

One theory is that he was a priest in Rome who continued to marry Christian couples in defiance of the law of the day.

On the eve of his execution, he is said to have signed a note to his jailer's daughter: "From your Valentine."

Those hoping for divine intervention to help their love lives may well appreciate the correction in target for their prayers, but Miss Ward also had some more advice.

"There is a lot of evidence to suggest that young people who have tapped into prayer groups have found partners," she said.

"Those who have exhausted traditional routes like online dating should try spiritual networks.

"Why not come along to a prayer group – it could be your lucky night."