Arriving back in the Twin Cities on Monday evening meant that I missed the “Creating Change” conference that took place in Minneapolis this past weekend. Organized by the National Gay and Lesbian Task Force, it was, by all accounts, a very successful event – with something like 2,500 to 3,000 people in attendance from all around the country.

My friend Ken saved an article from last Friday’s Star Tribune for me about the conference. Written by Randy Furst, this particular article focuses on the LGBT representatives from various racial and religious minorities who participated in the conference. One of these people was my friend Alfonso Wenker.

Alfonso is a young gay Latino man and one of the co-chairs of the “Creating Change” conference. I first met him back in April of 2007 when he invited representatives from CPCSM to the inaugural Minnesota GLBTA Campus Alliance Spring Dinner at the University of St. Thomas. More recently, Alfonso and his dad were speakers at a CPCSM co-sponsored rally that saw over 300 people gather for a rousing and very Catholic show of support for marriage equality. Yes, the guy’s a real inspiration to all of us working for justice and social change.

Below (with added links) is Randy Furst’s informative and, to my mind, hopeful article about Alfonso and a number of other racial and religious minority group members who had prominent roles in last weekend’s “Creating Change” conference. (Note: The photos that accompany this article are by Star Tribune photographer Jerry Holt).

Gay Minorities are Organizing
Racial and religious minorities are active
in the GLBT movement as they bid for acceptance. 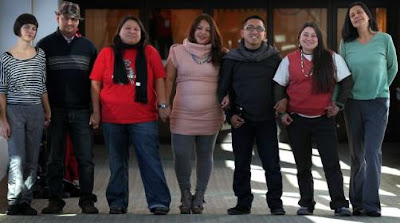 Kevin Xiong of St. Paul helped found the first and only organization in the world of Hmong gay, lesbian bisexual and transgender people.

They are among a large group of racial and ethnic minorities with prominent roles in a national GLBT conference in Minneapolis this week. The “Creating Change” conference has attracted 2,500 to 3,000 people from throughout the country.

Traditionally hidden and often marginalized within their own cultures, GLBT minorities are becoming more organized and are working to gain greater acceptance, leaders say. The minorities include Indians, Hispanics and blacks. There will be Muslim prayers and a Jewish Shabat service on Friday.

“In our LGBT community, we have always said we are everywhere,” said Sue Hyde, the conference director. “But we have not always organized everywhere we live, and that is changing.”

For most GLBT minorities, gaining acceptance in their own culture is a challenge. “Communities of color still face homophobia at a higher rate than the white community,” said Roxanne Anderson of Minneapolis, a former officer of Twin Cities Black Pride.

In 2008, Xiong [left] helped formally launch in the Twin Cities a Hmong GLBT organization called Shades of Yellow. It has about 30 members. “The culture doesn’t accept it,” said Xiong, a conference co-chair. “There is not even a word for being gay and lesbian in the Hmong language.”

Harvey Zuckman of Minneapolis is coordinating the Shabat service, to be conducted by three GLBT rabbis. He said he and his partner got together in 1975 but struggled to find a local congregation that would recognize their relationship on an equal footing with heterosexuals. He said that today many local congregations accept same-sex couples.

Alfonso Wenker [right] of Minneapolis, a Latino and a conference co-chair, said recognition of same-sex couples is a big issue for GLBT immigrants, including undocumented workers and visiting students whose visas have expired.

He said federal law and thus immigration officials do not recognize same-sex marriage. So an American GLBT person who is a citizen or permanent resident cannot sponsor an immigrant partner to stay in the United States. A bill in Congress, the Uniting American Families Act, would make such sponsorship possible, he said.

Faisal Alam [left] is a gay Muslim of Pakistani descent and founder of Al-Fatiha, an organization for GLBT Muslims and their allies. A keynote speaker at the conference, he said his group has 3,000 members with nine chapters in the United States and sister organizations in other countries. It has no chapters in Minnesota but has members here.

“There are only a handful of people in the whole country who are out and gay and Muslim,” Alam said.

Coya Artichoker of Minneapolis, an American Indian, belongs to Two Spirit First Nations Collective. “Two spirit is a contemporary term,” she explained. It refers to “first nation,” or indigenous people, who are GLBT, she said, adding that it evolved from traditions in which individuals had a masculine and feminine spirit. She said the group seeks to bring issues of Indian sovereignty to the larger GLBT community.

Chrystos, an American Indian poet and lesbian from Tacoma, Wash., is another conference speaker. She said she is concerned about gay Indian children who are isolated and committing suicide on reservations. “Being a young Indian person is very difficult any place,” she said. “The welcome mat is not exactly out for us in the United States.”

See also the previous Wild Reed posts:
Coming Out in Africa and the Middle East
Homosexual Relations Decriminalized in India
In Uganda, a “Fearless Voice” for Gay Rights is Brutally Silenced
The Scourge of Homophobia in Economically Impoverished Countries
To Be Gay in Iraq
The Blood-Soaked Thread
The Vatican’s Actions at the UN: “Sickening, Depraved and Shameless”