It's Maundy Thursday and The Wild Reed's special Holy Week series continues with a third excerpt from Cynthia Bourgeault's The Wisdom Jesus: Transforming Heart and Mind – A New Perspective on Christ and His Message . (For the first installment of this series, click here.) Tonight's excerpt, appropriately enough, examines the two disciples of Jesus who "have gone down in history as the great betrayers: Judas and Peter."
_____________________________ 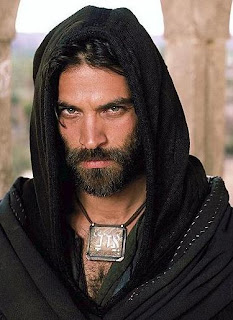 Judas' crime is the more serious and [of he and Peter] he is the more psychologically complex. According to scriptural tradition, Judas was a Zealot (which means that he belonged to a political movement that was essentially the Zionism of its time). Thus, his interest in Jesus was at least in part politically motivated. Judas saw in Jesus the long-awaited Messiah, the earthly king who would return the nation of Israel to the glory of its former days. Jesus was his hero, and like all hero-worshipers, Judas projected onto Jesus his own agenda – and his own personal power. In the end what motivated his betrayal was most likely a broken heart: too much love and too much disappointment.Don't we all do this all the time to our own respective messiahs, our gurus and teachers? We set them up on a pedestal, and when they fail to carry our expectations, we tear them down, taking out a pound of their flesh and a pound of our own as well.

In Judas' case, I believe the chief operative is despair at having hoped so much, having invested so much of himself, and then experiencing his hopes dashed. What the triggering incident may have been we are not told, but like any heartbroken lover he retaliates with a desperate violence that ultimately turns self-destructive.[And then] there is Peter, whose dilemma is much more straightforward. With Peter it's always pretty much "what you see is what you get," and what we see here is mostly plain old cowardice, a massive failure of nerve when the crisis finally overtakes them. Throughout the gospels he has repeatedly demonstrated his lack of self-knowledge, culminating in that granddaddy of all howlers on the eve of the crucifixion when he announces in complete sincerity, "Lord, I am ready to give my life for you" (John 13:37). But when push actually comes to shove, he finds himself fleeing in total disarray; it is simply too dangerous to be associated with that Jesus fellow any more. 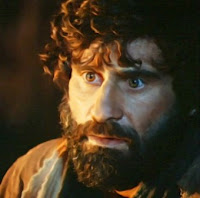 In a telling vignette (exactly predicted by Jesus), as he huddles in the chilly first light of day warming himself beside the last coals of a dying fire, three times Peter is asked if he is one of Jesus' disciples; each time he answers, "I am not." This seemingly harmless negation actually contains a subtle existential pun. Throughout this gospel Jesus has constantly identified himself with the power of "I am" in a series of sayings ("I am the shepherd," "I am the door," "I am the vine," "I am at your heart's door knocking," "I am in you and you in me," and so forth) which are on one level simply a grammatical formula but on another level the direct invocation of the name of God, Yahweh or "I AM." In doing so, Jesus has identified himself with being itself, and in denying his master, Peter simultaneously consigns himself to non-being: "I am not." But his genuine remorse once he realizes what he has done earns him his place in the passion narrative and in our hearts. Cowardly and confused though he may be, he is at least able to demonstrate that no mistake is beyond repair if it is honestly confessed and sincerely repented.

NEXT: No Deeper Darkness

Images 1-2: Johnathon Schaech as Judas and Jonathan Scarfe as Jesus in the 2004 film Judas.Image 3: James Farentino as Peter in the 1977 television mini-series Jesus of Nazareth.