Palm Sunday at the Chancery 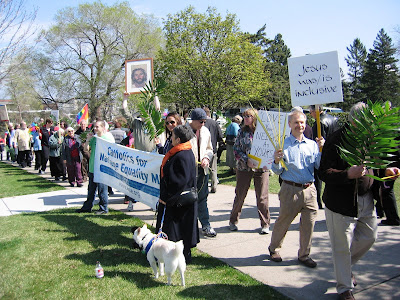 You might remember that I recently shared a link to a post at Sensus Fidelium, the blog of Catholics for Marriage Equality MN. This particular post featured images of C4ME-MN's series of Lenten prayer vigils that took place in front of the chancery offices of the Archdiocese of St. Paul-Minneapolis. The primary purpose of the vigils was to bring together Catholics and other people of good will to pray for Archbishop Nienstedt. Specifically, we pray that he may choose to redirect his energies and the financial resources of the Archdiocese away from the divisive ‘marriage amendment’ and toward actions that reflect Jesus' Gospel call to care for the poor and marginalized.

Anyway, yesterday on Palm Sunday over 250 people gathered for the last of our Lenten vigils. I've updated the Sensus Fidelium post documenting the entire series with photos I took yesterday, but I also thought I'd share some of these photos here today at The Wild Reed. Enjoy! 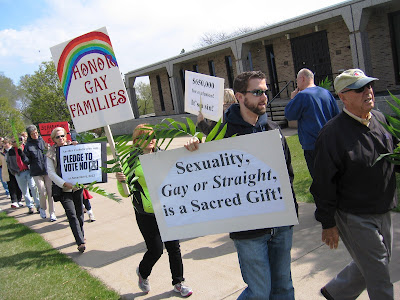 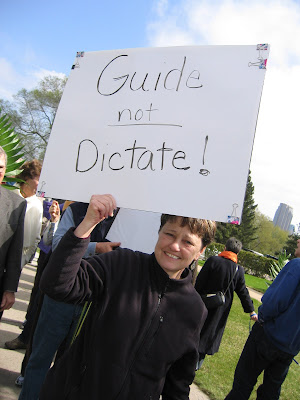 Above: A pointed message to the bishops! 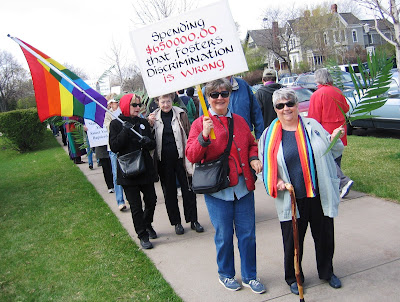 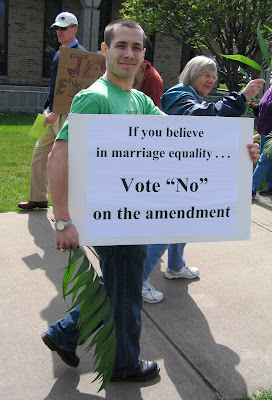 Above: My friend Phil, who, along with members of his family,has been a regular attendee of the Lenten prayer vigils. 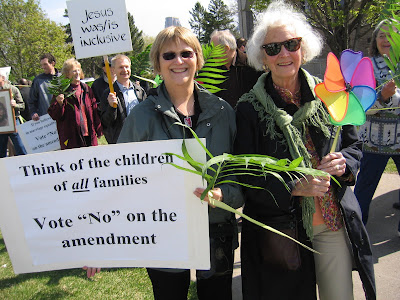 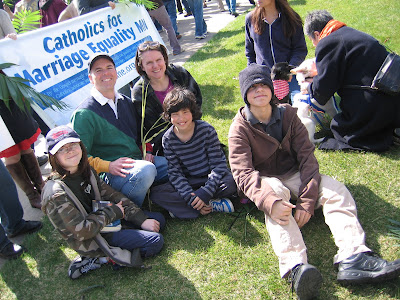 Above: My friends John and Kathy with their
three boys Aaron, Cole and Noah. 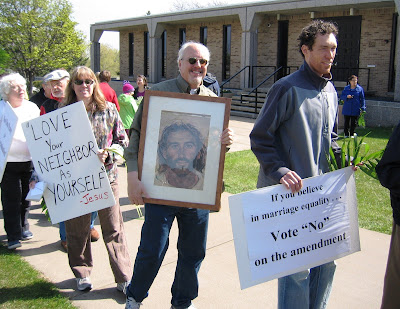 Above: Friends and fellow C4ME-MN board members Lisa and Brent Vanderlinden. The couple feature in the DVD Catholics for Marriage Equality. At right is my friend and house-mate Tim. Like my friend Phil and his family, Tim has been a stalwart supporter of the Lenten vigils. 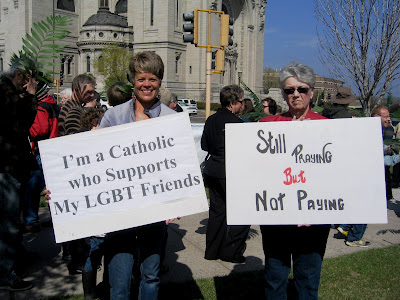 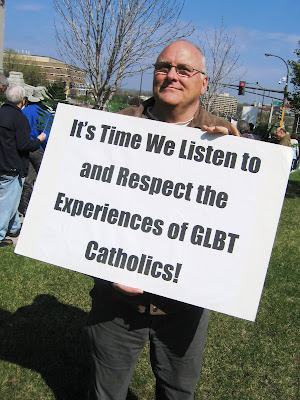 My friend Tom's sign (above) reminds me of how Jesus, on that first Palm Sunday, wept over Jerusalem. He wept because he knew that most of the citizens of the city failed to recognize him for who he really was – not a warrior-king who would lead a violent rebellion against the oppressive Romans, but a humble teacher of compassion and wisdom whose words and actions modeled a way of being connected to God, self and others that is truly liberating. In a similar way, many Catholics lament the hierarchy's failure to recognize lesbian, gay, bisexual and transgender (LGBT) people, their lives and their relationships for what they really are. Indeed, over and over again, the hierarchy's ignorant and hurtful words and actions mock and crucify Christ within such lives and relationships. Christ, God's expression of compassion and justice, is truly capable of being embodied in the lives and relationships of LGBT people. Accordingly, we need to lovingly listen to and respect their experiences as by doing so, we are given a beautiful opportunity to listen for and respond to the liberating presence of Christ. It disturbs me that anyone who professes to follow Christ would deny such an opportunity and the expansion in consciousness, compassion and justice it is capable of facilitating in our lives, our church, and our world.

Best wishes from Colorado!
Please keep up the "good fight" in MN. Don't accept anything less than full equality. Here in CO some are ready to accept "civil unions"... Bad idea! My humble opinion.