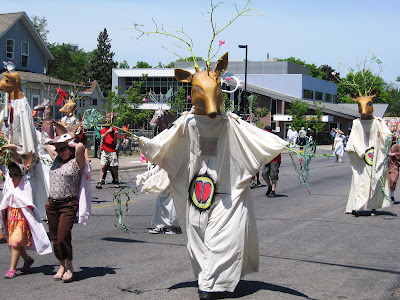 This was the theme of In the Heart of the Beast Puppet and Mask Theatre's 38th Annual MayDay Parade in Minneapolis.

Given that I was in Australia for the last week of April and the first week of May (see here, here and here), I was resigned to the fact that I would miss this year's parade. This was particularly disappointing as I'd missed last year's parade due to the filming of Catholics for Marriage Equality MN's series of "video vignettes." Yet due to weather conditions, this year's parade was postponed to May 13, the Sunday after I returned to Minnesota!


I appreciate and enjoy the Mayday Parade as I always find it an inspiring and hope-filled event. Indeed, in many ways I see it as a spiritual event. For instance, the parade always tells a story, one that depicts a journey from unknowing, chaos and destruction to integration, community and enlightenment. Spirituality, at its heart, is about transformation. And so journeys like this and their creative retelling are very much expressions of spirituality; are very much living, interactive sacred texts.

About this year's parade theme the MayDay Festival guidebook notes:

This year we celebrate the local and international groundswell of people turning away from entanglement with exploitive systems towards healthy communities with sustainable visions of the future. There is no one right way to do this – transition involves difficult and honest discussions, inner soulful wrestling, outward action, many ideas and many hands, and ultimately, the unleashing of much joy and abiding love.

This "unleashing of much joy and abiding love" was evident on the streets of South Minneapolis on May 13. I'm so glad I had the chance to witness it – and to document it in the photos that accompany this post. As in previous years, I spent time before the parade began at its staging area, capturing some wonderful images of people – young and old – as they prepared to be part of what's become a world-famous event. 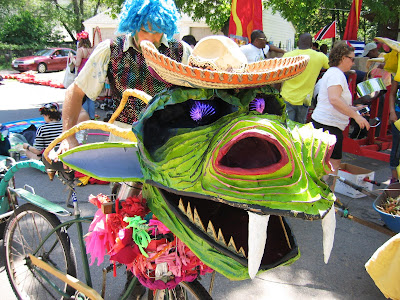 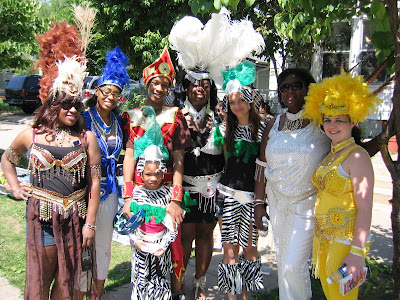 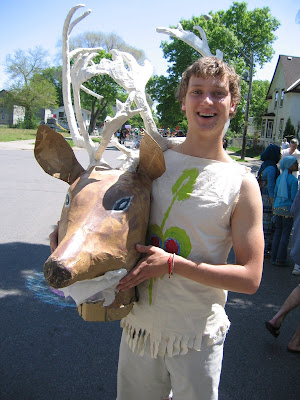 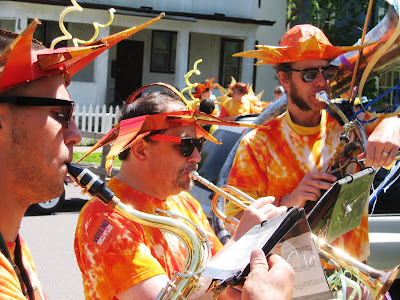 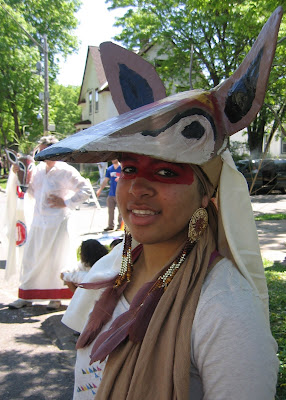 Why puppets and masks? An excerpt from this year's MayDay Festival guide explains:

Puppetry's power lies in the act of transformation – of bringing something inanimate to life. This act in itself speaks to our lives, which rise and fall and rise again. As we share this act of building and performing, we find that art brings people together. It creates and expands community. 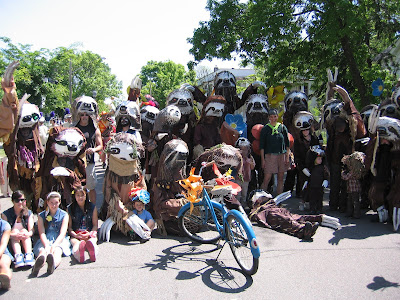 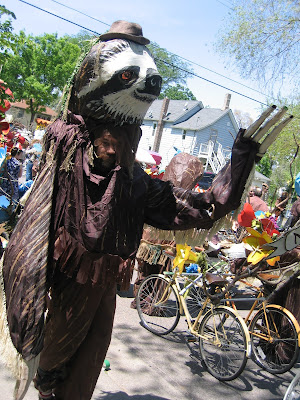 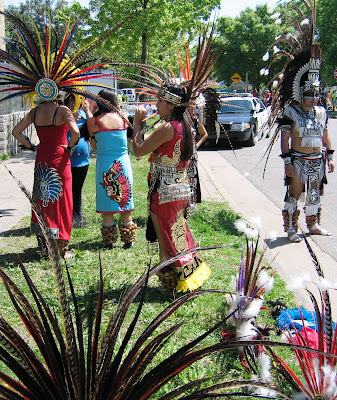 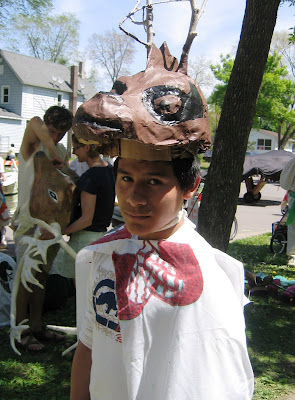 Following are images of the parade, accompanied by excerpts from the parade guide. Enjoy! 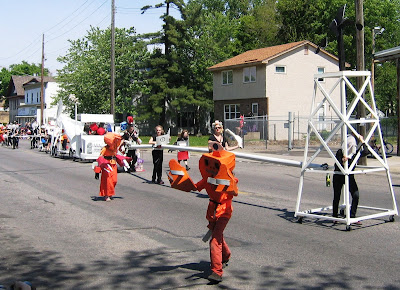 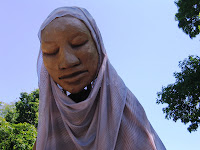 Connected by the Energy Pipeline, yet isolated, ordinary people just like you, use objects and services derived from fossil fuels. . . . Running about the pipeline are energy gremlins with their wall socket faces and pronged tails, making sure that everyone stays plugged in.

The Energy Pipeline pierces the heart of Mother Earth. Our habits of energy consumption drain her resources and deplete her lifeforce, bleeding her dry. When we contribute to her suffering, we create our own suffering because we too are part of the earth. 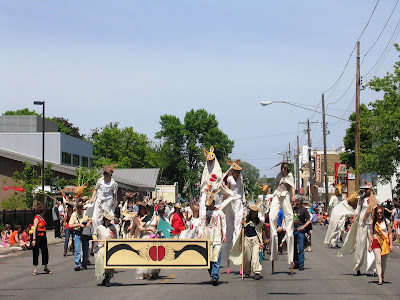 Our wild Deer Hearts guide us to a new dawn, urging us to break and fall awake. They divine a way to rebirth ourselves. They whirl in prayer, revolving around an open heart, just as the earth revolves around the sun. Their limbs branch out to receive the truth and love of the cosmos, yet are firmly rooted in relation to the earth. . . . The first people to wake up and to break through become Deer Spirits to purify and protect the path. They give out a new form of energy and currency, based on unconditional giving and loving. 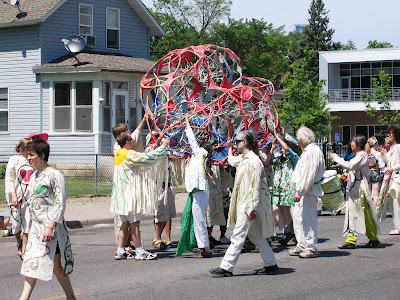 The Earth's Heart is OURS. Enter the sleeping heart. Much of our time is spent trapped in cars, on the computer, or in a cubicle. We are tired and damaged, and we live in a world that is tired and damaged. We have passed a natural balance, and very little stands between us and destruction.

We have lost touch with our wild nature, our center of creativity, energy and life. Some ancestors believed the heart to be the center of intelligence, the universe, and the sun. We can use our hearts to bring change and follow our intuition into our wild, loving and sacred center. This heart cannot break; earth's wild heart is aware, holding all things together. Shake it! Awaken! 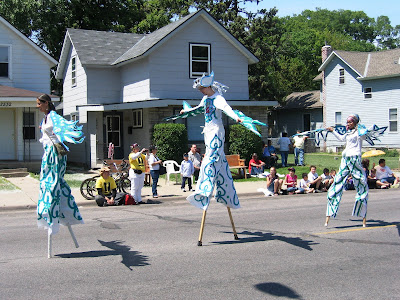 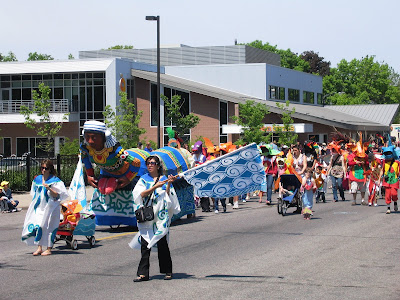 Chalchiutlicue, the water goddess, reigned in the Fourth Sun Era with kindness to humans. The other gods became jealous and accused Chalchiutlicue of faking her compassion. Tears flowed from the eyes of Chalchiuhlicue, causing a great flood that threatened the existence of the human race. In a genuine act of compassion, Chalchiutlicue turned humans into fish to save them. As a sign of the covenant, on the bank of the river, grew a prickly pear cactus laden with fruit, symbolizing the human heart.

Genuine compassion is the source of change and comes only with sacrifice of the ego. When a transition happens in one's innermost being, it becomes visible: a sweet, vital fruit of generosity. Transition, now. 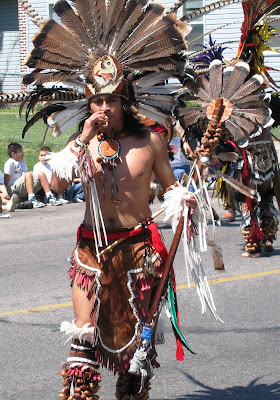 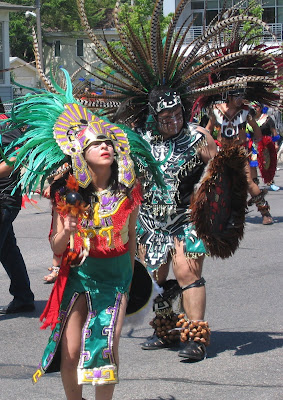 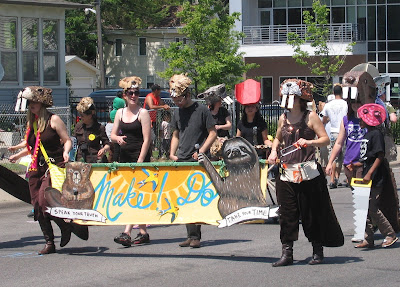 The resourceful beaver works diligently to create an environment where it and its fellow creatures are able to flourish. Because they live cooperatively, these beavers are sharing tools. 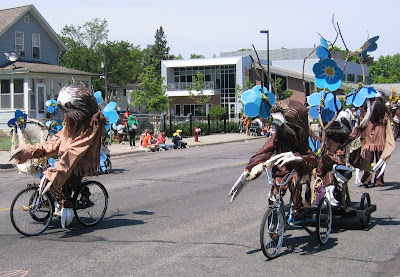 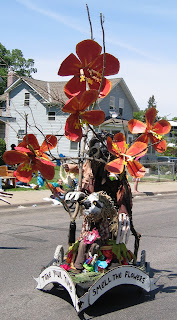 Sloths on bicycles! Sloths are extremely slow-moving beasts. They are so slow that algae grows in their fur. Our ability and desire to move quickly make it hard for us to participate in the slower, subtler things around us. The brigade of sloth cyclists is declaring: "Take your time! Make the time!" 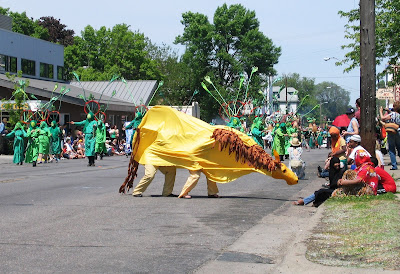 Four horses – White, Red, Yellow and Black – gather from the four directions – North, South, East and West – to bring the medicine of unity and the prophetic message of The Forest. 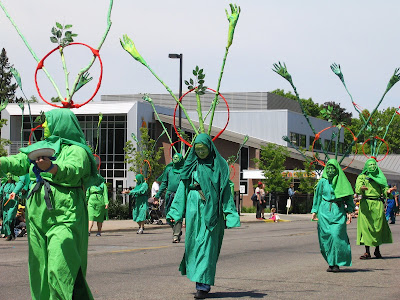 The Forest has a memory recorded in rings of ancient growth. This year marks the 150th anniversary of the largest mass execution in American history, the hanging of 38 Dakota men in Mankato, MN, and the subsequent removal of Dakota people from the state of Minnesota. In commemoration, 38 trees reach ever up, their roots planted forever into the memory of our earth to honor the wisdom and the people that continue to grow. 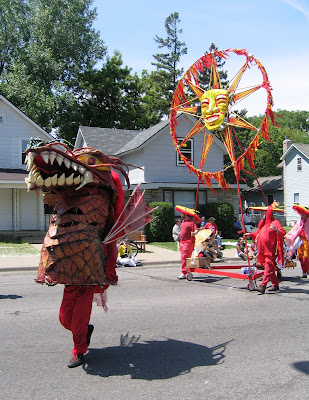 The Sun calls us to move, to grow, to reach upward for what is possible. It is constant and seemingly eternal as we move in our inextricable cycles around it. Nowhere is it more revelatory than in Spring when life, long dormant, reaches upward.