Meanwhile, Back in Minnesota . . . 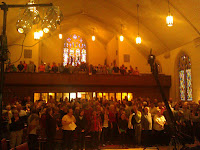 I'm happy to report, however, that my friend and fellow C4ME-MN board member Jim Smith has posted an informative and powerful piece about this very special gathering of Catholics on Sensus Fidelium, the blogsite of C4ME-MN. Here's part of what Jim shared . . .

It was an incredible experience, thanks to a church full of impassioned Catholics and friends from several other denominations, and thanks to a powerful song, "For All the Children," by composer David Lohman. With cameras rolling, this intentional community sang its heart out for the full inclusion of God's LGBTQ children and for the defeat of a hurtful anti-marriage amendment on Minnesota's ballot in November. Why film this moment? We wanted to provide a sacred visual and audio witness to the fact that many Catholics respectfully – and boldly – disagree with the Minnesota bishops' efforts to support this amendment. We wanted to show, in the context of a profoundly inclusive hymn, that many Catholics reasonably and instinctively support our gay and lesbian brothers and sisters to enter into loving and committed relationships not to be demeaned by our society. We wanted to be clear that by virtue of our baptism, Catholics are called to follow the dictate of their informed personal consciences, even when that means differing with our leaders on issues.

To read Jim's report in its entirety, click here.