An Afternoon on the Harbour 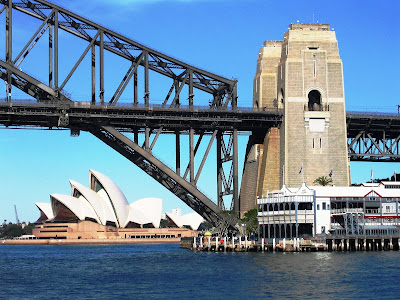 As perhaps you gathered from my most recent Photo of the Day, I spent part of last Sunday, May 6, on Sydney Harbour. I'm back in Minnesota now but thought I'd take this opportunity to share a few more images of that memorable afternoon.

I should say that, strictly speaking, these images are of Port Jackson, the natural harbour of Sydney and an inlet of the South Pacific Ocean. Port Jackson contains several smaller harbours and bays, including Darling Harbour, Sydney Harbour and Sydney Cove (home of Circular Quay). Islands within Port Jackson include Shark Island, Fort Denison, Goat Island and Cockatoo Island. Port Jackson is widely considered to be one of the world's finest harbours, and was the location of the first European settlement in Australia.

Left: I experienced the sights of Sydney Harbour with my Mum and Dad, who had traveled down to Sydney from Port Macquarie the day before. I'd been in Sydney for just over a week, spending time with the McGowan family. 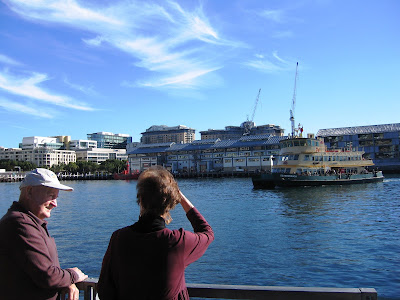 Above: After catching a bus to Darling Harbour from Royal Prince Alfred Hospital in the inner city suburb of Camperdown, my parents and I caught the Scarborough ferry to Circular Quay via Balmain East and Milsons Point. 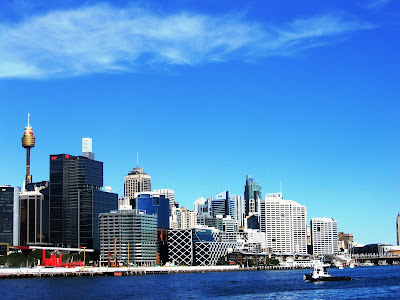 Above: The view of the central business district (CBD) of Sydney from Darling Harbour. The tall structure at left is the Sydney Tower. 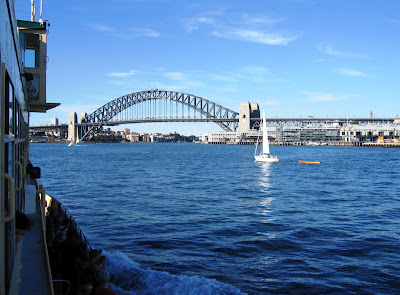 Above: The iconic Sydney Harbour Bridge which earlier this year celebrated its 80th birthday!

The Sydney Harbour Bridge is a steel through arch bridge across Sydney Harbour that carries rail, vehicular, bicycle and pedestrian traffic between the Sydney central business district (CBD) and the North Shore. The dramatic view of the bridge, the harbour, and the nearby Sydney Opera House is an iconic image of both Sydney and Australia. The bridge is nicknamed "The Coathanger" because of its arch-based design.

Under the directions of Dr J.J.C. Bradfield of the NSW Department of Public Works, the bridge was designed and built by British firm Dorman Long and Co Ltd of Middlesbrough and opened in 1932. The bridge's design was influenced by the Hell Gate Bridge in New York. According to the Guinness World Records, it is the world's widest long-span bridge. It is also the fifth longest spanning-arch bridge in the world, and it is the tallest steel arch bridge, measuring 134 metres (440 ft) from top to water level. Until 1967 the Harbour Bridge was Sydney's tallest structure. 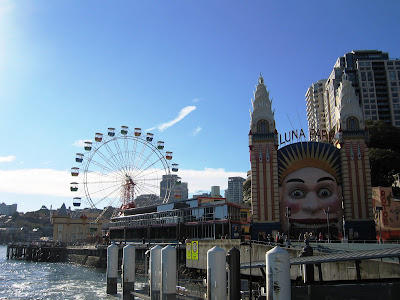 Above: Luna Park, located at Milsons Point, on the northern shore of Sydney Harbour. 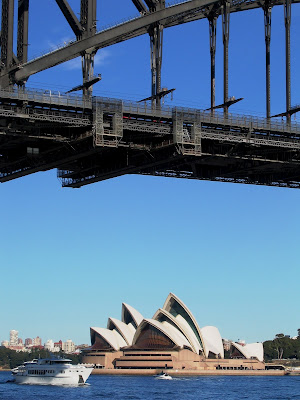 Above and below: The Sydney Opera House.

There is no doubt that the Sydney Opera House is his masterpiece. It is one of the great iconic buildings of the 20th century, an image of great beauty that has become known throughout the world – a symbol for not only a city, but a whole country and continent. 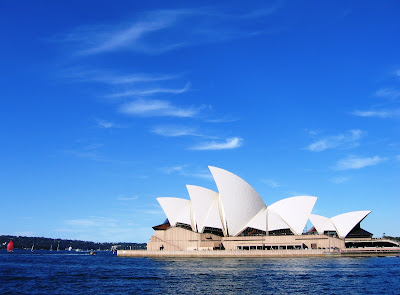 Contrary to its name, the building houses multiple performance venues. The Sydney Opera House is among the busiest performing arts centres in the world, hosting over 1,500 performances each year attended by some 1.2 million people. It provides a venue for many performing-arts companies, including the four key resident companies Opera Australia, The Australian Ballet, the Sydney Theatre Company and the Sydney Symphony Orchestra, and presents a wide range of productions on its own account. It is also one of the most popular visitor attractions in Australia, with more than seven million people visiting the site each year, 300,000 of whom take a guided tour. 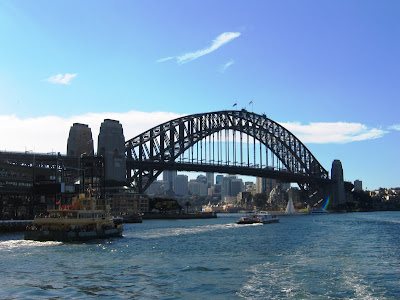 Above: The view of the Sydney Harbour Bridge from Circular Quay. 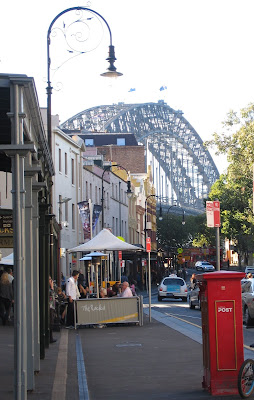 Above: In The Rocks area of Sydney, the Harbour Bridge looms over everything! 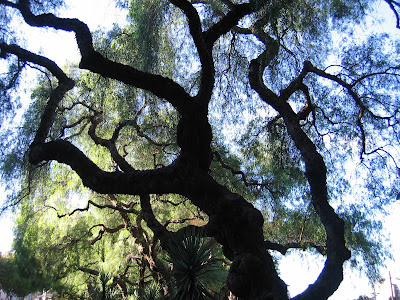 Above: The gnarled contours of a pepper tree at The Rocks.
Notes Wikipedia:

The Rocks is an urban locality, tourist precinct and historic area of Sydney's city centre. It is located on the southern shore of Sydney Harbour, immediately north-west of the Sydney central business district. . . . The Rocks area borders on the Bradfield Highway, leading to the Sydney Harbour Bridge, with the localities of Dawes Point and Millers Point, to the west. It is immediately adjacent to Circular Quay on Sydney Cove, the site of Australia's first European settlement in 1788. 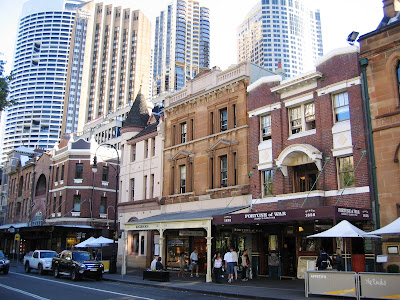 Above: At right is the Fortune of War, Sydney's oldest pub! 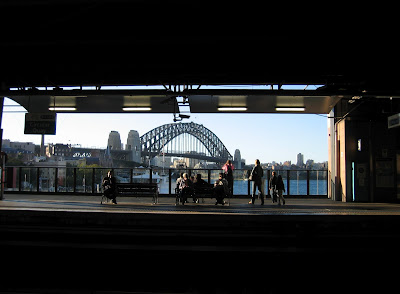 Above: The train station with the best view in the world! 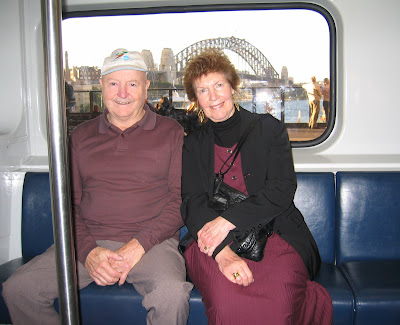 Above: Mum and Dad on the train we caught at Circular Quay Station. 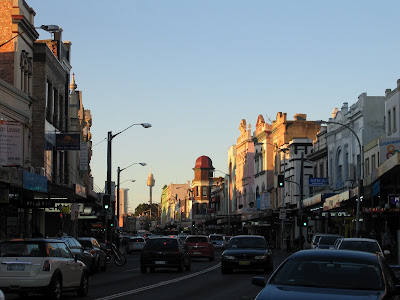 We took the train from Circular Quay to Newtown (above), an inner-city suburb of Sydney I've written about before. 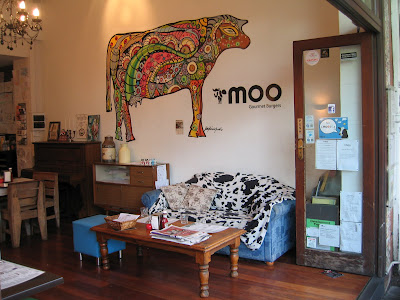 Above: The interior of an eating establishment in Newtown that caught my eye!

Always enjoy getting back to Sydney when I can and walking around the Harbour and Rocks. My kids have seen more of Sydney CBD than their own in Brisbane!

Thanks for sharing these beautiful pictures. Your photos from Australia are always a big treat. God bless you, Michael.