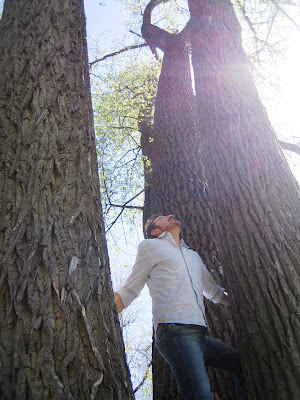 I cannot cause light. The most I can do
is put myself in the path of its beam.

I'm thinking this is the challenge for all who seek to walk the way of Jesus: to be willing embodiments of God's light, of God's spirit of compassion, clarity and justice; to be, in other words, vessels filled with transforming energy not our own, yet which we're called to channel to the world through our loving actions of body, speech and mind.

This is what I've come to believe, at least. And from what I can gather, it's what all the great spiritual traditions invite us to do. I try to live this challenge as a gay man, true to the gift of my sexuality, within the Roman Catholic faith tradition. This blog is very much a journal, a testimony, to that endeavor.

Recently I was at an event where someone asked me how I can "stay in the church." This person had recently left her parish, hurt and grief-stricken by the Catholic hierarchy's support of the "marriage amendment," the upcoming November 6 ballot initiative that will ask Minnesotans to vote on whether or not the state constitution should be amended so as to define marriage as "solely between one man and one woman." The thing is, civil marriage for same-sex couples is already banned in Minnesota. Accordingly, this amendment seems to many to be especially mean-spirited and hurtful to gay couples and families already treated as second-class citizens.

As my readers would know, I'm very much involved in the efforts to spread the message that Catholics can in good conscience support marriage equality and vote 'no' on the proposed "marriage amendment." I engage in such efforts primarily as executive coordinator of Catholics for Marriage Equality MN (C4ME-MN), an initiative of the Catholic Pastoral Committee on Sexual Minorities (CPCSM). I'm also on the board of Minnesotans United for All Families, a broad coalition of organizations and community, faith and business leaders, dedicated to defeating the amendment.

I'm grateful to be working with the many dedicated and inspiring folks who comprise C4ME-MN. Indeed, I believe that it's because I'm working on a daily basis with fellow Catholics dedicated to advocating marriage equality that I'm not discouraged and driven from the church by the actions of the hierarchy. I'm surrounded by supportive and inspiring people who keep me energized and hopeful, and who remind me that we are the church. It saddens me that there are increasing numbers of Catholics who feel so hurt and betrayed by the actions of the hierarchy, including, in many cases, of their own parish priests, that they no longer feel as if they belong. So many Catholics, I'm discovering, are feeling this way; are feeling excluded, isolated and bereft. I'm thankful that part of C4ME-MN work is organizing events and actions that bring these folks together and give them a sense of inclusion, purpose and hope. 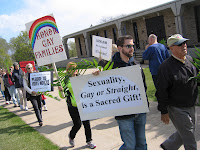 One such event was the series of Lenten prayer vigils outside the chancery of the St. Paul-Minneapolis Archdiocese. It concluded on Palm Sunday (right), but another vigil has commenced on a weekly basis inside the St. Paul Cathedral – it's a weekly prayer vigil in support of all Minnesota families. Then there was the recent "Come Out and Sing Out to Defeat the Marriage Amendment" event, one that I unfortunately missed, owing to the fact that I was in Australia for two weeks. And let's not forget the "Of Light and Hope" worship service in March, last Sunday's vigil in St. Cloud, the ongoing house gatherings of Catholics, and the upcoming Catholic conversations training. 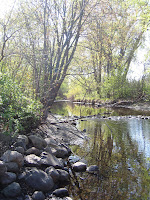 It's certainly been an eventful and energizing spring! In fact, it can all get rather overwhelming, which is why I'm so grateful for the love and support I receive from my friends, many of whom are featured in the following photos, and the sense of renewal and hope I experience by the beauty of the natural world around my South Minneapolis home – beauty that is also highlighted in many of the following photos. 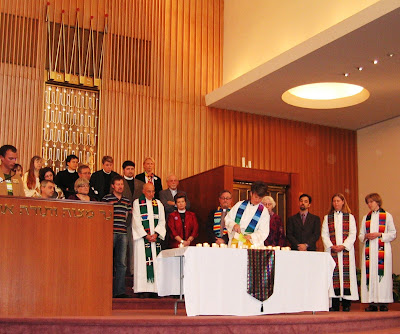 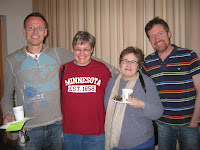 Above: "Of Light and Hope," a multi-faith community worship service that took place at Mount Zion Temple, St. Paul, on Thursday, March 29, 2012, and served to connect people of faith in their efforts to defeat the 'marriage amendment.' Fr. John Brandes and I represented Catholics opposed to the amendment during the candle-lighting ritual.

Right: Standing with friends (from left) Doug, Dawn and Lynn. 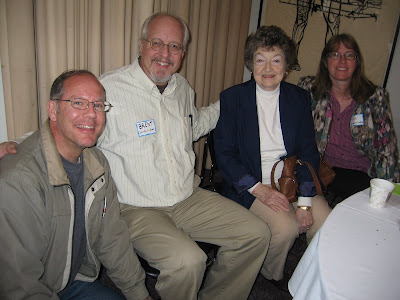 Above: Catholics for marriage equality at the "Of Light and Hope" worship service. From right: Paul, Brent, Paula and Lisa. You may recall that Brent and Lisa feature in the series of "video vignettes" entitled Catholics for Marriage Equality. Also worth checking out is Lisa's April 2 Sensus Fidelium article about New Ways Ministry's Seventh National Symposium on Catholicism and Homosexuality, which she attended in March.

Left: With my friend and house-mate Tim at the March 30 Friday Lenten Fish Fry at St. Albert the Great Catholic Church in South Minneapolis. 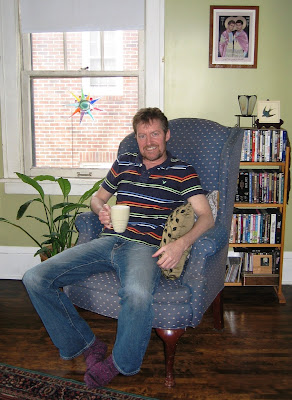 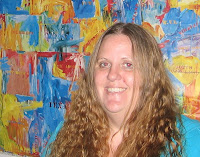 Above: Enjoying a quiet moment and a good cup of tea! My friend Susan (left) took this photo. She always manages to make me look half-way decent! 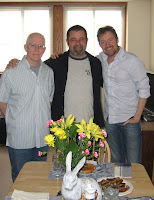 Right: Easter Sunday brunch with my friends Rick and Brian. My friend and housemate Tim took this photo. 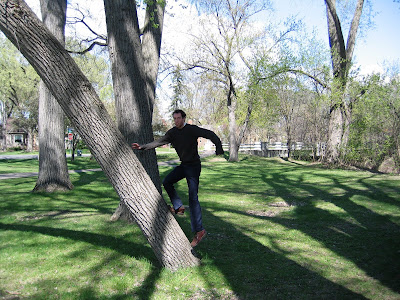 Above: After brunch on Easter Sunday, Tim and I went for a walk along Minnehaha Creek, which is close to where we live in South Minneapolis. I took this great shot of Tim, while he took the one of me that opens this post. As you can see, the trees along the creek are quite something! 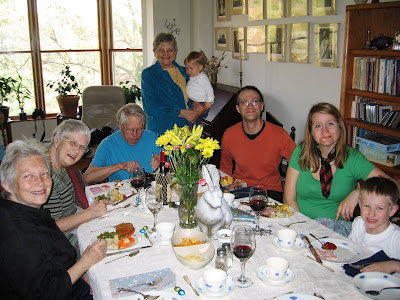 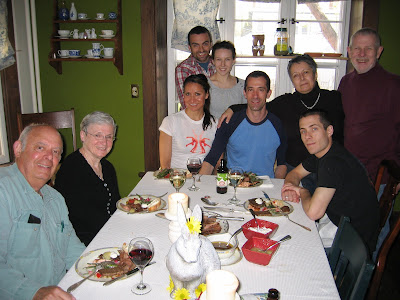 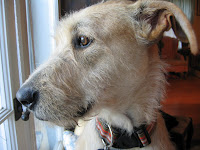 Above: Easter Sunday dinner with friends (from left) Fred, Madeline, Kim, Curtis, Liana, Mike, Noelle, Phil and John. Yes, I ate very well on Easter Sunday! So much so that one friend commented on Facebook: "I'm stuffed just looking at all the food you ate today. But I didn't have a tree-climbing adventure, either." 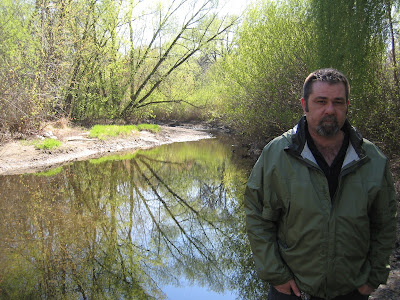 Above and below: On the afternoon of Wednesday, April 11, 2012, my friend Brian and I enjoyed a walk along Minnehaha Creek. 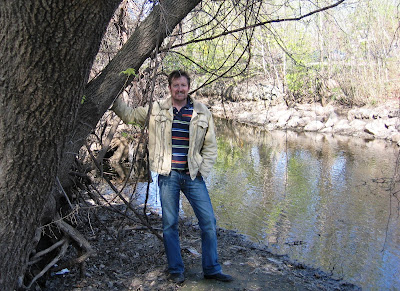 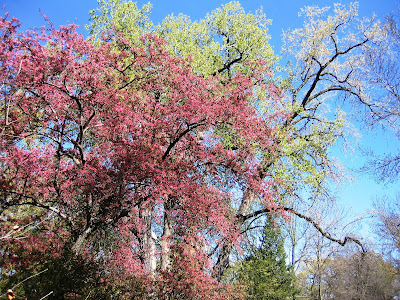 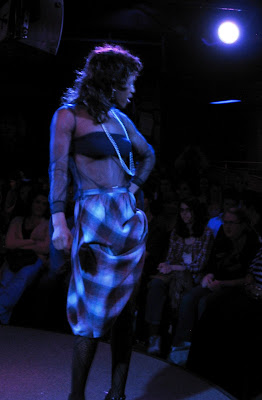 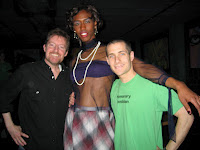 Above: In April, my friend Ahmed debuted his drag queen persona Aaliyah at an event in Minneapolis. It was a great night!


Left: With Aaliyah and Phil. 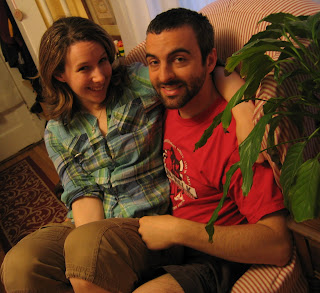 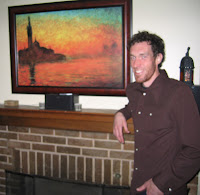 Above: Friends Liana and Curtis.


Right: My friend and house-mate Tim. I took this photo after we came back from seeing Time Stands Still at the Guthrie Theater.


See also the previous Wild Reed post:
Out and About – Winter 2012

Thanks for sharing your month with us. Out and About is always a treat. PEACE - Mark

Thanks, Mark! Peace to you too.