My dear friend Dorothy Olinger, SSND passed away on Monday. She was 92 and died peaceful in Mankato, Minnesota. As she had requested, her body had a natural burial at Our Lady of Good Counsel. 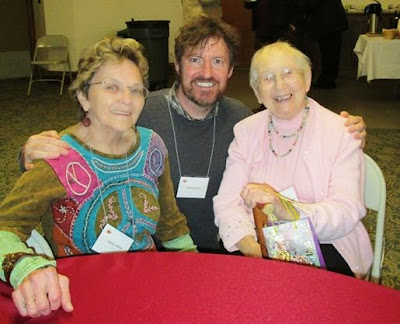 Above: With Darlene White (left) and Dorothy Olinger
– Minneapolis, October 18, 2014.

I last saw Dorothy at the Call to Action MN Fall Conference, which took place in Minneapolis last October. At this event, Dorothy was presented with CTA-MN's 2014 Leadership Award, and the following was said about her: 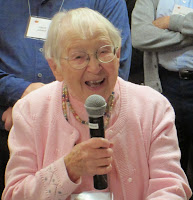 We honor Dorothy for her tireless work as teacher, mentor, organizer and passionate conveyor of the New Creation Story. For nearly 20 years, she was the guiding light of Global Education Associates Upper Midwest. In the early 1980s, Dorothy’s life was changed as she began to learn and internalize the work of the great geologian, Thomas Berry. She embarked on a journey of deepening her own understanding of this unfolding evolutionary story. And so, in the final career of her 70 years as a School Sister of Notre Dame, Dorothy directed the work of GEA where she was able to share the story that had become the passion of her life. . . . For many, she pioneered our journeys into this “new way of thinking” about the universe and our place within it. We are eternally grateful. 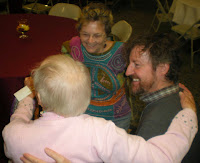 I was just one of many people who appreciated the opportunity that last October's CTA-MN conference provided to personally thank Dorothy for her pioneering work. As regular Wild Reed visitors may know, I recently developed a workshop on evolutionary spirituality entitled "Companions on a Sacred Journey" which I'm presenting to groups of local Catholics. Dorothy and her work were a real inspiration for me in learning about the "new universe story" of evolutionary spirituality, and thus in developing my workshop. Thank you, Dorothy!

In honor of Dorothy's inspiring life and legacy, I share this evening an excerpt from James Conlon's book The Sacred Impulse: A Planetary Spirituality of Heart and Fire. It's an appropriate excerpt to share as Dorothy beautifully embodied the "letting go" that Conlon says is the hallmark of all who move beyond the ego-self to become "cosmic people." Without doubt, Dorothy was a cosmic person; a person who through her spirituality of evolution joyfully modeled for many (myself included) the letting go of all that is narrow, rigid and stagnant so as to fully embody reverence, appreciation and the possibility of grasping what is truly real.

One of the great challenges for people today is to move from the self-enclosed "autistic" ego-self to become cosmic people. Their pain and struggle are also the energy source for fashioning a planetary community that is vital, compassionate, and whole. Such an undertaking requires that we face the challenges before us, realize within ourselves the energy necessary to move forward, embrace new ideas, and listen to the collective wisdom that bubbles up within us through the voices of Earth.

In classical theology, this spiritual path that we are being invited to embark upon is known as the via negativa, the negative way. It invites us to give up even denial and to open ourselves to the struggles of life. This spiritual practice takes us beyond the dark night of the institutional soul, the dark night of incipient despair that permeates our psyches, and the dark night of dismantled and misdirected leadership. To embrace the dark night of our times is to give up the illusion that we are in control of all dimensions of our life. To live into the via negativa is to allow ourselves to let go of many of the formational belief systems that we have inherited from our culture and our churches. To let go of a God who is fixed and distant. To let go of a tradition that claims to possess all truth and that imposes contradictions on our impulses and wholesome aspirations. To let go of a historical and static religion that sees incarnation, revelation, and crucifixion as events frozen in time. To let go of human arrogance and denominational superiority. To move beyond the inheritance of a world that has repressed our imaginations, fostered conformity, and denied radical restructuring.

Julian of Norwich reminds us that "seeing God cannot be a continuous experience." That is the nature of who we are. Meister Eckhart said, "Only those who let go can dare to reenter." In other words, unless you let go of your marriage, the marriage may not survive. Unless you let go of trying to be the teacher, nobody is going to learn. It's all about letting go and daring to reenter. We are both divine and finite. That is the paradox we are trying to live with. Our lives are marked by what we have let go of: relationships, jobs, places. In our spirituality of letting go, we learn reverence and appreciation. Letting go of illusion makes it possible to grasp what is truly real. In letting go of the enemy, we discover forgiveness. Letting go of self-centeredness and competition uncovers the possibility of gratitude and partnership.

. . . Our relationship to Earth is imperiled. . . . The planetary community is both collapsing and being born right now. We are all familiar with the long list of environmental ills: the greenhouse effect, the death of rain forest, toxic waste, topsoil depletion, species extinction, and on and on. Another predictable result of cultural collapse is fundamentalism. Whenever a culture dies, clarity gets lost. Things get muddy. People want answers that do not exist. That is why fundamentalism is so strong in times of cultural transition. It gives the illusion of clarity where it does not exist.

We need to allow the structures to die, whether they are ecclesial, political, educational, or medical. The paschal mystery is being reenacted in our midst: incarnation and death, but also resurrection. Things die, but life continues.

– James Conlon
Excerpted from The Sacred Impulse:
A Planetary Spirituality of Heart and Fire
pp. 90-92