Integrating Cernunnos, "Archetype of Sensuality and the Instinctual World" 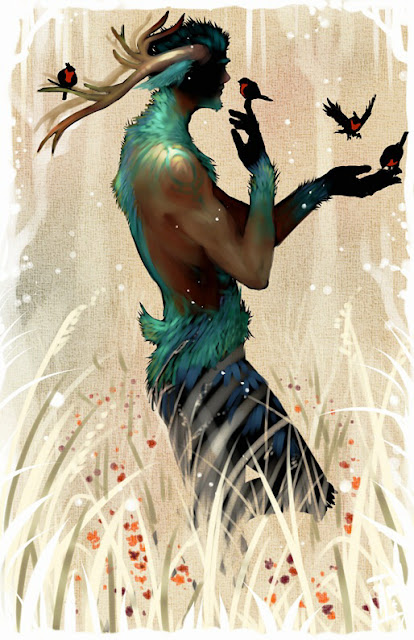 I recently came across the above image by Amdhuscias. It's quite beautiful, don't you think? It depicts the antlered (or horned) god Cernunnos (KER-noo-nos) of Celtic mythology. Upon seeing it I was reminded of something I read of this god (or archetype) in my friend Ed Sellner's book The Double: Male Eros, Friendships, and Mentoring – From Gilgamesh to Kerouac.

Shortly after, while researching my post on the pagan origins of All Saints Day, I came across an insightful perspective on Cernunnos by feminist neo-pagan Starhawk in her book The Spiral Dance.

I share the insights of both Ed and Starhawk this evening, starting with the following excerpt from Ed's book, The Double.


Ancient peoples, including the Greeks and Celts, were convinced that eros is a unifying power, a source of creativity and meaning, an opportunity for spiritual growth. It is definitely associated with attractions and needs, both physical and spiritual, which often overlap, especially when people are intimately involved or living in close proximity with each other. For warriors, as we've seen in the stories of Gilgamesh and Enkidu, Achilles and Patroclus, and Cú Chulainn and Ferdiad, the battles and wars in their lives brought them closer together than probably any other situation might, and because of their deep friendship as well as their crucial dependence on each other for survival itself, many of them responded both emotionally and physically. 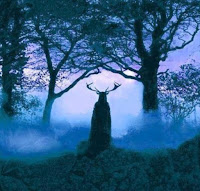 The ancients, especially the Celts, thus knew the power of eros, acknowledging the inherent mystery of attraction and celebrating it in stories, rituals, and dance. They knew that attraction contains all sorts of elements – from childhood experiences, dream figures, fantasies, to the basic human need to touch and be touched. They knew too that, among both women and men, some might be more strongly pulled to the opposite or to the same gender as themselves, while some might be drawn to both. This, the ancients thought, was a matter of personality and taste, like the preference for red wine rather than white. They didn't divide people nor themselves as we do today into strict categories labelled "heterosexual" or "homosexual." They simply acknowledged erotic feelings in relationships when they became aware of them, and were grateful for them as a sign of genuine love. They recognized that although eros can be expressed genitally, and at times self-indulgently, its presence is also a manifestation of the deeper levels of the soul, and of the soul's needs for wholeness and meaning, friendship and community. They did not seek to demonize eros or erotic attraction as the later Christians did by turning the god Cernunnos into Satan himself, replacing the stag horns of the Celtic god of fertility in art, icons, and spiritual literature with demon's horns, tail, and cloven feet. 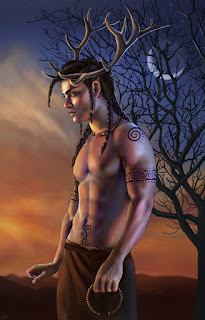 Contrary to the religious formation many of us received which made us wary of anything related to sexuality, certain of our friendships, including male friendships, will have an erotic quality to them – as the ancient Celts realized. They were grateful for this life-giving energy, expressed in their pagan devotion to Cernunnos, the archetype of sensuality and the instinctual world. As that powerful archetype, Cernunnos can be found in all of us: in our desire at times to shed our cloths and be naked in the rich presence of nature, to be one with the landscape; to be naked, like our first parents who walked the earth, naked as when we were first born, naked as when we had our first sexual intimacies. To demonize Cernunnos, or to repress him into unconsciousness only gives him extraordinary power to erupt unexpectedly and perhaps inappropriately at times or to hurt us with a poison in our system that makes us ever more self-destructive. Cernunnos needs to be integrated into our spirituality and daily lives. 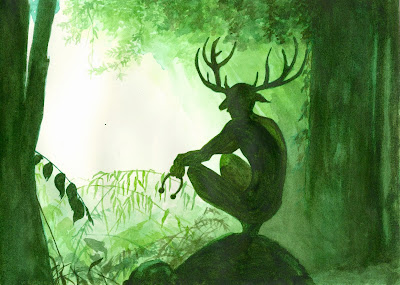 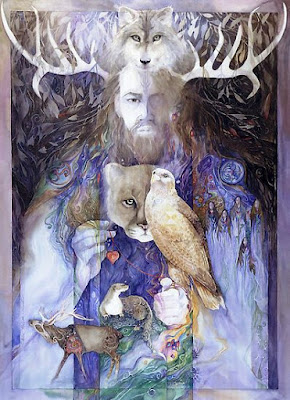 – Starhawk
Excerpted from The Spiral Dance

Cernunnos has been my deity of choice since I discovered him as a child. To me, he's always represented the beauty and the power of the Wild Things of Earth. He doesn't create nor does he smite. His presence is to remind us that this planet is unique in all of the cosmos, that it has given us life and that we should celebrate the beauty and the life that surrounds us.

Beautifully said, Jane! . . . Thanks as always for your sharing your thoughts.

Beautiful, evocative article. This is very affirming and inspiring for me. Thanks!

Thanks for your kind words, Rebelius.

You might find this article about Cernunnos, which I posted earlier this evening, to be also of interest to you.

You're welcome Michael and thanks for the link which I really enjoyed, especially your Prayer To Cernunnos. It resonates with my own quest to unify what were seemingly disparate aspects of my life; spirituality and sensuality/sexuality, and to honour my instinctual 'wild, free and kind' drives as natural and sacred after all. It also reminded me of Aleistair Crowley's Hymn To Pan, which had a profound impact on my being able to find peace with who and what I am and the freedom to explore a life that is not exclusively spiritual or carnal but inseparable in its natural essence.
I'm blessed to have been led to your blog, in once again seeking Cernunnos for solace and inspiration, and am really enjoying exploring the material you have sourced here, with great respect of your courage in being true to yourself and expressing your findings along the winding way...
With Love, As Love, Rebelius

Thanks again, Rebelius, for your thoughtful and kind words.

I'm thinking you may appreciate and enjoy The Leveret, another blog I maintain. It's dedicated to celebrating the male body, the gay soul, and the symbol and image of the hare in folklore and art.

Thankyou for your thoughtfulness Michael. I really like it. Blessed Samhain to you.
With Love, Rebelius