Still Somewhere in Between 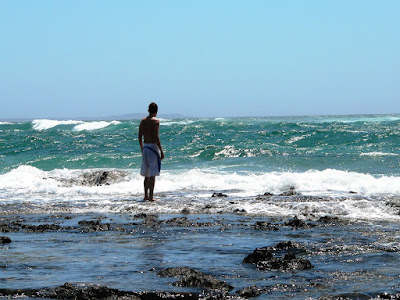 Ten years ago on this 2nd Sunday in Ordinary Time, I gave the homily at St. Joan of Arc Catholic Church in Minneapolis. (Of course, they couldn't, and still can't call homilies by non-members of the church's clerical caste "homilies," but that's essentially want they are.)

My homily on January 15, 2006 was entitled "Somewhere in Between," and drew from both my experience as a gay man in the Catholic Church and the beautiful imagery of coastal tidal zones, those special in-between places that can be both land and sea. (One such place in Australia is a very sacred place for me, as I've previous talked about here, here and here.)

The experiences, insights, imagery, and hopes that inspired and are expressed through my homily of a decade ago remain very meaningful to me. And over the years others have shared with me how meaningful and helpful this particular homily has been for them. That's something about which I feel very grateful and honored.

The full text of "Somewhere in Between" can be read here, while following is an excerpt.


I once had a theology professor at the College of St. Catherine who maintained that there is a tendency for humans to gravitate to the extremes; to move, in other words, towards those often polarizing extremes of a given issue or situation. Why is this so?

It’s because at the extremes it is safe. You know exactly where you stand and in what to believe. Everything, and I mean everything, is clear-cut, black and white. One doesn’t have to be bothered by pesky questions or unsettling ambiguities.

I think of the extremes as steep and jagged mountains – majestic and triumphant, but, in reality, cold and barren; unable to support any growth or any life of depth or complexity. They are also places from which any questioning or healthy skepticism is banished. They are often, therefore, the birthplace of fanatical devotion to narrow preoccupations; the birthplace of irrational fears associated with difference and change; the birthplace of dehumanizing stereotypes and sweeping judgmental pronouncements.

I think of the institutional component of our Church and how so many of its recent pronouncements regarding gay and lesbian people have clearly been born from such places. I think of the two extreme views that the Church presents of gay men – the first being that of the promiscuous sexual outlaw, the second being that of the afflicted individual bound to lifelong celibacy.

Well, I’m sorry, but I’ve discovered that I’m not very good at being either celibate or promiscuous. I guess I’m somewhere in between.

Indeed, it’s what I long for – a searching life “somewhere in between.” Not a desperately searching life, but one filled with hope and the joy of pilgrimage, one that is respectful of honest doubts, one that is open to authentic relationships and to God in many worlds.

I hope one day to marry the man I love – and I have a dream of holding our marriage ceremony within the tidal zone of a beach, in that place “somewhere in between” the land and the sea.

. . . I would imagine that most of us are somewhere in between the various extremes that both our church and society often present to us. And I think that’s okay. In fact, I think it’s more than okay. I believe we’re called to stand and live in the often messy middle between polarizing extremes. Such an “in-between” place is like a valley – green and fertile – that lies between those mountains of extremism. It’s not a place of indecision or lukewarm commitments. It’s not a place where “anything goes.” Rather it’s a place where we allow our convictions and beliefs the opportunity to be informed and shaped by new insights born of our experiences and the experiences of others; a place where we get to discover the light of God in unexpected places and faces.

In other words, that space between the extremes is the realm of authentic human experience, and therefore authentic religious experience. In that space we are all on the same level and can look into one another’s eyes as we share the reality and truth of our experiences. In that space we can walk and journey with each other, we can be in relationship. And in that space between the extremes we can collectively live and embody that fullness of life and truth that Jesus spoke about and that our church claims to possess. It is in the messy middle that we discern and embody God’s ongoing revelation and where accordingly, our church can be most catholic.

– Michael J. Bayly
Excerpted from "Somewhere in Between"
(a homily delivered January 15, 2006 at St. Joan of Arc Catholic Church)

See also the previous Wild Reed posts:
• On Sacred Ground
• Another Time, Another Place
• Sharing a Good Thing
• Sufism: Way of Love, Tradition of Enlightenment, and Antidote to Fanaticism
• Amos Oz on the Essence of Fanaticism
• Memet Bilgin and the Art of Restoring Balance
• Seeking Balance