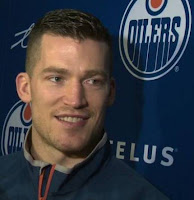 It's been quite some time since I posted an installment of The Wild Reed's "What a Man!" series.

In case you've forgotten, this series was started back in April 2011 as a way of highlighting well-known straight men who, regardless of the risks to their careers or popularity, have courageously chosen to publicly support LGBT people and their civil rights. To date, The Wild Reed's "What a Man!" series has spotlighted seven sportsmen (Ben Cohen, Sean Avery, Hudson Taylor, Nick Youngquest, Chris Kluwe, Brendon Ayanbadejo, and Nick Symmonds) and one U.S. Republican politician (John Kriesel).

This evening the spotlight turns to National Hockey League (NHL) player Andrew Ference (above left), who is a spokesperson for Pride Tape, a new campaign encouraging LGBT hockey players to "stay on the ice."

Pride Tape is basically rainbow-colored strips that hockey players can decorate their sticks with. The campaign is intended for LGBT athletes and allies alike to show their support.

“[It’s] a badge of support to LGBT youth, to say 'you’re welcome in our sporting communities,'” Kris Wells, director of the Institute for the Sexual Minority Studies and Services at the University of Alabama, recently told CBC. “This is a way to signal you’re an ally without having to actually say anything.”

Adds Ference, who plays for the Edmonton Oilers, “Some kids just stop playing the game they love, just because they’re gay. Let’s show EVERY player they’re welcome on the ice.”

The Pride Tape campaign’s Kickstarter page has garnered 374 backers, totaling $17,000 to date. The goal is to get $39,386 in donations by February 4, in order to manufacture and distribute 10,000 rolls of tape.

So . . . if you'd like to start the New Year by contributing to a worthwhile cause, this would be it! Click here to contribute to Pride Tape's kickstarter campaign. 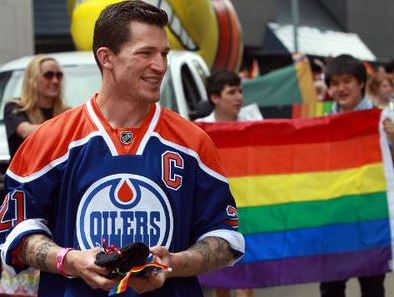 Above and below: In 2014 Andrew Ference made history by becoming the first professional hockey player in Edmonton to march in the city’s 34th annual Pride Parade in support of the LGBT community. Ference told the Edmonton Journal the decision was “kind of a no-brainer,” adding:

Making sure that [LGBT] youth know they have allies at the pro level, or whether it’s a teammate who might be thinking about coming out, or whatever it is, we want to make sure that it’s an accepting environment for everyone. I know most of my teammates and guys around the league line up with the same kind of belief. 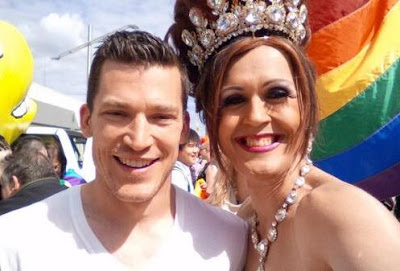 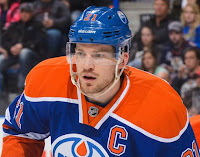 Andrew James Stewart Ference (born March 17, 1979) is a Canadian professional ice hockey defenceman and an alternate captain for the Edmonton Oilers of the National Hockey League (NHL). Ference started in the NHL during the 1999–2000 season and has played for the Pittsburgh Penguins, Calgary Flames and Boston Bruins. In 2011, Ference helped the Bruins to their 6th Stanley Cup Championship. He was born in Edmonton, Alberta, but grew up in Sherwood Park, Alberta.

Ference's association with environmentalist David Suzuki while in Calgary led him to create a carbon-neutral program for the NHL, which now includes over 500 players who purchase carbon offset credits to counteract the negative environmental impact of professional sports. In February 2012, National Geographic began a ten-episode Web series called "Beyond the Puck" highlighting Andrew's life as a NHL Player and "eco-warrior." 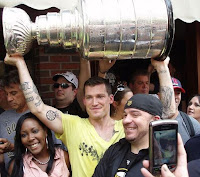 On September 5, 2011, following the Bruins Stanley Cup championship, Ference organized and led a parade and flash mob in Boston's North End, which is the area where he resided during the NHL season. After bringing the Stanley Cup to and from Spaulding Rehabilitation Hospital on a bike trailer, Ference brought the Cup to an area of the North End outside the TD Garden. There, the Cup was hoisted up on a platform carried by friends and family, and paraded through the North End, with many stops at local shops along the way. Ference and the other Cup-carriers were accompanied by a marching band, members of The Boston Bruins Ice Girls, and the Boston Bruins mascot Blades. Hundreds of fans also joined them for the parade, which was concluded with a dancing flash mob. 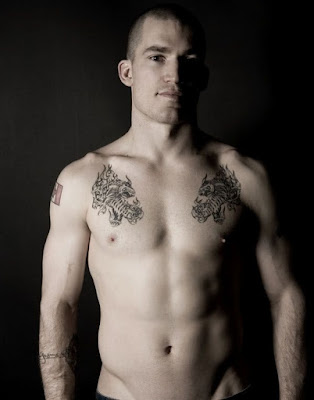 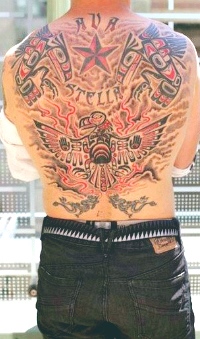 Andrew Ference is pretty much the king of tattoos – good tattoos. He has his back entirely covered in a tribal, red and black design; along with numerous tattoos elsewhere on his body including his chest and arms. His first tattoo was a Canadian flag on his upper arm that he got when he was 16. He had just moved from his home in Canada to Portland, Oregon and wanted to take a piece of Canada with him to the States. When asked what his most meaningful one is, he said it’s his daughters’ names, “Ava” and “Stella” across the top of his back. What a great dad.

Labels: What a Man