Inauguration Day in the Twin Cities 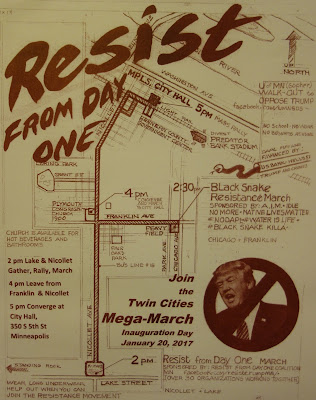 Thousands of people are expected to protest the inauguration of President-elect Donald Trump at events throughout the Twin Cities on Friday.

The largest of nearly 10 protests in the works is scheduled to take place through downtown Minneapolis. The "Resist from Day One Coalition" has organized a march that begins on Lake Street at 2 p.m. and follows a route along Nicollet Mall to City Hall at 5 p.m.

Boxer said the coalition does not have official plans to block highways or disrupt businesses.

Minneapolis police spokesperson Corey Schmidt said the department has no planned road closures, but will make them on an as-needed basis. He said officers are assigned to Friday's protest events and the department can "get additional staffing from around the city if needed."

The Women's March Minnesota is scheduled for Saturday morning at the State Capitol. Organizers say they expect 20,000 people to attend.