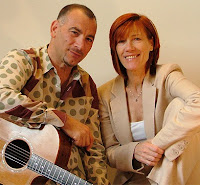 An album I've been listening to a lot these past few months is Kiki Dee and Carmelo Luggeri's 1998 release, Where Rivers Meet, which I came across just last year.

It's a beautiful collection of recordings, one which has been described as the duo's "most adventurous." This is because the "rivers" of the album's title can be seen to represent, among other things, the influences of east and west, artfully blended and brought to musical life through Kiki and Carmelo's sublime collaboration with musicians from both India and the UK. The result, says the Mundell Music website, is "an ambient and unusual album," one which bears testament to the duo's "enthusiastic commitment to their musical muse, regardless of fashion or trends." 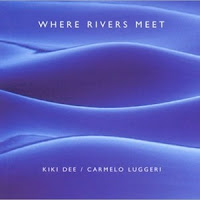 Tonight I share the album's closing track, "Wake Me From This Sleep." It's a beautiful meditation on that type of consciousness that mystics from all the great spiritual traditions say we experience when we become one with the Divine Presence within and beyond all things. The Wild Reed's current Holy Week series speaks to this type of union, as does this blog's numerous posts on the Sufi Way.

Following the video of "Wake Me From This Sleep" is a review by Kevin Cooper of Kiki and Carmelo's November 7, 2014 concert at St Mary’s Church in Lowdham. (Yes, the pair is going strong! Their latest album is the beautiful A Place Where I Can Go.) 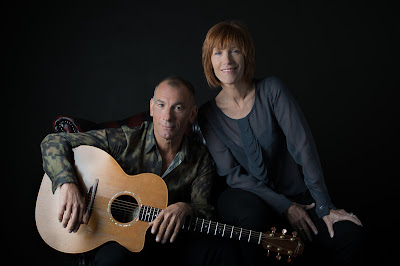 Given that Kiki Dee and Carmelo Luggeri’s songs often have a spiritual focus, it was apt that their Lowdham return was at the resplendent St Mary’s Church.

Whilst she may never escape the legacy of her 1976 chart topping duet with Elton John, "Don’t Go Breaking My Heart," Kiki Dee is a singer songwriter whose contribution to music cannot be under estimated. This latest acoustic concert demonstrated the versatility and integrity of an artist who, despite the fact that she no longer sells out vast arenas, still has much to offer an industry that is becoming ever more formulaic and increasingly driven by commercial success rather than creativity and talent.

Having been a former backing singer with Dusty Springfield, the first European artist to sign for Tamla Motown, having had numerous hits in the 70’s; Kiki Dee has been one of the truly great British singers. After having fulfilled an admirable fifty year stint in the music business, she still managed to take to the stage as if she were 19 again. Accompanied by her long time collaborator, musical partner, and virtuoso guitarist Carmelo Luggeri, she was as brash as ever with that iconic red bob.

The first half of the show was very fluid, with the pair changing between different styles and eras. This concert combined a mixture of Dee’s own material, hits from her back catalogue and collaborations with Luggeri from their most recent albums. "Salty Water" and "Amen and Goodbye" were from the east meets west themed album, Where Rivers Meet, and there were also tracks from the couple’s Walk of Faith album; "Everybody Falls (Habit Of A Lifetime)" and "Like Nobody’s Child."

Of course, many in the audience secretly yearned for Dee to perform the classics that have cemented her status as a star performer, such as the sensuously beautiful "Amoureuse," and "I’ve Got The Music In Me." And when she did they were rapturously received. A particular audience favourite was the stripped back, raw and honest version of "Don’t Go Breaking My Heart," which was absolutely sublime.

In amongst Dee’s and Luggeri’s songs was an array of covers ranging from Depeche Mode’s "Personal Jesus," through to Sinatra’s "It Was a Very Good Year," to Kate Bush’s "Running Up That Hill," with fine versions of Leonard Cohen’s "Dance Me To the End of Love" and Janis Ian’s "At Seventeen" thrown in for good measure.

Ending the night with a very gentle version of Buddy Holly’s "True Love Ways," hastily followed by a truly sublime take on the Motown classic, "How Sweet It Is (To Be Loved By You)" which justifiably earned the duo a standing ovation.

This acoustic experience was one that for all of the right reasons, will remain in my memory. What with the awesome setting of the old church, Dee and Luggeri effortlessly blended their soul, pop and rock roots into heartfelt, emotionally thrilling music. What a terrific evening!

See also the previous Wild Reed posts:
• Sufism: A Call to Awaken
• Don't Go Back to Sleep
• "Joined at the Heart": Robert Thompson on Christianity and Sufism
• Doris Lessing on the Sufi Way
• A Passage to India
• Learning From the East
• As the Last Walls Dissolve . . . Everything Is Possible
• The Source Is Within You