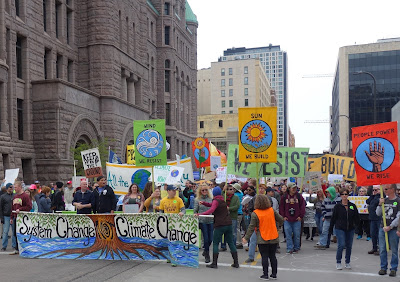 These old men they make their dirty deals
Go in the back room and see what they can steal
Talk about your beautiful for spacious skies
It’s about uranium; it’s about the water rights

Got Mother Nature on a luncheon plate
They carve her up and call it real estate
Want all the resources and all of the land
They make a war over it; blow things up for it

The reservation out at Poverty Row
There’s something cooking and the lights are low
Somebody trying to save our mother earth
I’m gonna help ’em to save it
and sing it and pray it, singing . . .

No no Keshagesh, you can’t do that no more! 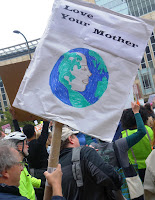 This past Saturday, April 29, 2017, my friend Pete and I participated in the People's Climate Solidarity March in downtown Minneapolis.

Here we gathered with close to 1,000 others in solidarity with the People's Climate March (2.0) held that same day in Washington, D.C. According to The Washington Post, "tens of thousands" attended that event.

The aim of all the various People's Climate rallies and marches held across the U.S. on Saturday was twofold: to challenge the anti-environment policies of the Trump administration and the threat that these policies pose to our climate and our communities, and to demand government action on the very real issue of climate change. 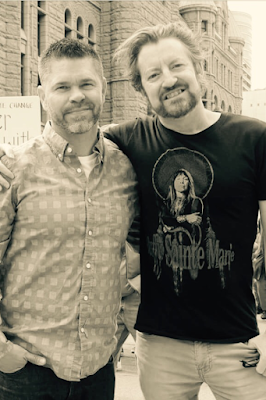 Above: Pete and I outside City Hall and across from the Federal Courthouse Building (right) in downtown Minneapolis where Saturday's rally and march started. From here, the approximately 1,000 people who gathered marched through the downtown area and across the Stone Arch Bridge to Father Hennepin Bluff Park.

I'm pictured wearing my Buffy Sainte-Marie t-shirt and, as you no doubt noticed, lyrics from the legendary singer-songwriter's 2009 song "No No Keshagesh" open this post. Given what this particular song is all about, it was resounding in my heart and head as I participated in Saturday's rally and march.

Keshagesh, you see, is a Cree word that means "greedy guts."

"It’s what you call a little puppy who eats his own and then wants everybody else’s,” says Buffy. In "No No Keshagesh" the term is used as a metaphor for corporate greed, and the song is about opposing such greed and its destructive impact on the environment. Mister Greed, I think your time has come / We're gonna sing it and pray it and live it and say it / Singing: No, No Keshagesh you can’t do that no more . . .

When I saw Buffy in concert last August, she dedicated her performance of "No No Keshagesh" to all who, at that time, were gathered at Standing Rock, ND to oppose the Dakota Access pipeline. (In February of this year the Trump administration approved the final permit for the completion of the controversial project, one that allowed for the pipeline to cross under a reservoir near the Standing Rock Sioux Tribe reservation. Trump's Department of the Interior also withdrew a legal opinion that concluded there was “ample legal justification” to deny this permit.) 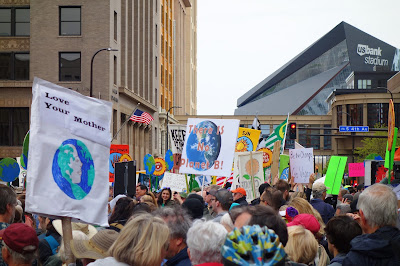 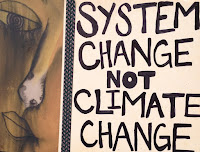 In promoting Saturday's rally and march in Minneapolis, organizers noted that:

This is a moment to bring the range of progressive social change movements together. Pushing back against the Trump agenda and at the same time pushing forward on our vision of a clean, safe world where the rights of all people are protected and expanded means we all must work together.

Meanwhile, The Washington Post reported the following on the People's Climate March in the nation's capital.

The Peoples Climate March, which originated with a massive demonstration in New York in September 2014, picked a symbolically striking day for its 2017 event. The temperature reached 91 degrees at D.C.’s National Airport at 2:59 p.m., tying a heat record for April 29 in the district set in 1974 – which only amplified the movement’s message.

On the eve of the march, the Environmental Protection Agency announced that it was beginning an overhaul of its website, which included taking down a long-standing site devoted to the science of climate change, which the agency said was “under review.” 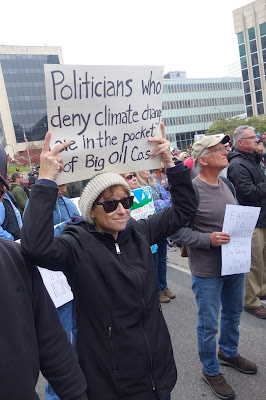 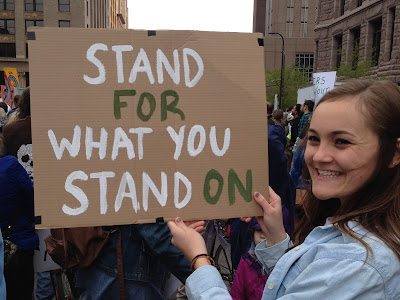 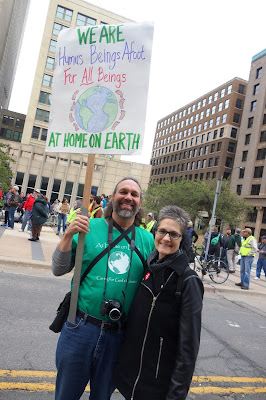 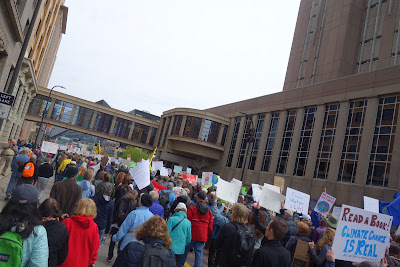 Every day the news from the natural world gets darker. And every month that passes without sufficient action gets us closer to some invisible but real deadline. So, we march. 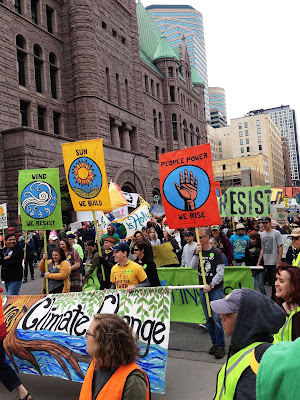 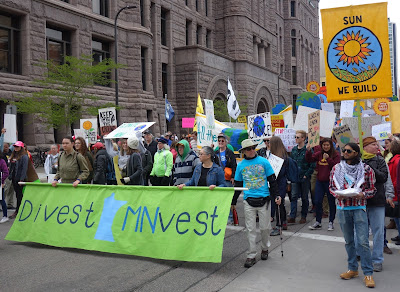 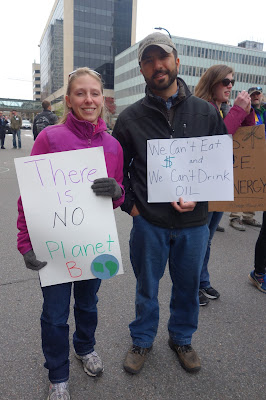 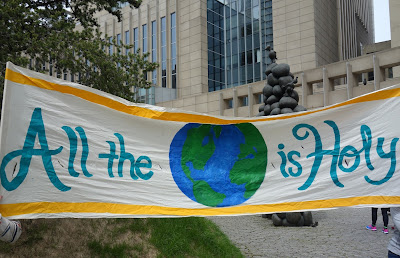 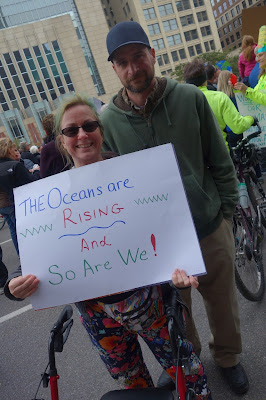 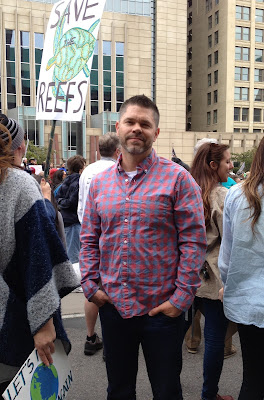 Above: Pete at Saturday's People's Climate Solidarity March in Minneapolis.

It was the first time my friend Pete had participated in any form of organized protest, which brings to mind ACLU executive director Anthony D. Romero's observation that President Trump has accomplished only one thing that is remarkable – "he has awoken American democracy like never before."

And I believe one way we're seeing this is in folks like Pete, and countless other first-time protesters, taking to the streets and challenging the policies of Trump and his wrecking crew of an administration – These old men [and] their dirty deals, in the words of Buffy Sainte-Marie.

Following is an excerpt from Nadia Prupis' April 28 Common Dreams article, "Trump's Disastrous 100 Days Fueling 'Golden Era of Activism'," in which Romero and others are quoted.

Some of the nation's leading watchdog groups released reports this week taking stock of President Donald Trump's first 100 days in office, covering everything from his failure to "drain the swamp" to the resistance movement meeting his administration head-on.

The consensus seems to be that Trump and his administration are doing everything they can to dismantle recent progress on civil rights, climate action, government accountability, and other critical measures for democracy – but in doing so, have ushered in a game-changing era of grassroots activism.

. . . "In his first 100 days, Donald Trump has accomplished only one thing that is remarkable – he's awoken American democracy like never before and reminded us all that it's 'We the People' who truly govern," said ACLU executive director Anthony D. Romero. "As Trump's 100th day in office approaches, it is clear that resistance to his unconstitutional and un-American policies is everywhere."

"It is broad, deep, and intersectional, breaking barriers across class, gender, race, and even political and party lines, as some conservatives cast their opposition to Trump," Romero said. "If sustained, this golden era of citizen activism may indeed be one of President Trump's greatest legacies – albeit unwittingly."

Related Off-site Links:
Hundreds Turn Out in Minneapolis for March Opposing Trump Administration's Policies on Climate – Miguel Otárola (Star Tribune, April 29, 2017).
Climate March Draws Massive Crowd to D.C. in Sweltering Heat – Chris Mooney, Joe Heim and Brady Dennis (The Washington Post, April 29, 2017).
Another Weekend, Another Protest: Thousands Turn Out for Worldwide “Climate March” – Taylor Link (Salon, April 29, 2017).
Marchers Use President Trump's 100th Day to Protest Climate Policies – Paul Smedley (PPP Focus, May 1, 2017).
100 Days of Trashing the Planet . . . and How YOU Can Stop It – Dominique Mosbergen (The Huffington Post, April 21, 2017).
Bernie Sanders: Trump Couldn't Be "More Wrong" on Climate – Devin Henry (The Hill, April 27, 2017).
Five Questions for Bill McKibben on Why the Climate March Matters – Yale Environment 360 (April 27, 2017).
McKibben Says, Whether In or Out of Paris, the "Task is Full-On Resistance" to Trump – Lauren McCauley (Common Dreams, May 1, 2017).
The Problem with the New York Times and Climate Change Isn't What You Think – Will Bunch (The Inquirer, May 1, 2017).
A Hundred Days of Trump – David Remnick (The New Yorker, May 1, 2017).

UPDATES: Climate Justice Is Racial Justice Is Gender Justice: An Interview with Jacqueline Patterson – Bill McKibben (Yes!, August 18, 2017).
How Greed, Fear and Our Own Biases Blind Us to the Realities of Climate Change – James S. Gordon (AlterNet via Salon, November 26, 2017).