Beltane: Celebrating the Sheer Exuberance of May 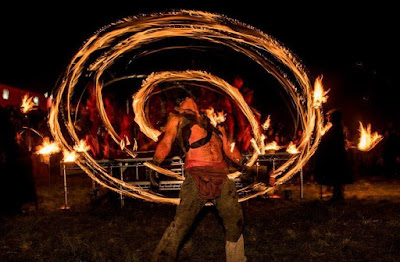 Above: A participant in this year's Beltane Fire Festival, an annual event in Edinburgh that marks the coming of summer. (Photo: Dan Mosley)

Earlier this evening my friend Kathleen and I celebrated the ancient Gaelic festival of Beltane. 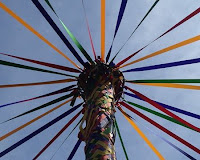 True, our celebration didn't involve spectacular displays of fire or dancing around a May-pole. Rather, we shared a delicious supper of homemade Irish stew. We also enjoyed a lovely Australian red wine and the music of Owen and Moley Ó Súilleabháin. Their album Fields of Grace has been described as "spanning three worlds of sacred expression in one rich soundscape: the old style of Irish Sean-nós, medieval Gregorian chant, and more recent songs from the English hymn tradition." Yes, it was decidedly low key compared to events in Edinburgh, but enjoyable and meaningful nonetheless. 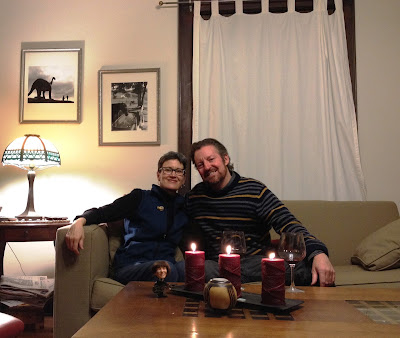 Beltane is the Gaelic May Day festival. In ancient times it was generally held throughout Ireland, Scotland and the Isle of Man at some point halfway between the spring equinox and the summer solstice and marked the beginning of summer. It was the time when cattle were driven out to the summer pastures and when rituals were performed to protect the cattle, crops and people, and to encourage growth.

As Caitlin Matthews notes below, Beltane continues to be celebrated in modern day Britain despite efforts to "quell its rowdy good humor and lusty enjoyment."

Since before dawn this morning, many people all over Britain and Ireland have been up to greet the May, to sing to the rising sun, and to gather greenery and flowers. Others have been preparing to celebrate with May-pole dancing and community festivities, which may include the election and crowning of a king and queen of the May. Most often the holiday royalty was a boy and girl from a local school, but once they would have been the lustiest young man and woman of the district.

This is a day that is still honored in every part of Britain. Despite many efforts to quell its rowdy good humor and lusty enjoyment down through the centuries, it has survived in very good shape up to our own time. The sheer exuberance of May overwhelms the restrictive and humorless reformers who have tried to stop it. 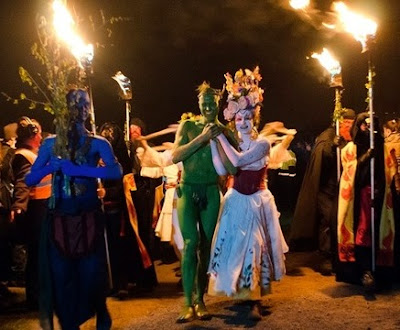 The explosion of May-blossoms, sunlight, and burgeoning life needs expression at this time, when workday commonplaces can be thrown to the far wings and the bright joy of living can bubble up within us with natural ecstasy. All who have waited at dawn to welcome in summer have felt the sudden burst of brightness that ignites the deep happiness of the living earth as the sun rises. 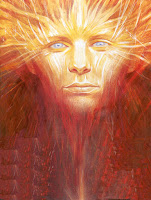 This brightness in the sign of the ancient Celtic god Bel, whom the Gauls called Belenos – the Shining One – the bright fresh splendor of greening summer whose glad arising spreads a shining honey of golden light over the waiting earth. It is hard to witness the sunrise without feeling part of it.

See also the previous Wild Reed post:
• Beltane and the Reclaiming of Spirit
• "I Caught a Glimpse of a God"
• Integrating Cernunnos, "Archetype of Sensuality and the Instinctual World"
• The Body: As Sacred and Knowing as a Temple Oracle
• The Piper at the Gates of Dawn
• The Devil We (Think) We Know
• The Pagan Roots of All Saints Day
• Celebrating the Coming of the Sun and the Son
• Green Destiny
• "Jubilation is My Name": Spring in Minnesota