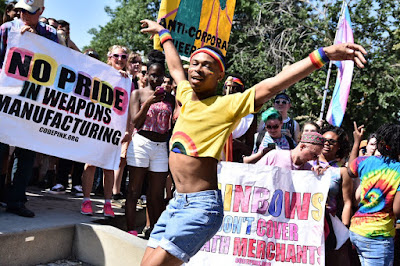 The Wild Reed's 2017 Queer Appreciation series continues with the sharing of a piece I originally wrote in 2003 for an online progressive LGBT community forum that's long since gone. At the time I wrote this particular piece the U.S. (along with its coalition of "the bought and bullied," in the words of Indian author Arundhati Roy) was preparing to invade Iraq – a disastrous endeavor that would lead to the rise of ISIS and contribute to the worst refugee crisis since World War II. We live with these consequences to this day.

In 2003 I was 36 and working as the director of a justice education program at a UCC church in south Minneapolis. I was also the founder and lead organizer of a Twin Cities-based activist group called Queers United for Radical Action (QURA). The members of QURA (and, truth be told, there were never more that a dozen or so of us) described ourselves as a "network of LGBT activists dedicated to educating ourselves and the wider LGBT community on the threats to democracy, human life, and the environment posed by the nexus of corporate globalization, militarism, and environmental degradation." We also sought to organize and participate in educational and non-violent direct action events in order to facilitate positive and radical social and economic change, and to facilitate and share a uniquely queer spirit of resistance to all forms of oppression. In 2002, one of the events we co-sponsored examined the connections between corporate power, racism, and public policy-making. (This particular event is discussed further midway in this previous Wild Reed post).

Why dig up and share today this piece from 2003? Well, because I believe its message is just as important now as it was 14 years ago – maybe even more so. The good news is that as the accompanying images and related off-site links listed at the end of this post show, there are many LGBTQI+ people "making the connections" in the Trump era of today and who are, accordingly, opting to protest rather than parade. This gives me hope. 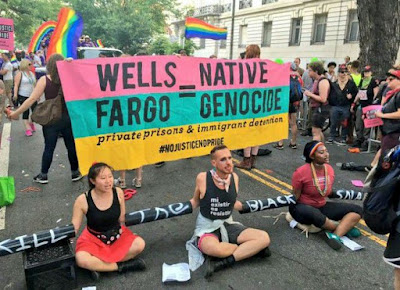 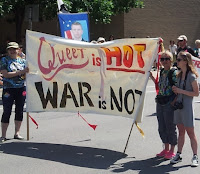 Of course, today, the work of connection-making and coalition-building is understood to be a key aspect of the theory and practice of intersectionality, a term coined by American civil rights advocate Kimberlé Williams Crenshaw to describe overlapping or intersecting social identities and related systems of oppression, domination, or discrimination.

Why are you talking about these other issues? What have they got to do with the LGBTQI+ community? With talk of U.S. military strikes against Iraq and an increase in anti-war activism around the country and the world, questions such as these are often asked within the LGBTQI+ community whenever issues such as U.S. foreign policy, war, and global justice are raised.

As a gay man working for global justice and peace, my response to such questions is to quietly insist that such issues are indeed relevant to the LGBTQI+ community as ultimately we are more than our sexual orientation. This doesn't deny or reduce the significance of one's sexual orientation, but instead recognizes it as one of a number of interrelated aspects contributing to an authentic and whole human life.

I don't believe that being gay automatically makes one more humanitarian, sophisticated, politically savvy, or concerned about the world. I agree with black feminist lesbian Audre Lorde who wrote that "oppression and the intolerance of difference come in all shapes and sizes and colors and sexualities." Still, I am convinced that the experiences of LGBTQI+ people in an often anti-LGBTQI+ world do have the potential to attune us to the oppression of others.

As LGBTQI+ people struggling to live authentic lives within a heterosexist society, we often encounter destructive realities – prejudice, narrow-mindedness, discrimination, and violence. Knowing how such things feel I do not wish to subject others to them. Yet we live within an economic system that demands the exploitation of others – mostly notably the poor of other countries and people of color. It's also an economic system that requires domination and violence for its protection and expansion. For decades the U.S. government has provided this violence – either directly through military "interventions" or indirectly through its support of brutally repressive dictatorships in other countries.

There came a point in my development as a human being when I had to speak out against such an oppressive and exploitive economic system – just as there had come a time in my life as a gay man when I knew I had to speak out against the oppressive realities of heterosexism and homophobia. My life as a global justice and anti-war activist is very much an extension of my life as an out gay man. I see the two intrinsically connected.

I also think that LGBTQI+ folks know very well the oppressive and destructive nature of secrets. Many of us have and/or continue to live in such a way that our true identity is kept secret from others, even those we love.

Secrets are ultimately life-denying. In the U.S. the corporate media colludes – often unconsciously – with corporate interests to keep secret a very disturbing fact: although we're told that it is our love of freedom and democracy that undergirds, shapes, and directs U.S. foreign and economic policy, more often than not it is greed, domination, and violence. And although policy fueled by such realities may provide us with cheap clothes and oil, it also implicates us in the exploitation of workers in other countries and of the environment. Such policy also puts our nation in great danger, ranging from "blowback" terrorist attacks to world-wide ecological disaster.

Why are such realities ignored by our elected representatives and by the media?

Why are so few people aware that the media is owned and in many ways controlled by corporations heavily invested in the making of military weapons, and thus supportive of war?

Why do we allow ourselves to be distracted by trivial pursuits and mindless consumerism?

Why do we tolerate being lied to?

Ultimately, I can only take pride in myself as a gay man if I take pride in myself as a human being. This means becoming aware of my place in all forms of oppressive societal systems. It also means acknowledging that such systems are pervasive to the extent that we all live compromised lives. Nevertheless, we can work with others to dismantle and transform such systems into ones to which we can be proud to belong – as LGBTQI+ people, as human beings. 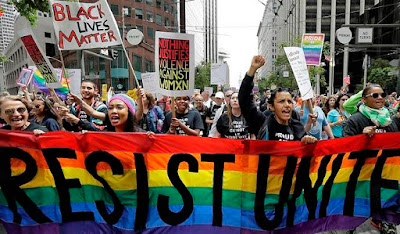 For previous instalments in the The Wild Reed 2017 Queer Appreciation series, see:
• Our Lives as LGBTQI People: "Garments Grown in Love"
• On the First Anniversary of the Pulse Gay Nightclub Massacre, Orlando Martyrs Commemorated in Artist Tony O'Connell's “Triptych for the 49”
• Tony Enos on Understanding the Two Spirit Community

See also the previous Wild Reed posts:
• Reclaiming and Re-Queering Pride
• A Lose/Lose Situation
• A Letter to "Dear Abby" re. Responding to 9/11
• Praying for George W. Bush
• The Tenth Anniversary of the U.S. Invasion of Iraq
• Let’s Also Honor the “Expendables”
• Letting Them Sit By Me
• "It Is All Connected"
• At the Mall of America, a Necessary Disruption to "Business as Usual"