On the First Anniversary of the Pulse Gay Nightclub Massacre, Orlando Martyrs Commemorated in Artist Tony O'Connell's “Triptych for the 49” 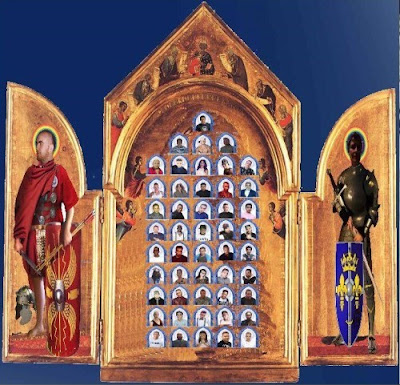 Above: "Triptych for the 49" by Tony O’Connell.

The Wild Reed's 2017 Queer Appreciation series continues with the highlighting of a special work of art commemorating the "Orlando martyrs," the 49 people shot to death a year ago today at the Pulse gay nightclub in Orlando, Florida. The incident also saw over 50 people injured. The Pulse nightclub site is now in the process of being made into a permanent memorial and museum. 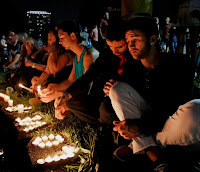 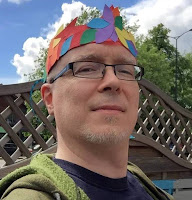 The artwork I highlight this evening is by Tony O’Connell (left), and I must acknowledge and thank Kittredge Cherry and her wonderful online resource, Q Spirit, for first highlighting O’Connell's work in her June 8 post, "Orlando Martyrs: Pulse Gay Nightclub Massacre Remembered in New Artwork 'Triptych for the 49'" (Kittredge has previously highlighted the art of O'Connell. See, for example, here and here.)

One of the newest and most spiritually powerful artworks about the Orlando martyrs is “Triptych for the 49,” a mixed media piece by gay artist Tony O’Connell of Liverpool. It is a shrine shaped like three-part altarpiece. The artist is mounting images of each martyr on reclaimed closet doors, along with queer saints Sebastian and Joan of Arc as “wrathful protector saints.”

O’Connell is working to finish it in time for a private showing on the anniversary of the massacre on June 12. A public exhibit is being planned for later this year. The artist will keep posting updates and new photos of “Triptych for the 49” on O’Connell’s Orlando Martyrs Facebook page as he completes and exhibits the work.

The Orlando martyrs speak to society today through Tony O’Connell’s art. “The world has changed very much in my life but Orlando reminds us that we are all still more vulnerable than polite liberal straight society would like to admit. I think every gay person must have been scarred by the massacre because it reminds us again that there is hate specifically directed at us,” he explained to the Jesus in Love Blog at Q Spirit.

In his new creation, O’Connell made haunting digital images with blue haloes inside Gothic window shapes framing the faces of each person who died in the Orlando shooting. He will arrange them in rows on the central panel, flanked by the guardian saints on two hinged panels. Gold leaf ornamentation adds to the air of sanctity. The whole triptych stands almost six feet tall.

The repetition of the format for all 49 faces allows the individuality of each victim shine through. The viewer’s heart and attention are drawn here and there to connect with different souls: the one in the pink shirt, the one with tattoos, the one with the bowtie . . . 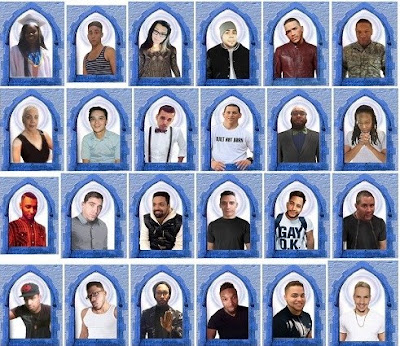 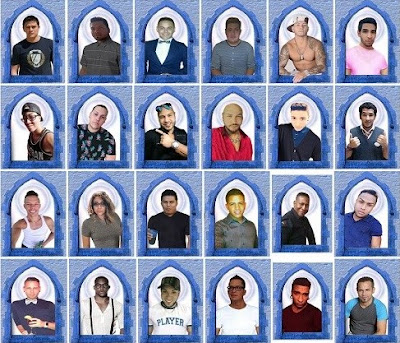 Like standard religious icons, they gaze directly into the viewer’s eyes, seeming to invite conversation. Icons are traditionally considered to be “windows to heaven,” and O’Connell’s commemorative altarpiece provides a glimpse into a queer hereafter.

It is no accident that O’Connell made his shrine to the Orlando martyrs out of wood once used as closet doors. “At some level coming out of the closet is always a revolutionary act of courage because each LGBT person knows on whatever level that the choice to come out could invite potential rejection, or violence or even worse,” he said.

Rainbow haloes indicate that the large figures guarding the martyrs are LGBTQ saints: Sebastian Joan of Arc. Sebastian is a favorite theme in O’Connell’s art and spirituality. He re-enacted the saint’s martyrdom with a sculptural Sebastian to condemn violence against LGBTQ people in a 2015 performance art film. It included a “Litany of the Queer Saints.” He may write a new litany for the Orlando martyrs.

Raised Roman Catholic, O’Connell was rejected by the church when he came out as gay in his teens. He has been a practicing Buddhist since 1995. Much of O’Connell’s work deals with affirming the holiness of LGBTQ lives.

To read Kittredge Cherry article highlighting Tony O'Connell's "Triptych for the 49" and other artists' tributes to the Orlando martyrs, click here. 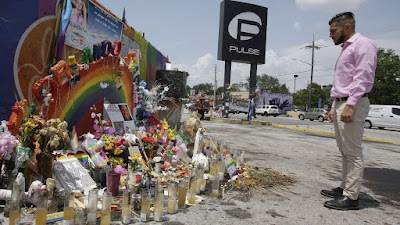 Above and below: Memorials in front of Pulse nightclub in Orlando.
(Photos: John Raoux/AP and Joe Burbank/Orlando Sentinel/TNS/Getty Images) 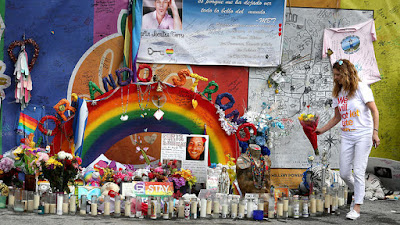 See also the previous Wild Reed posts:
• "I Pray, I Pray"
• Quote of the Day – June 12, 2016
• In the WAke of Orlando, Two Powerful Calls for the Catholic Hierarchy to Fully Acknowledge the LGBT Victims of Anti-LGBT Violence
• Quote of the Day – June 13, 2017
• Multiple Claims Suggest That Orlando Killer Was Also a Victim of Homophobia – His Own
• Prayer of the Week – June 19, 2016
• Discerning and Embodying Sacred Presence in Times of Violence and Strife
• The Ashes of Our Martyrs
• "I Will Dance"

I just wanted to thank you for including my work here. I discovered this post by accident when looking for a link to send to a student. The attack seemed to me to be a turning point when the world started to go mad and nothing really has felt normal since it so I had no choice but to make a visual response to it. I appreciate your help in discussing this work. Solidarity from Liverpool

You're welcome, Tony. . . . And thank YOU for creating such a beautiful and sacred work of art.