Beltane: Casting Off the Darkness and Celebrating the Light

In many parts of the British Isles today, people are gathering to celebrate the ancient Gaelic festival of Beltane.

Historically, Beltane was widely observed throughout Ireland, Scotland and the Isle of Man on May 1, or about halfway between the spring equinox and the summer solstice. Beltane marked the beginning of summer, and was the time when cattle were driven out to the summer pastures and when rituals were performed to protect livestock, crops and people, and to encourage growth. Beltane is one of the four Gaelic seasonal festivals – along with Samhain, Imbolc and Lughnasadh – and is similar to the Welsh Calan Mai.

One of the largest modern Beltane celebrations is the Beltane Fire Festival, held annually on April 30 on Calton Hill in Edinburgh, Scotland. Following, with added links, is how this festival is described by its organizers.

[The Beltane Fire Festival] is a living, dynamic reinterpretation and modernisation of an ancient Iron Age Celtic ritual and is the largest of its kind. Having been resurrected as a practice in 1988 it has become a central focus for our community, bringing many many people together to acknowledge and revel in the birth of the Summer and the fertility of the land. It is important to note that the purpose of our festival is not to recreate ancient practices but to continue in the spirit of our ancient forebears and create our own connection to the cycles of nature.

One of the four quarter day festivals, Beltane saw members of communities come together to celebrate the return of the summer. The observance of this hugely important time in the turning of the wheel of the year was characterised by a celebration of the return of the fertility of the land and would have been a time when livestock would have been put out to pasture. The word "Beltane" roughly translates as "bright fire" and, as such, one of the most important rituals, which survives today in our modern festival, concerns the lighting of the Beltane bonfire. Fire was seen as a purifier and healer and would have been walked around and danced/jumped over by the members of the community. Farmers would also have driven their cattle between bonfires to cleanse and protect them before being put out into the fields. In ancient communities, all hearth fires would have been extinguished and a new neid fire lit which would have then been used to relight people’s hearths in their own homes. In this way the community was connected to each other by the sacred fire which was central to all. The festival would also have been a time of courtship rituals and a celebration of our own fertility!

The important point to note when thinking about our own festival is the joy and the revelry that is fostered in the ritual. It is about casting off the darkness and celebrating the light. It is a time for celebrating fertility, both in the context of our biological functions as well as our own creative energies, the fertility of our creative community.

. . . Although Beltane is known as a joyful celebration with fire, a narrative does guide events. Amongst a cavalcade of characters, and set to the beating of the drums, the May Queen leads Her court around Calton Hill to begin the journey toward summer; her counterpart the Green Man is stripped of his winter guise and reborn. Together they light the traditional Beltane bonfire in celebration of the life and warmth ahead in the summer months.

While these core elements and traditions are respected and retained, each year the volunteer community that brings Beltane together introduces new characters into the mix. Away from the main procession, other storylines are played out as different characters and groups emerge, interacting with each other and audience members – brought to life with giant puppets, stunning costumes and – of course – fire.

Rather than spoken theatre or music performed entirely on stages, Beltane takes a more investigative theatre approach, with few barriers between audience and performer, and performances taking place all around the hill and among the crowd.

Another annual Beltane celebration takes place at dawn on Glastonbury Tor in Somerset, England. The following images are from this year's celebration. 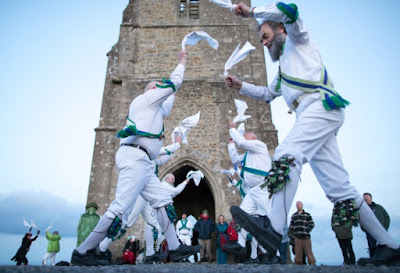 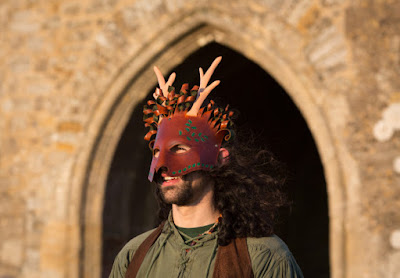 Above: A Cernunnos-evoking attendee at the sunrise celebration of Beltane on Glastonbury Tor, May 1, 2018. (Photo: Matt Cardy/Getty Images)

See also the previous Wild Reed posts:
• Beltane: Celebrating the Sheer Exuberance of May
• Beltane and the Reclaiming of Spirit
• Welcoming the Return of Spring
• "I Caught a Glimpse of a God"
• Integrating Cernunnos, "Archetype of Sensuality and the Instinctual World"
• The Body: As Sacred and Knowing as a Temple Oracle
• The Piper at the Gates of Dawn
• The Devil We (Think) We Know
• The Pagan Roots of All Saints Day
• Celebrating the Coming of the Sun and the Son
• Advent: A "ChristoPagan" Perspective
• Gabriel Fauré's "ChristoPagan" Requiem
• A Day to Celebrate the Survival of the Old Ways
• At Hallowtide, Pagan Thoughts on Restoring Our World and Our Souls
• The God from the House of Bread: A Bridge Between Christianity and Paganism (Part 1)
• The God from the House of Bread (Part 2)
• The God from the House of Bread (Part 3)