Queer Native Americans, Colonialism, and the Fourth of July

The Wild Reed's 2018 Queer Appreciation series concludes with the sharing of an excerpt from John Paul Brammer's July 4 piece at Them on how Indigenous Two Spirit people in the U.S. respond to the Fourth of July and all it represents. As Brammer notes, "When colonialism has erased your heritage, patriotic holidays can feel insulting. Just ask a Two Spirit person." 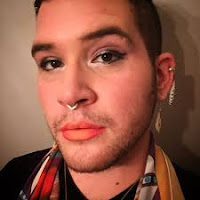 Neptune is a Two Spirit, a traditional gender identity found in many different indigenous North American tribes. “The general agreed upon English translation is ‘Two Spirit’ – someone who has both masculine and feminine spirits,” Neptune says. “Other words I would use to describe myself would include nonbinary, transfeminine and, in my presentation, gender-nonconforming.”

Like many indigenous people in what is now called the United States, Neptune has complicated feelings about public displays of patriotism. Over the course of our conversation, Neptune recalls a story from their family about their relative, Francis Joseph Neptune, who was chief of the Passamaquoddy when the Revolutionary War broke out. “It was the Battle of Machias,” Neptune says. “The Passamaquoddy were defending what is now called Maine. My great, great, great, great grandfather took the first shot, the story goes. Our tribe received a medal of friendship from George Washington.”

That friendship, Neptune says, was short lived. Today, Maine is one of the whitest states in the country, and over time, the Two Spirit tradition within Neptune’s tribe has faded. Neptune attributes this to the legacy of American colonialism. “Even asking my own elders about Two Spirits, they would say, ‘We used to have them a long time ago, but we don’t have them now,’” Neptune says. “Being young and knowing I was a Two Spirit, that made it more difficult.”

Ryan Young, a member of the Lac du Flambeau Ojibwe Tribe who also identifies as Two Spirit, echoes Neptune. “I personally don’t participate in Fourth of July celebrations,” Young says. “I think it’s particularly difficult to want to celebrate with all that has been happening with indigenous people at Standing Rock and with undocumented folks.”

Young notes that they have researched the Fourth of July in the past, and mentions that they found in the Declaration of Independence a reference to “merciless Indian savages,” which makes it all the more difficult to feel any sense of pride for the United States. “It’s right there in the document,” they say. “It’s hard for me to celebrate this day when there’s such a disconnect between mainstream society and understanding of history from an indigenous perspective.”

Alivia Jene, a Two Spirit person from the Penobscot tribe, also approaches the Fourth of July from an indigenous perspective, preferring to celebrate “interdependence day” as opposed to Independence Day, in keeping with the communal nature of Native American culture.

“I’m one of those people who don’t stand during the Pledge of Allegiance,” she says. “I was lucky to go to a Bureau of Indian Affairs school where we didn’t have the Pledge of Allegiance. All of these symbols of patriotism have always been incredibly abrasive and hypocritical. We need a more complex understanding of the history of this country that has been based on genocide and colonization.”

Jene says her Two Spirit identity contrasts with the American concept of queerness, in that it is related to social and ceremonial responsibilities within her tribe, a commonality among Two Spirit people today that harkens back to the tradition’s pre-colonization roots. “For me, Two Spirit incorporates gender, sexuality, and social roles,” Jene says. “Two Spirit more accurately describes me than other words do.”

Being Two Spirit in our modern age means decolonizing one’s conception of gender and sexuality, in order to better understand one’s own identity. This is true for Jene, Neptune, and also for Young, who had to do independent research to rediscover the Two Spirit tradition in their tribe, which colonization had obfuscated over time. “There’s a lot to learn about queerness in both American society and our own tribal communities,” they say.

. . . As Americans break out the grill and shoot off fireworks to celebrate Independence Day, we ought to take the time to consider whose land the United States was built on, and who was forcibly moved to make room for Europeans. Indigenous communities still exist, mostly in reservations they were forced to live on. Colonization has taken much of their history from them, and, in the cases of indigenous queer people, left them without the respect they once had in their tribes.

Young speaks on their tribal community needing to dismantle the homophobia and transphobia that has been ingrained into their culture due to European ideologies. In doing so, they say something that could apply to non-indigenous Americans as well: “You can still have love for where you’re from, and be critical of how it needs to change.”


See also the previous Wild Reed posts:
• Tony Enos on Understanding the Two Spirit Community
• North America: Perhaps Once the "Queerest Continent on the Planet"
• Clyde Hall: "All Gay People, in One Form or Another, Have Something to Give to This World, Something Rich and Very Wonderful"
• Quote of the Day – November 12, 2011
• John Corvino on the "Always and Everywhere" Argument Against Gay Marriage
• Same-Sex Desires: "Immanent and Essential Traits Transcending Time and Culture"