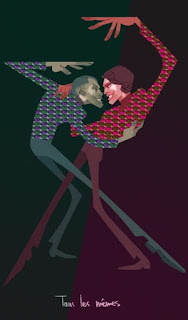 A musical interlude this sultry Sunday afternoon with "Tous les mêmes" by Stromae. About this song and its music video, Wikipedia notes the following.

"Tous les mêmes" (French for "[They are] All the Same") is a song by Belgian singer Stromae, released in 2013. The song has peaked at number one on music charts in both Belgium and France. The music video, directed by Henry Scholfield, was released on YouTube on December 18, 2013 and features Stromae partly dressed as a woman. The track shows the life of female Stromae, annoyed with the attitude of men and what they do. Throughout the video, Stromae depicts various stereotypical remarks women make about men, accompanied by the non-verbal cues the other characters in the video make. The lighting effects in the video (green light for male Stromae, pink light for female Stromae) aid the interpretation of the song. The video has received over 200 million views as of June 2018. 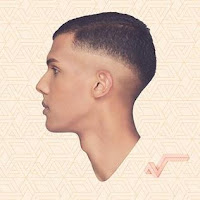 I must admit the lyrics of "Tous les Mêmes" (translated below) don't resonate with me at all. I know they're supposed to reflect an argument between two (heterosexual) lovers but they're just too petty and catty, and too reliant on stereotypes, for my liking. Perhaps that's Stroman's point: the ridiculousness of so many interpersonal clashes. What I do appreciate, however, is the song's overall sound and its music video, especially the latter's dance sequences.

All you men are all the same
Macho but cheap
A bunch of unfaithful fools
So predictable, I’m not even sure you deserve me
You’re lucky that we love you
Go on, thank me

The beginnings of another argument
Between Stromaette and her boyfriend:
Take one last look at my ass
It’s right next to my suitcase
Say goodbye to your mommy
Who puts you on a pedestal
You have no idea what you’re losing
You’ll never find anyone as good as me
What? You wanna break up now?
You’ve got it all wrong
I was only saying that to get a reaction
And you were actually thinking about it!

It’s easy to say I’m whiny and emotional
And I talk too much “blah blah blah”
“But no no no, it’s important
That thing you call your ‘period’”
You know, life is for having kids
But as always, “It’s never the right time”
Oh, sure, you’re there to make them
but will you be there to raise them, too?

All the same and we’re fed up 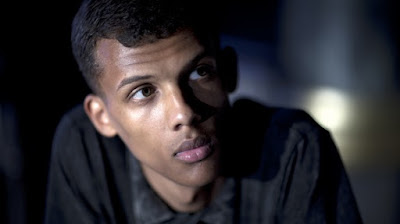